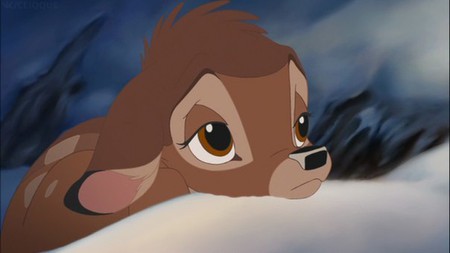 It’s hard to believe Disney’s Bambi is now 75 years old. To celebrate one of the ultimate ‘right in the feels’ movies of all time, we look back at other childhood films that to this day make us ugly cry. SPOILERS AND SAD TIMES AHEAD. 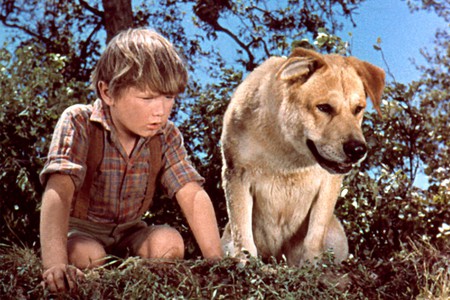 Dog movies are particularly ripe for this list. We’ve got another one later on, but we could have featured the likes of Turner & Hooch (1989) or the criminally underrated Richard Gere effort Hachi: A Dog’s Tale (2009). All things considered, though, we had to go with this early Disney film in which a young boy forms a bond with stray dog, only to cruelly see his pet put down due to sickness. As if that wasn’t enough, when one of Old Yeller’s pups imitates his habit of stealing meat, the whole cycle begins again. Just beautiful. 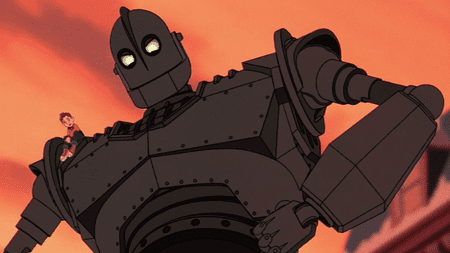 The title character has recently been resurrected by Steven Spielberg in the trailer for his upcoming adventure movie Ready Player One, which straightaway gives you a clue as to the impact The Iron Giant had on unsuspecting kids in 1999. An alien crash lands in Rockwell, Maine, and is befriended by a young boy during the Cold War. As government agents close in, the otherworldly robot is forced to sacrifice himself to save the town now his home.

There’s an urban legend the chrome dome of the metallic robot was inspired by the actor voicing the part… which was none other than Vin Diesel himself… ah, that’s why it looked so familiar.

You might also like: It’s Back to the Future in Spielberg’s Insane Trailer for Ready Player One 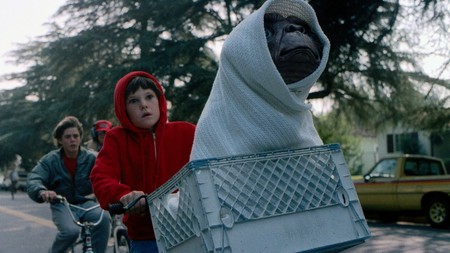 Steven Spielberg has a lot to answer for. He made a generation afraid to go into the sea with Jaws (1975) and then turned us all into amateur adventurers with his Indiana Jones series. In-between, he gave us this classic featuring a lovable alien desperate to get back home. It’s the ultimate 80s film before the decade lost its cool, and losing your cool is just what you’ll do when ET and Elliot ride off into the moonlight. 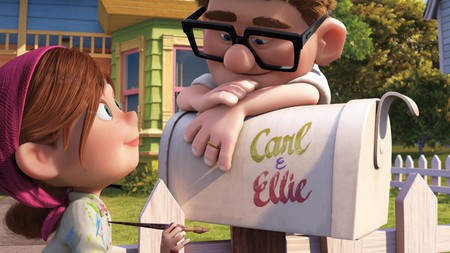 Thinking about the opening sequence of this Pixar film still brings up way too much emotion. The romance between Carl and Ellie, from their tentative first moments together to her passing away, touches every sentimental bone. The montage reaches out to every relationship you’ve ever experienced and plants just enough hope in among the waves of sadness to make you turn to your loved ones and give them a warm hug.

Rumour has it that Pixar executives almost cut this beginning, fearing it would have ruined the movie. As you’re wiping away the tears and sobbing about the pointlessness of it all, you might wish they had…

You might also like: 7 Reasons Why Kuch Kuch Hota Hai Is the Biggest Tearjerker in Bollywood Cinema 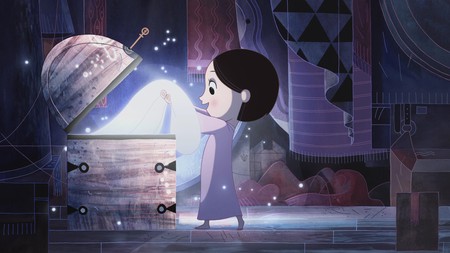 Song of the Sea | © Studiocanal

It’s not just Pixar that aces emotive animation. This Oscar-nominated Irish effort (co-produced with companies in France, Belgium, Luxembourg and Denmark) tells the story of a boy and his mute sister, whom he blames for the death of their mother. It turns out the girl is a selkie – a mythic creature that can switch between human and seal form – and together, brother and sister adventure into a magical world. Song of the Sea avoids whimsy despite its animation style, and instead gives us a superbly contemplative piece of work. It also tugs so hard at the heartstrings you can hear them ping as they snap. 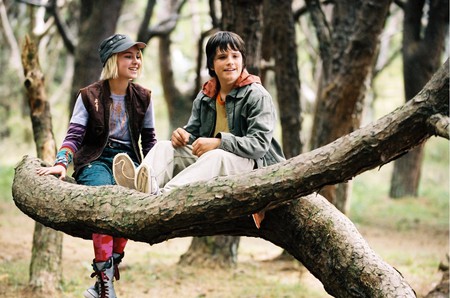 It felt like kids’ films were going to be left to Pixar following the monumental success of their first animations. Live action had lost its magic, and things could be done cheaper (and arguably more effectively) using computers. Bridge to Terabithia changed the game by combining live action with a small dose of fantasy. Don’t get lost in the ogres and fairy tales though, because the final act takes a dramatically dark turn even a song from Zooey Deschanel can’t lighten. 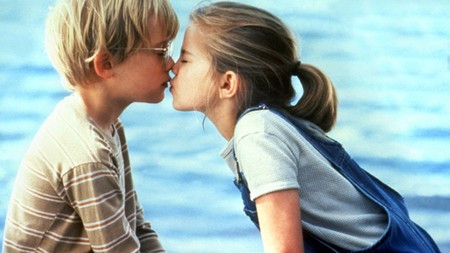 The more cynical among you might be thinking that a film that sees Macaulay Culkin being stung to death by bees can’t be all that tragic… well it is. So there.

The Home Alone star actually turns in a great performance as the best friend of Vada (Anna Chlumsky), an 11-year-old that blames herself for her mother’s death. The movie looks at the effects of grief and growing up with a real sting in the tale. Pun intended. 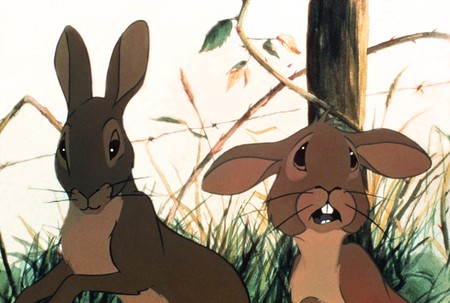 This adaptation of a Richard Adams novel has traumatised British kids (and most grown-ups too) ever since it was first screened in the late 70s. By modern standards, the animation might look crude and rough around the edges, but trust us, you won’t notice once you get into the story.

There are violent scenes early on, but it’s the final moments which will leave you in the dumps. 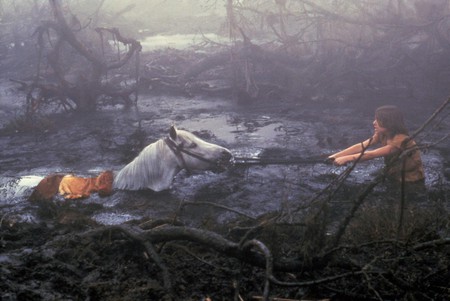 For a long time, The NeverEnding Story was treated as a punchline. It had a cheesy soundtrack complete with title track from Limahl and was something we were forced to watch over and over again at school whenever it rained. It rained a lot in the 80s.

Just like everything made in that decade though, the film is now considered a cult classic and that’s in no small part due to the death of a beloved character in the appropriately named Swamp of Sadness. Poor Artax. 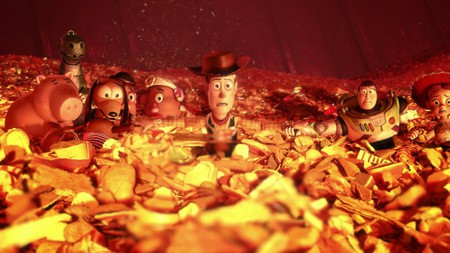 Damn you Pixar *shakes fist at sky*. Just when we thought it was safe to go back into the cinema, this sequel had us bawling like babies. Once again, Woody, Buzz and friends were in peril, but there seemed to be no escape for our favourite characters this time around. As a furnace looms in the distance, the gang hold hands fearing the worst, and we hide behind our popcorn hoping against hope that things will be okay. 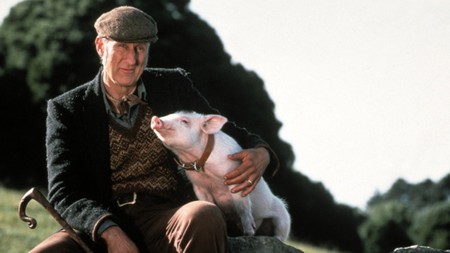 For all the tragedy that the tenacious pig Babe suffers over the course of the film, the real kicker is when his gruff owner Farmer Hoggett (James Cromwell) calmly praises his prize sheep-pig with a casual ‘That’ll do pig. That’ll do.’.

We rarely see emotion from the man, and Babe has constantly sought that sort of praise from his human companion… when it arrives, we’re in floods. 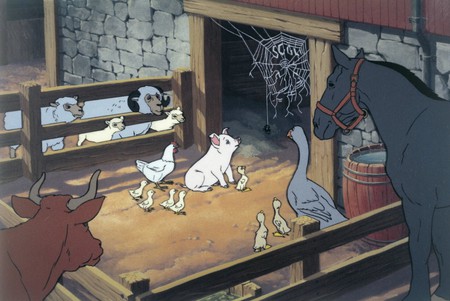 The book was traumatic enough, but seeing Charlotte the spider bring up the piglet Wilbur only to die from exhaustion after giving birth is devastating.

This is bizarrely a Hanna-Barbera production but isn’t typical of the frothy entertainment they otherwise made. It is heavy stuff, and whatever you do make sure you stick with this version and not the dreadful remake that featured the voice of Oprah Winfrey… 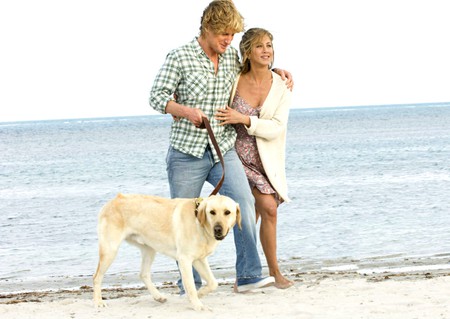 This wasn’t supposed to end this way! On the surface, Marley & Me is set up like a typical rom-com with a couple (played by the attractive, if slightly annoying, pairing of Jennifer Aniston and Owen Wilson) relocating from the city to further their careers as reporters and firm up their marriage.

As they contemplate having children of their own, they decide to adopt a dog (the Marley of the title). Over the next few hours we see the family grow and everything seems perfect, bar a few Marley-related comedy hijinks… then the flippin’ dog dies and you wonder what the heck just happened!?! This one fools us every time, we think it’s going to be fine and then WHAM!

Definitely a film after which to just curl up under the duvet and not speak to anyone for a week.