British Films Funded By The EU Before Brexit

Colin Firth and Helen Bonham Carter in The King's Speech|©CC BY 2.0/Wikicommons

Before the British people headed to the polls on referendum day, a pro-EU letter bearing the signatures of some of the most successful, significant or acclaimed figures in British film was published in The Telegraph. Featuring the names of Keira Knightley, Richard Curtis, Helen Bonham Carter, Bill Nighy, Danny Boyle, and Chiwetel Ejiofor among hundreds of other artists, actors, filmmakers and producers, it was an appeal for voters to recognise the vital role played by the EU in the creative industries. Here, we take a look at what the EU has offered the British film industry, as well as some of the extraordinary films that have counted on its support.

Creative Europe, the EU’s funding programme, replaced the separate MEDIA and Culture programmes in 2014, bringing all creative, cultural and audiovisual sector funding together. With a budget of €1.46 billion for 2014-2020, it’s a major source of funding across the arts — in film, financial support is given to small cinema owners, festivals, distributors and, of course, producers and filmmakers.

To see the success of EU-backed cinema, you need only look to this year’s Cannes Film Festival, where a total of 23 films supported by Creative Europe were entered, 11 winning prizes. Veteran British filmmaker Ken Loach won the Palme d’Or for his acclaimed I, Daniel Blake, which received close to €100,000 from Creative Europe to support its development and distribution. One of the key facets of the EU funding programme is its independent approach. While it tends to support films that will be able to travel well across borders, its decision-making process is more akin to the National Lottery funding than a cut-throat, commercially-minded system — funding applications are evaluated by a committee of independent experts from the arts. 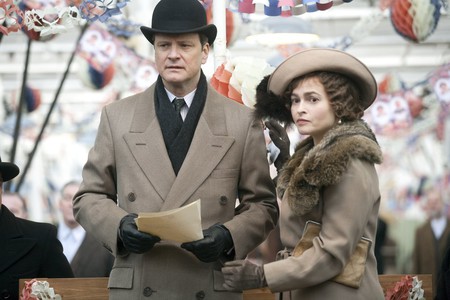 Helen Bonham Carter and Colin Firth in The King's Speech | ©CC BY 2.0/Wikicommons

Between 2007 and 2013, the UK’s audiovisual industry received €100m in funding from the EU’s MEDIA programme. During the first two years of Creative Europe (2014 – 2015), 230 UK cultural and creative organisations and audiovisual companies were supported by funding, while grants totalling €40 million went towards the cinema distribution of 84 UK films in other European countries, a vital market for filmmakers. In the last ten years, 40% of UK film exports have gone to the EU, helped along by the absence of export tariffs. Below are some of the many extraordinary films that exist thanks to the EU.

This stylish 2011 film by Steve McQueen explores the theme of sexual addiction through a pair of grown siblings played by Michael Fassbender and Carey Mulligan. While the film (which was made for an estimated $6,500,000) was lauded by critics, appearing on several top ten lists and winning numerous awards, Shame tackled the kind of taboo subjects that will always make for risky business, commercially speaking. It made just $3,909,002 domestically. Almost 78% of the film’s gross takings were from foreign markets.

However, it earned over €308,000 through MEDIA’s Automatic Scheme, which rewards grants to distributors based on the box-office success in countries that the film is not national to. So distributors that picked up the commercially risky Shame were reassured by the fact that they would see an added return on their investment.

Iain Canning, the producer at See Saw films (the independent production company that co-produced Shame along with Film4 and the UK Film council) said that, “It is incredibly important for us producers that MEDIA helps us maximise the international market potential of our films by offering grants to distributors. This results in moving some of the risk and allowing them to be more adventurous in their acquisition choices. […]

“Shame was the type of film where that extra reassurance for the project allowed distributors to be bold with their campaigns and less vulnerable to market forces,” Canning added.

Starring Steve Coogan and Judi Dench, Stephen Frears’ Philomena was critically acclaimed around the world and received numerous international film awards. It tells the heart-breaking true story of Philomena Lee’s 50 year search for her son, who was forcibly taken from her at an Irish convent when she was a teenager. She is helped in her search by an out-of-work reporter, played by Coogan.

Philomena received substantial distribution support from Creative Europe, with grants to its distributors numbering over €400,000. It was distributed in the UK by Pathé, the company’s Cameron McCracken praising the funding for having “greatly facilitated the financing and distribution of the film” by allowing Pathé International to pre-sell distribution rights across the continent, with other distributors incentivised by the promise of returns from Automatic funding. The ability to pre-sell distribution rights can be hugely important for independent productions, giving them greater funds and security for production.

With four Oscars under its belt and many other accolades, it’s hard to believe that Tom Hooper’s The King’s Speech had a hard time securing funding. The grand period drama stars Colin Firth, Geoffrey Rush, and Helen Bonham Carter, and tells the inspirational tale of how King George VI learned to master a speech impediment after his brother abdicated the throne in the lead up to the Second World War.

When presented with the script, the BBC and Film4 both turned it down. Alongside a £1 million grant from the UK Film Council, said by some to be the only reason the independent production was made and for which the Film Council was roundly praised, The King’s Speech also received nearly €900,000 from MEDIA to help with distribution. Shouldn’t the EU get equal credit, then?

Alongside bodies such as Film4, BBC films and the BFI, one of the great benefits of the EU’s funding programme is its willingness to support less commercial productions and new talent. Cult classic Submarine, a comedic coming-of-age tale, was the directorial debut of writer-director Richard Ayoade, best known from The IT Crowd. The film was extremely well-received and was followed by Ayoade’s equally lauded The Double in 2013, which starred Jesse Eisenberg and Mia Wasikowska.

Submarine virtually crowd-sourced funds for its production (its budget was just over £1 million) from a range of sources including Film4, the UK Film Council, and Warp Films. From the EU it received almost €150,000 from Automatic funding (allowing it to be released in 11 countries), almost €60,000 in distribution and marketing support through the Selective Scheme, and extra funding to promote it at the Toronto Film Festival.

The acclaimed LGBT comedy-drama Pride tells the true story of lesbian and gay activists who raised funds to support families during the miners’ strikes of the Thatcher years, while the film itself did a great job of raising funds too, thanks to the EU. Produced by BBC films, the BFI and some small production companies, Pride received the largest amount of any UK film in the first two years of Creative Europe — a huge €1 million, to help with its distribution across the continent. Pride was screened in the Director’s Fortnight at Cannes, where it was awarded the Queer Palm.

While these are just a few examples, the list of British films that have benefited from EU grants and development money could go on and on. They include Suffragette, the Amy Winehouse documentary Amy, Macbeth, and small productions like Fish Tank and Wuthering Heights, both directed by Andrea Arnold.