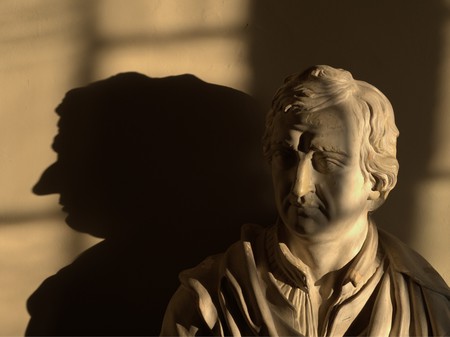 The great essayist William Hazlitt wrote of Lord Byron that: in ‘slovenliness, abruptness and eccentricity… Lord Byron… surpasses all his contemporaries.’

George Gordon Byron, the most extravagant rock-and-roll bad boy poet of the Romantic Period, was best known for his narrative poems Don Juan and Childe Harold’s Pilgrimage, as well as his notorious sexual escapades and scandals, aristocratic excesses and a lame club foot. However, he was a true English eccentric, possessing an fascinating aura which few men and still fewer women could resist. Here are some strange facts about Byron.

Byron was born in London in 1788. His birthplace now occupies a branch of John Lewis. He had a frenetic energy inherited from his womanising navy father, ‘Mad Jack’, who cut his own throat. From his mother, he inherited her weight problem. He was five feet nine inches tall, but at one point he weighed over 14 stone. Young George tried every fad diet going; from drinking glasses of sour vinegar and chewing gum made from pine sap to eating plates of only mashed potato and bingeing one day and starving the next. He was rampantly bisexual and thought ‘men were cleverer but women kissed better.’

After a long relationship with his half-sister (leading to one child), he had affairs with actresses, married society women and many young men, so that by the age of 21, he had raging cases of gonorrhoea and syphilis. Love didn’t come in a triangle for Byron but something closer to a pentacle. His level of celebrity was mind-boggling, a ‘Byromania,’ akin to a Regency Elvis Mania, where the Byronic look was mimicked everywhere in mirrors, in the hope of catching the curl of the upper lip, and the scowl of the brow. 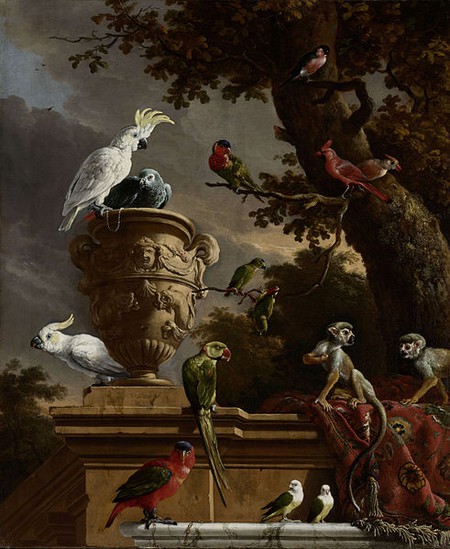 Byron’s Ark: A Zoo With A View

For unconditional, genuine love, there were always animals in Byron’s life. While he was studying at Cambridge, he was told all pet dogs were banned (wanting his bulldog Smut living in his dorm). Byron was so annoyed he bought a tame bear instead. He’d walk the bear around the grounds on a chain like a dog and got great pleasure from the terrified reactions.

Byron tried to get the bear enrolled as a student. He said, ‘I have got a new friend…a tame bear…they asked me what I should do with him, and my reply was, ‘he should sit for a fellowship.’ Later in life in his palazzo in Venice, he kept a menagerie. His close friend Percy Shelley describes this arrangement: ‘Lord B’s establishment consists…of ten horses, eight enormous dogs, three monkeys, five cats, an eagle, a crow, and a falcon…just met on the grand staircase five peacocks, two guinea hens and an Egyptian Crane.’ 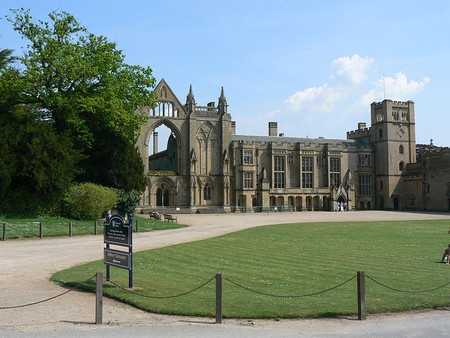 Married To The Macabre

Byron had a fascination for the supernatural — so the reputedly haunted seat of the Byron family, Newstead Abbey, became a favourite venue for Byron’s entourage. His gothic flamboyance perpetuated this sense of the spooky. A coffin stood at one end of the dining room, which Byron had turned into an indoor shooting gallery. Skulls of the monks who had been at buried at the abbey and Byron’s own ancestors from the family crypt were used as flowerpots that lined the walls. He also had a drinking mug made from one of these monkish skulls and served drinks in others. Byron and his friends even wore long, dark, hooded robes as worn by medieval monks, for their soirees. When Percy Shelly was cremated, Byron asked if he could keep Shelley’s skull but he was refused because of his fetish for using them as goblets. 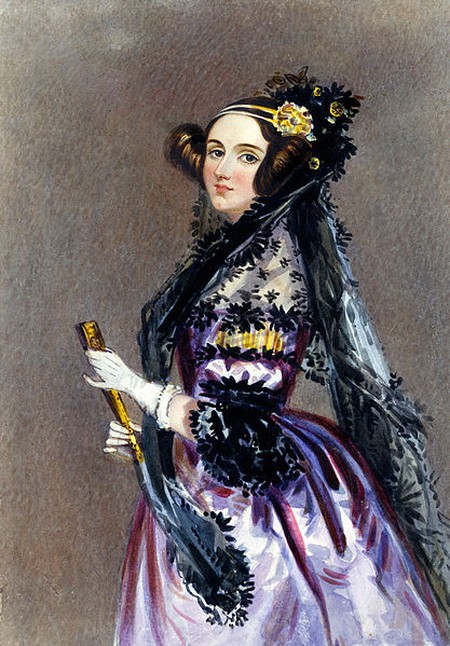 A Chip Off The Old Block

Ada Lovelace was Byron’s only legitimate child. Byron separated from her mother a month after Ada was born and left England forever four months later, eventually dying of disease in the Greek War of Independence when Ada was eight in 1824. Ada’s mother remained bitter towards Lord Byron and promoted Ada’s interest in mathematics and logic in an effort to prevent her from developing what she saw as the insanity seen in her father.

However, Ada remained interested in Byron despite this (although he never had a relationship with her) and was, upon her eventual death, buried next to him at her request. Ada worked with mathematician Charles Babbage on the Difference Engine, a calculator, and the Analytical Engine, a mechanical computer for which she wrote the world’s first algorithms. She showed amazing foresight concerning the abilities of computers to do more than deal with numbers. Ada was the world’s first computer programmer and the programming language ADA was named in her honour. She died at 36, the same age as her father. In her final years she was like her father in other ways, including romantic scandals, problems with alcohol and opium, and gambling debts. 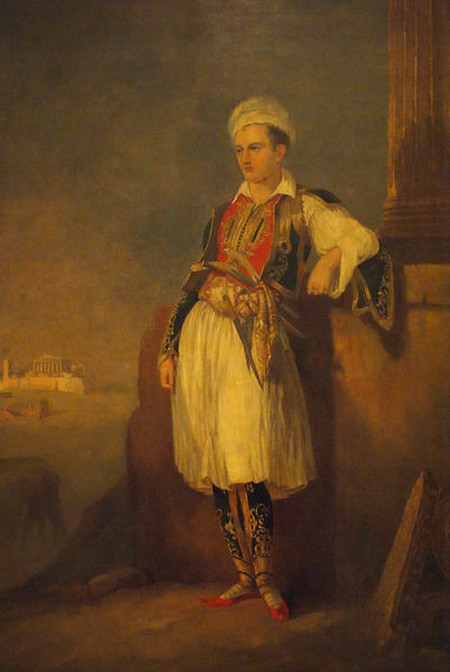 Byron savoured being a faux military General. He constructed two small stone forts on the edge of his lake and launched a fleet of toy ships, which he spent entire days directing while hidden in his fort. He even got his servant to sit still in a small boat in the lake and ‘command the ships’, involving pushing them around and making cannon and whistle noises with his mouth.

A Student of Armenian

Escaping from Britain with a cloud of infamy hanging over him led Byron firstly to Venice, where his singular preoccupation was to learn Armenian. Venice was and is the home of the Mekhitarist Congregation, a collection of Armenian monks who had settled there. He was impressed by the monks ethos and the rich language. Today, Byron’s brief interaction with the Armenian community of Venice is celebrated with a preserved room where he worked, with items he used. He was the first Westerner in the modern era to take an interest in Armenian culture. 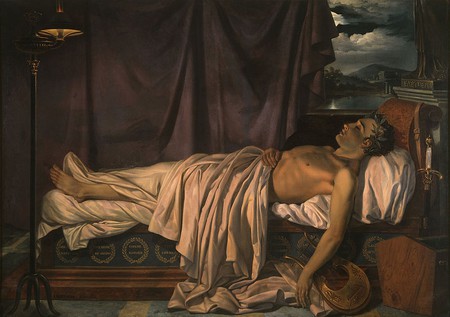 An Archetype For Count Dracula

During his summer with the Shelleys at Lake Geneva in 1816, Byron suggested the group spend a rainy afternoon writing ghost stories. Mary Shelly wrote what became Frankenstein and Byron’s doctor William Polidori wrote ‘The Vampyre’, the story that inspired future interpretations from Dracula to Twilight. This vampire story was read all over Europe and based on a literary idea by Byron himself (the story was first published under Byron’s name originally explaining the great interest). The type of vampire in the story was wholly new. Previously the vampires in European folklore were peasants and villager spectres, dirty with talon-like fingernails as seen in Werner Herzog’s Nosferatu.

By contrast, Polidori’s vampire is rich, aristocratic and weighed down by ennui — much like Byron himself. The vampire is called Lord Ruthren, a name that can be linked back to Byron, as one of his former lovers Lady Caroline Lamb created a villain called Lord Ruthren Glenarvon, incidentally written as revenge against Byron. Lord Ruthren has cold grey eyes, it is impossible to know what he is thinking and he mixes with the cream of high society. He is liked, but is a secret predator eager to lead the virtuous astray with his charms — traits which are familiarly Byronic.