21 Reasons Why Oasis Is So Popular 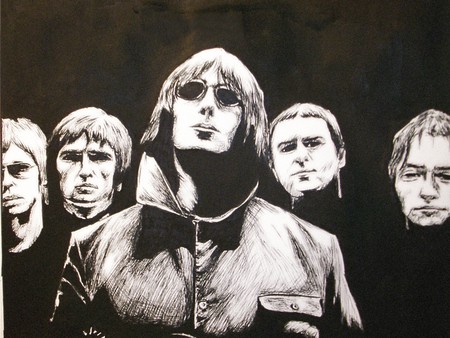 British rock band Oasis was formed in 1991. While they broke up in 2009, the band remains extremely popular even today. Their great lyrics continue to inspire listeners all over the world, while the unique style of the band remains recognizable everywhere. Review the most impressive songs by Oasis and discover what is so special about this rock band from Manchester.

Who has never dreamed of becoming a rock star? Oasis’ song ‘Rock’n’Roll Star’ is the opening track from their debut album Definitely Maybe released in 1994. Britpop in style, this song represents the ideas of Noel Gallagher – the band’s lead guitarist and songwriter. ‘I’ve pretty much summed up everything I wanted to say in ‘Rock ‘n’ Roll Star’, ‘Live Forever’ and ‘Cigarettes & Alcohol’, after that I’m repeating myself, but in a different way’ – said Noel. Moreover, no other song better exhibits the musical style of the band. Maybe these are the reasons why the band’s fans love this track more than others.

Noel was inspired by The Rolling Stones’ ‘Shine a Light’ and wrote the ‘Live forever’ in 1991 before he joined the band. This song is the first Oasis single to enter the top ten in the United Kingdom, which is not surprising. With a slight taste of grunge, this powerful track reveals impressive lyrics with a highly positive outlook. Simple but meaningful, it can definitely find a way to touch any heart. ‘Live forever’ is probably the best song to listen tp during hard days or periods of spleen.

The second song to enter the UK’s top list, ‘Cigarettes & Alcohol’ represents the rough musical attitude of the band and points out a serious social problem. The lyrics state the appeal of cigarettes, alcohol, and drugs among the working class in Britain in the mid-1990s. However, the idea of this song remains topical even today. Mighty guitar riffs in the beginning are followed by jagged rock-n-roll chords, while Liam Gallagher (the band’s vocalist) sings in his own unique style.

The debut single of the Oasis ‘Supersonic’ has a notable history. It began as warm up before the recording of ‘I Will Believe.’ However, the intended track was not going well, so the band decided to work on something new. The concepts created during the jam were taken as a base. The recording of the whole track was completed in just 11 hours and it was never remixed. Fun fact: Elsa, who appears in the song, refers to the rottweiler, the pet of the sound engineer Dave Scott which was in the studio that day.

‘Acquiesce’ is widely considered to be the best b-side track ever. The song is outstandingly popular with its music complementing the delicious lyrics, while the refrain is just perfect. Noel Gallagher explained that this song ‘is about friendship in the widest sense.’ ‘Acquiesce’ is probably the best song to use to tell your friends how much you appreciate them. It should be mentioned that ‘Acquiesce’ is the first song to ever feature both Noel and Liam on lead vocals.

‘Some Might Say’ was the first single by Oasis to reach the top of the UK Singles Chart. Noel Gallagher stated in an interview that this track was the ‘archetypical Oasis song’ and ‘define[d] what Oasis is.’ ‘Some Might Say’ is a catchy blend of pure pop and brutal guitar raunch. At the same time, the lyrics have thousands of interpretations: each listener has found their own inspiration and meaning behind the text of ‘Some Might Say.’

Don’t Look Back in Anger

‘Don’t Look Back in Anger’ features Noel Gallagher instead of Liam on the vocals. The week after the song was written, it was revealed to the public during the show at the Sheffield Arena on 22 April 1995. The title was provided as a reference to David Bowie’s 1979 song ‘Look Back in Anger’. However, Noel said that he doesn’t know anybody called Sally and that that was just the name which fit the lyrics best. ‘Don’t Look Back in Anger’ is Oasis’ signature song, which has gained a huge appreciation by music lovers all over the world.

The Importance of Being Idle

Go Let It Out

Noel considers ‘Go Let It out’ to be one of the best songs he has ever written. The song was released in 2000 and became one of the most successful tracks by the band. Even though critics have called the whole Standing on the Shoulder of Giants album ‘disappointing.’ Nevertheless, the song made it to silver on the singles chart. ‘Go Let It Out’ is surely Oasis-type of music, but the lyrics are actually referring to R.L. Sharpe’s poem ‘Bag of Tools.’ This track is a highly motivating song for every destiny-builder.

After Noel Gallagher first performed ‘Whatever,’ the band knew it would become a hit. And so it was: ‘Whatever’ is the first Oasis song to enter the top-five. A remarkable feature of the song is its unusual structure. The way melody flows suddenly changes in the middle and then slowly returns to the main chord progression. At the same time, the lyrics exhibit teenage feelings and ideas, which are still relevant today. In the first line, Noel touches on his conflict with his father, who forced his son to become a builder.

All Around the World

The track ‘All Around the World’ is the longest song by Oasis. Though this song was one of the first written by Noel, it did not appear in the band’s first two albums and was released only in 1998. The single went gold in the UK. Filled with long instrumental sections, this song received good reviews from the critics. Noel explained in one of the interviews that he was very ambitious about ‘All Around the World’ and wanted to release it in a very extravagant manner, but the band could not afford such production.

‘Don’t Go Away’ is one of the saddest songs by Oasis. Its origins date back to 1993, however, the song was only recorded in 1997. The heartbreaking lyrics explain a touching break-up. There are two general theories as to what this song is about. Either it is about the Gallagher brothers’ mother, who was hospitalized with a cancer scare, or it was based on guitarist Paul Arthurs‘ story, whose mother Delia died of cancer around then. Either way, the stunning guitar riffs and the emotional vocals of ‘Don’t Go Away’ leave no nonchalant listeners.

Half the World Away

‘Half the World Away’ is an adaption from ‘This Guy’s in Love With You’ by Burt Bacharach. The slow acoustic melody with a great impact by keyboards is balanced by meaningful lyrics. The lyrics represent the same idea as the ‘Rock’N’Roll Star’: a desire to escape from the sluggish life. However, the text goes over Noel’s own story of how he aimed to move onto bigger and better endeavors, while part of the chorus is supposed to be about brothers’ nasty fight in Australia, after which Liam left for England in a bad mood.

Let There be Love

‘Let There be Love’ is another song with both brothers featured in lead vocals. Released in 2005, the song became very successful, while the critics admitted that the band seemed to have returned to their original form. Noel said it took him eight and a half years to write this song. Calm and slow, ‘Let There be Love’ increases with its music as instruments join the tune. Then the music suddenly stops, but the guitar and piano come back for the song to proceed. The vocals represent a dialog between brothers, who come to the agreement in one thought – ‘Let There be Love.’

‘Little by Little’ is an outstandingly philosophical song by Oasis. Noel expresses his thoughts about life and relationships through it. A common theory states that both Noel and Liam were getting divorced at the time the album was being created. With a slight taste of melancholy, this song surely has positive notes, mostly in its melody. The calm tune reaches its peak at the end of the pre-chorus and becomes a mighty blend of Noel’s vocals and guitar parts in the chorus. The overall feeling left by the song is one of inspiration. However, the ideas stated by the lyrics are worth thinking of.

Energetic and jiving ‘Lyla’ is pure Oasis style. The raunch of the guitar opens the song and only after Liam’s peculiar vocals appear, the rest of the instruments join in. The music appears as highly organized mess, while the vocals lead the way. Probably, that is why this is one of the band’s catchiest songs. Noel called ‘Lyla’ the ‘poppiest’ song since ‘Roll With It.’ He also explained that Lyla was Sally’s sister, referring to ‘Sally’ from ‘Don’t Look Back in Anger.’

The title ‘morning glory’ can be explained with many theories, though all the same in their core idea. A kind of flower with the same name blossoms early in the morning and closes by noon. Moreover, a horse, which runs well, but doesn’t finish strong in races, is also called a ‘morning glory.’ Blooming early and fading fast is the main idea of the song, which talks about someone addicted to drugs. While the remarkably vigorous music proceeds, Liam begs drug users to ‘wake up’ and realize that they are ruining their lives and their futures.

‘Wonderwall’ is probably the best known Oasis song. This is not surprising, as the song reached the tops of charts in 13 countries. According to Gallagher, ‘Wonderwall’ describes ‘an imaginary friend who’s gonna come and save you from yourself.’ The name and the music are based on George Harrison‘s instrumental album Wonderwall Music. It should be mentioned that Oasis refer to The Beatles quite often. Because of the lyrics, this song is usually considered to be a love song. Acoustic guitar is the lead instrument of the song, although it is joined by drums and cello sounds, produced on mellotron.

According to Noel, ‘Sunday Morning Call’ is about a ‘special person; a wonderful human being that lives life but can’t handle setbacks.’ Noel also has said that this song, together with ‘Where Did It All Go Wrong,’ describes real people who appear at his front door with booze and drugs early in the morning and just can’t get rid of bad habits. He admitted that those songs might actually be a subconscious message to himself. From the musical point of view, ‘Sunday Morning Call’ is a bit different from the usual Oasis style, as vocals and synthesizers take the lead place from the guitar.

During the long intro to ‘The Masterplan’ guitars are accompanied with violin sounds. The whole orchestra enters the chorus as the vocals reache their peak. Noel has described ‘The Masterplan’ as a song ‘about people’s fear of growing old.’ The message in the chorus states that there is no master plan for your life and you are the only person who knows whether to do something or not, while the verses describe people’s journey through life. However, Noel was inspired by a long corridor with plenty of doors in one of the hotels during the band’s tour in Japan.

The Shock of the Lightning

‘The Shock of the Lightning’ is the song from the final Oasis album Dig Out Your Soul. In an interview, Noel said that this propulsive rock tune was written and recorded extremely quickly. It is actually the demo, which was used as a finished song. ‘The Shock of the Lightning’ seems to retain the driving energy of its fast production. The style of the song differs a lot from all previous Oasis works, but the band’s unique musical features can surely be noticed. Despite a bit of pop-electronic sound overall, the brutal guitar raunch and grungy drums are still there.