10 Things You Didn't Know About the Bayeux Tapestry 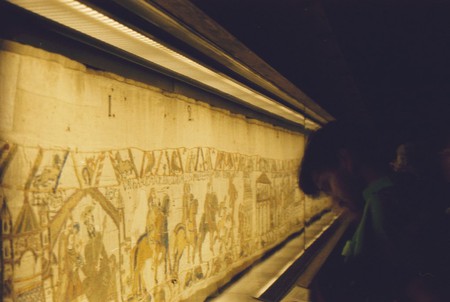 On January 18, President Macron announced that France would be lending The Bayeux Tapestry to Britain. Depicting 11th-century events during, and leading up to, the Norman Conquest of England and the Battle of Hastings, here are 10 things you probably didn’t know about its origins…

It was commissioned by Bishop Odo of Bayeux sometime before 1082

There isn’t an exact historical date it was believed to have been made, but what’s for certain is that it was commissioned by Bishop Odo of Bayeux at some point between 1077 and 1082.

It wasn’t made in Bayeux, France

It was actually made in Kent in England – not Bayeux in France. It’s only called The Bayeux Tapestry because of where it’s been kept for all this time.

They are not actually tapestries

Strictly speaking, The Bayeux Tapestry is actually a collection of hand-stitched embroideries, using woollen yarns on to a linen backcloth, rather than a tapestry.

Scene from the Bayeux Tapestry | © Myrabella/WikiCommons

Laid flat, it measures the length of three swimming pools

Proudly the longest embroidery in the world, The Bayeux Tapestry is only 20-inches tall but measures a mammoth 231-feet-long, about the length of three average-sized swimming pools.

The Bayeux Tapestry is in Latin, a prominent language during the Middle Ages

No English is featured on The Bayeux Tapestry as Latin was the language most used when it was commissioned. This is why some of the details are often a little sketchy…

What is for sure though, is that the first known depiction of Halley’s Comet appears on one of the pieces of the tapestry. The scene shows a group of messengers pointing out the comet, in comical fashion… 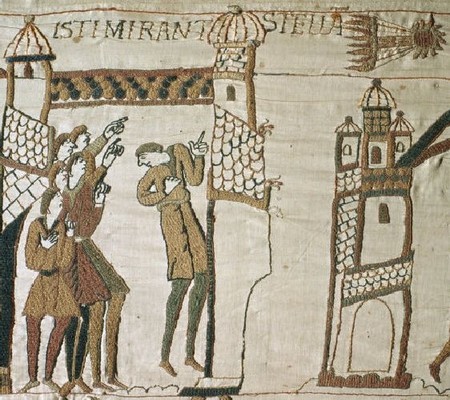 Parts of the tapestry were added much later on…

The arrow that allegedly hit King Harold in the eye was added to the tapestry much later down the line – in the 18th century, in fact – during restoration work.

This isn’t the first time Britain wanted to borrow the tapestry; they wanted to show it off during the Queen’s coronation in 1953 and were greeted with a big, fat ‘non!’.

There’s a British copy of the tapestry at Reading Museum

Loaned worldwide before becoming a permanent exhibition, there is a British copy of the tapestry at Reading Museum in Berkshire. It is almost the same apart from a blue border, which makes the tapestry slightly taller, featuring names of the 35 women who made the British copy. Male modesty has also been appreciated in the British copy, with underwear put on them!

Up until 2013 there was no conclusion to the tapestry, with the final stitches to the embroidery put in place more than 950 years after work commenced. Thanks to painstaking research and a few educated guesses, 416 Channel Islanders worked together to contribute at least one stitch to the tapestry, which depict the final scene of the Battle of Hastings and William’s coronation at Westminster Abbey in 1066 (below).

William's Coronation, 1066 – The Bayeux Tapestry | © Guernsey Donkey
Give us feedback