The Sights And Sounds Of Groningen In 48 Hours

Groningen — the little brother to Amsterdam — displays a rich past and prosperous future with its enchanting and historical sights. As Groningen continues to grow and an increasing number of visitors flock to the Dutch city, we reveled in spending 48 hours in the beating heart of the Netherlands. 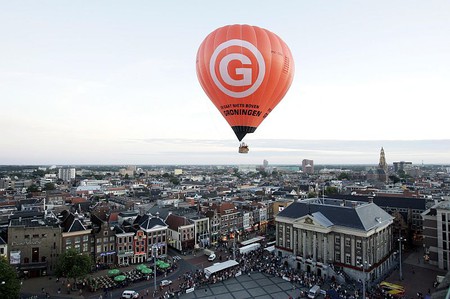 By winter 1944-45, the south of the Netherlands had already been liberated, but a winter of fear and terror started in the North. On March 1945, artist Hendrik Werkman was arrested in suspicion of creating illegal printed matter. Nearly a month later, ten prisoners were taken to a wooded area of the village Bakkeveen to be executed. Werkman was not among them; instead, he remained in Groningen. However, after one prisoner escaped on the journey to Bakkeveen, the transport returned. The next day a new group of prisoners (presumably the initial nine remained from the day before) including Hendrik Werkman were taken away. On April 10, 1945, he was shot. This became one of the last actions by the SP: three days later, the Canadians commenced the liberation of Groningen. Seventy years have passed since the liberation of Groningen, and the city has flourished to become a purveyor of prosperity, offering all residents a dose of the old and an awakening of the new.

There are many nostalgic landmarks to be visited by the public in remembrance of times gone by. The oldest guest house — dating back to the 12th century — in the city is still intact and open to visitors. As is the oldest clock in the city, which hangs in the Martinitoren church. There is, in fact, a law dating back to roughly 1730 that states anyone who is too big for their boots will be thrown out of the city covered in tar and feathers. Highly speaking, Groningen’s residents are charming, helpful and realistic. 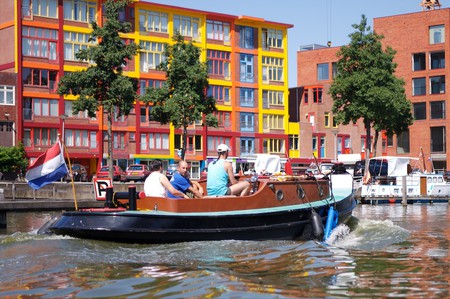 The city of Groningen is predominantly inhabited with students and holds the youngest population in the Netherlands. Boasting a large number of fascinating museums, galleries, theaters and parks, Groningen caters to all.

While visiting, it’s imperative to take a walking tour of the city; the intricate nooks should not be missed by foot, but be careful of the cyclist who dominate. ‘Kijk in ‘t Jat,‘ literally meaning ‘look into the street,’ is appropriate for Qude Kijk in t’ Jatsraat — a budding street of trendy coffee shops and quaint eateries. Make a pit stop for coffee at Black and Bloom where coffee making has become a refined art, or take matters into your own hands at Bij Britta where you can grind your coffee at the table. 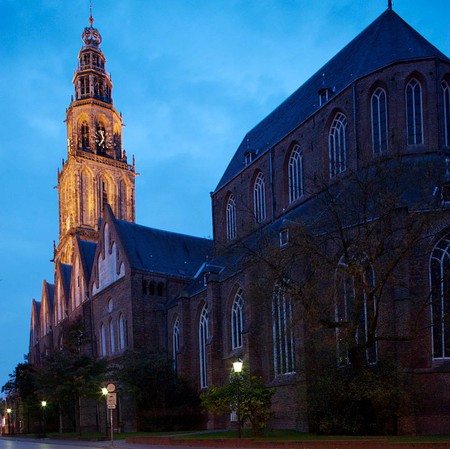 Before your evening meal, enjoy the jaw dropping view from the Martinitoren by night. Built 500 years ago and standing tall at nearly 100 meters, it is one of the oldest and tallest towers in Europe. Martinitoren is the heart of Groningen, and the city is built around the tower. Initially used to keep a watchful eye on enemies, the Martinitoren has become a popular tourist attraction. As you walk through Groningen, the chiming tower bells ring across the city, providing an extra positive feel to passersby. Work up an appetite by climbing the tower’s 368 steps to see the steeple’s wonderful 62 bells.

Forget traveling to far off countries to explore the wilderness when Groningen’s countryside is only a few hours away by car. Lauwersmeer National Park is for all nature enthusiasts, and it doesn’t stop there. Close behind Lauwersmeer is the Wadden Sea, a UNESCO World Heritage site, while a 40-minute boat trip to Schiermoonikoog National Park will find you in equal surrounding beauty. Enjoy all three outdoor sites by taking an excursion of the areas. Alternatively, have fun on the water by rowing, sailing or surfing. 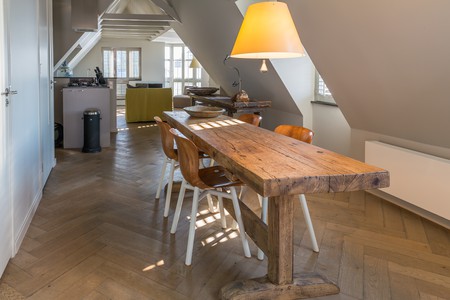 London Southend Airport is the only airport in the UK that flies to Groningen Airport Eelde. With Flybe’s prices starting at £29.99 per person, the journey is literally a hop, skip and jump over the North sea. Southend Airport is a blissful experience compared to the manic pace of Heathrow and Gatwick. On arrival at Airport Eelde, you can easily access a taxi to the heart of Groningen in 15 minutes.

Miss Blanche Suites and Apartments is a home away from home type of accommodation by the characteristic canal of Hoge der A and Brugstraat. The 12 luxurious suites are converted inside a monumental building from the early 20th century, while the seven apartments are situated in two newly constructed buildings next to the reception. The tasteful apartments are ideal for long-stay residents who perhaps do business in the city. Likewise, the extraordinary facilities make any stay comfortable and accessible while holidaying in the center of town. 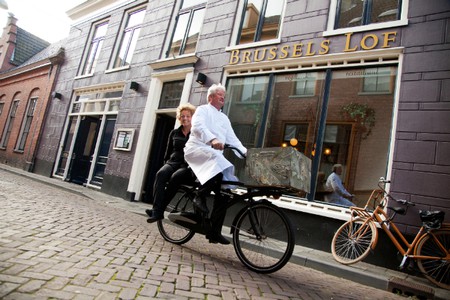 Breakfast is best enjoyed at the minimalist yet distinctive Bakkerij Blanche, a stone’s throw from Miss Blanche Suites. With every coffee, they serve stroopwafel — it is Dutch tradition to steep the waffle over your cup of coffee to allow the aroma from the caramel inside to melt. The Dutch do not overload you with large mugs of caffeine yet believe it should be served and drank in its most natural form — no added milk or sugar.

Restaurant Voila is perfect for wine connoisseurs. They have a wonderful ability to match their food dishes to a wide range of delectable wines and have a vast selection of bottles for ‘small and big wallets.’ Their five-course dining experience changes daily and reflects the essence of French cuisine. Restaurant Viola’s intricate setting is perfect for a romantic evening or for those visiting Groningen for the first time and wishing to splurge.

Dinner at Brussels Lof in the winding streets of the Ellebogen district is free from fuss with its laid-back approach. Chef Martin Jaring’s kitchen has been a renowned establishment for years in Groningen and only continues to prosper. Sustainability and the use of local ingredients are at the forefront of Brussels Lof’s cooking, yet Jaring’s does not get caught in trends or categorize his restaurant as ‘sustainable.’ Whether you opt for one of their North Sea fish dishes or vegetarian plates, Brussels Lof guarantees a mouthwatering meal.

Danielle is the Art Editor for the London Hub of The Culture Trip. She has a fascination with living a life full of creativity. Theatrical soul. Cinematic admirer. Champion frolicker. Avid foodie. Sunset enthusiast.