The Most Cycle-Friendly Cities in the World 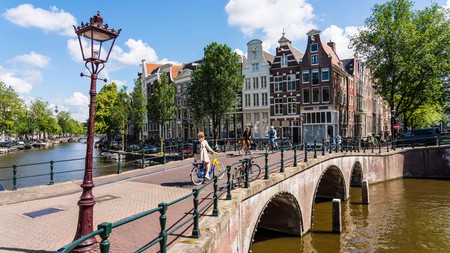 The need for a greener future has never felt more pressing than now. Over the last few years, cities around the world have been embracing sustainability and more ecofriendly ways of living. With cycling firmly establishing itself as one of the greenest modes of transport, we’ve rounded up the most cycle-friendly cities in the world to help you travel more responsibly while having some fun along the way.

Between Utrecht’s massive bicycle parking space and Paris’s “plan vélo” scheme, large cities are making positive strides when it comes to their cycling policies. If you choose to visit them, you’ll be greeted with wide cycle paths, low-speed streets and scenic bike routes that unveil pretty landscapes and historical treasures. Browse through our list of the most cycle-friendly cities in the world and start planning your two-wheel adventure.

Utrecht is one of the most cycle-friendly cities in the world – if not the most cycle-friendly one, according to Bicycle Cities Index 2019. It comes as no surprise if you set eyes on Stationsplein Utrecht – boasting 12,500 parking places, this three-storey bicycle parking is the largest in the world. It was designed by Ector Hoogstad Architects in 2019, hoping to encourage locals to commute using their bikes and public transport instead of their cars and, in turn, ease congestion in Utrecht. The city already takes pride in world-class cycling infrastructure, high bicycle modal shares and convenient intermodality, with politicians looking to establish cycling as the main mode of transportation, doubling bicycle commuting traffic by 2030. 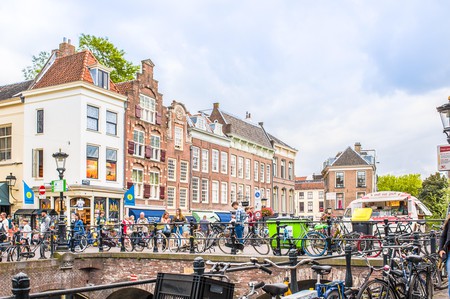 The Dutch capital literally brims with bicycles: there are almost 900,000 of them – which means there are more bikes than people – cycling along 400km (249mi) of wide cycle paths. These are mostly flat and easy to navigate. Amsterdam is practically bike heaven. Over 50 percent of all city journeys are made on a bike, while there are low-speed cycle streets and dedicated bicycle parking spaces which the city is planning to improve, along with the entire bicycle infrastructure, by 2022. Locals use their bikes for everything – from doing grocery shopping to going to work – while tourists can also rent a bike to move around. You can even browse through available city guidebooks that help newcomers bike safely. 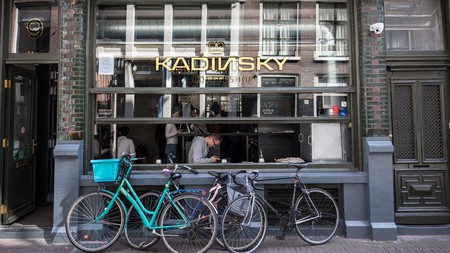 There are around 675,000 bicycles and just 120,000 cars in Copenhagen, meaning bikes outnumber cars by more than five-to-one. Almost one third of all journeys across the city are done by bike, with Copenhageners cycling an estimated 1.44 million km (894,775mi) every day. It certainly helps that there are 390km (242mi) of bike lanes and hundreds of kilometres of regional highways for bikers to use, with new bicycle bridges and regional cycle highways constantly under construction. The crown jewel of this giant network of cycle paths is Cycle Superhighway, which connects Copenhagen to the town of Albertslund, joining over 25 municipalities. Cycling amenities along the way, such as air pumps and timed traffic lights, ensure safe and easy bike journeys. 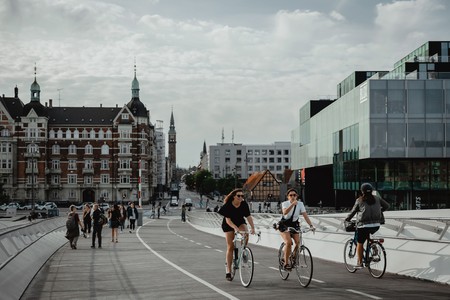 Intersection improvements, traffic light management and the city’s continuing efforts to lower speed limits have established Antwerp’s reputation as one of the most bike-friendly cities in Europe. The Belgian city has expanded bicycle parking at train stations and is looking to further expand its network of cycle highways. There are dedicated bike lanes and bike-sharing programmes, while it’s worth noting that Antwerp’s bicycle modal share rose from 29 percent to 33 percent from 2014 to 2018. A number of car-free routes outside the city also pass by marvellous landscapes and sights, such as rivers, castles surrounded by lakes and historic cathedrals. 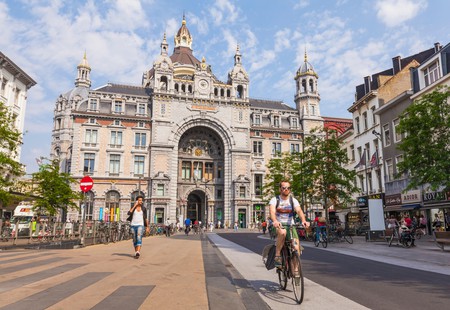 Home to Le Tour de France, the world’s most famous bike race, France is justifiably among the countries that encourage cycling. With almost 560km (348mi) of designated cycling paths and over 360 streets with two-way lanes for bikes, Strasbourg is by far the country’s most bikeable city. There’s a number of car-free sections, as well as an 85km (53mi) cycle path that runs around Strasbourg – the so-called Forts Trail follows the ring of the fortifications built after the Franco-Prussian War of 1870. Night bike tours and guided bike tours of the city’s forests are also available. 8 percent of the population currently rides a bicycle, but Strasbourg aims to increase that number to around 20 percent by 2025. 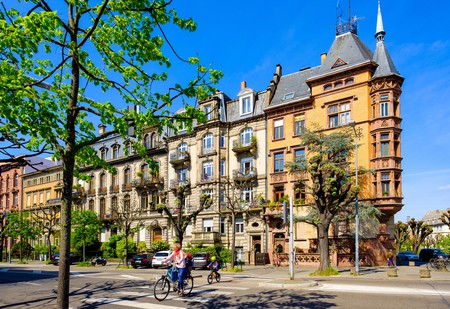 A few years back, the Parisian capital would be the last one you would expect to see on this list, given it was mostly filled with cars. Paris is still among the most congested cities in Europe, yet ever since it introduced its Vélib bike-sharing program – the largest in the world outside of China – in 2007, more and more bikeways have been popping up. Mayor Anne Hidalgo’s “plan vélo” was also launched in 2015, aiming to reduce pollution by taking cars off the streets and eventually make the city 100 percent bicycle-friendly. As part of the plan, there are currently 200km (124mi) of cycle routes divided into eight lines that cross 65 municipalities. Plus, a number of organised bike tours promise to show you around the city – the cycle tour of the gardens of Versailles is a must. 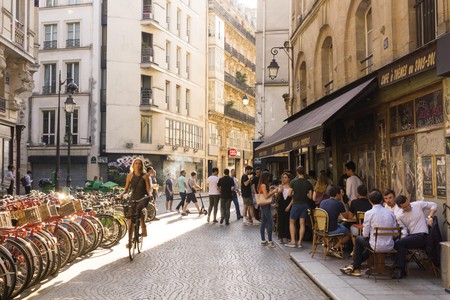 Enjoy tasty croissants for breakfast, then work it off by cycling around Paris | © Soma / Alamy

European cities are usually the ones taking up the highest positions when it comes to bike-friendly lists, but Montreal seems to be the exception to that rule. This Canadian city, which has its very own annual bike festival, broke ground back in 2017 when Mayor Valérie Plante won the elections by promising people new public transport investment and better bicycle infrastructure, eventually putting forward the boldest bicycle-focused project in the history of Montreal. When complete, the Réseau Express Vélo will include 184km (114mi) of protected one-way cycle tracks running across the entire island of Montreal, which will be linked to some of the existing bike paths, currently covering around 600km (373mi). This will also help to better define the spaces dedicated to each mode of transportation. 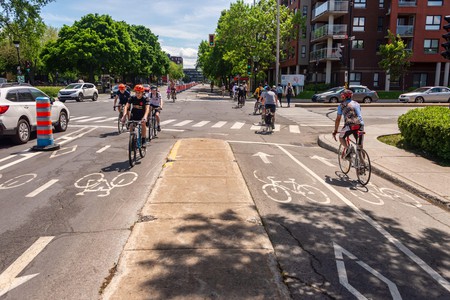 While Tokyo lacks the infrastructure of “cycling city pros” like Copenhagen, there’s no doubt that the Japanese capital has been making the most of its existing cycling network. About 14 percent of commuters in Tokyo ride bikes, which may not sound that impressive, but it actually is if you consider the size of the city – this percentage equals millions of citizens who use their Mamachari utility bikes every day to carry goods or even their children to schools and train stations. There are plenty of cycle paths, parking spaces and bike-sharing programmes in place. However, in the city centre, some cycle lanes share the same space as pedestrian footpaths, which can be tricky for bikers. Just outside of Tokyo, the countryside is marked by beautiful mountains, parks and lakes which you can also explore by bike. 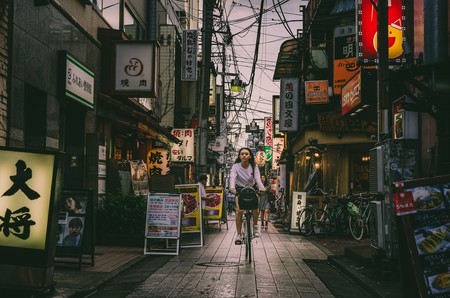 The 2015 Volksentscheid Fahrrad referendum introduced the idea of a more cycle-friendly Berlin, through a traffic turnaround and the creation of a law that promotes cycling. And so, the Berlin House of Representatives passed the Berlin Mobility Act in 2018, committing to an updated bicycle plan. Even though this hasn’t been fully incorporated into everyday life yet, the city already has 900km (559mi) of designated, wide cycling paths, as well as mostly flat terrain which makes cycling easier. Around 10 percent of the population uses bikes every day, amounting to one of the highest rates of bicycle commuting in the world. Tourists may also choose from a number of available cycling tours to see the city’s highlights. 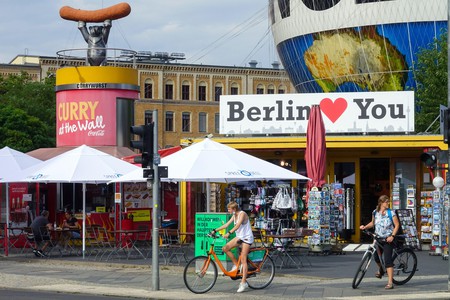 Over the last decade, the Catalonia capital has been expanding its cycling network, while trying to create the necessary space needed for each of its available modes of transportation. It’s all part of the city’s ever-growing Urban Mobility Plan – Barcelona’s bike-sharing scheme, Bicing, is one of the largest and most used in the world, while inner-city speed limits have been put in place to slow car traffic. Most of the city’s landmarks – from Sagrada Familia to Casa Batlló – can be accessed by bike, and there are plenty of lovely cycling routes to follow that pass right by the water. 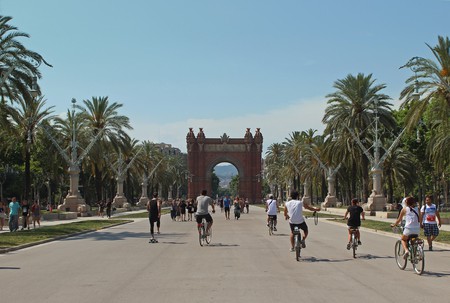