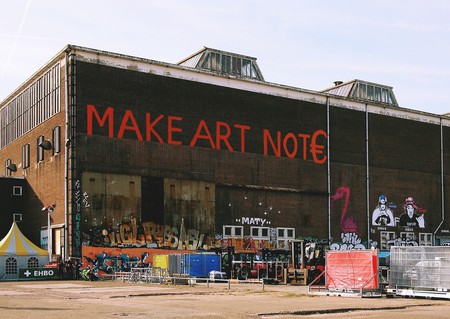 Amsterdam has remained an important hub for street artists since at least the 1970s and over the past few decades graffiti has become an important part of the city’s urban landscape. While many artists continue to tag buildings illegally, often in order to create provocative or socially conscious artwork, there are also many examples of commissioned street art in Amsterdam, including murals by Piet Parra, the London Police and R.U.A.

To get acquainted with the city’s diverse street art scene, it is definitely worth joining a guided tour while in Amsterdam. For instance, there’s Amsterdam Street Mural Tour, which mainly centres around larger, urban artwork located in Amsterdam-Zuidoost — a bustling neighbourhood that lies around 10 kilometres away from the city’s historic centre. The tour caters to small groups and trails through Zuidoost’s H-Buurt district, which features 14 lofty murals that were painted onto the sides of high-rise buildings by artists working with R.U.A. An experienced, local host leads this 2.5 hour excursion and explains H-Buurt’s history, culture and graffiti scene to participants throughout the tour’s duration.

Looking for something more central? Then make sure to check out Street Art & Alternative Tours which begins near Spui, then continues around the inner city. As its name suggests, the tour focuses on Amsterdam’s underground subcultures and stops at several points of interest that are associated with the city’s squatting movement, cannabis culture and street art scene. As the tour trails past many of Amsterdam’s most enduring, alternative hangouts, it lets visitors quickly familiarise themselves with the city’s less-well-known sights and cultural hotspots. 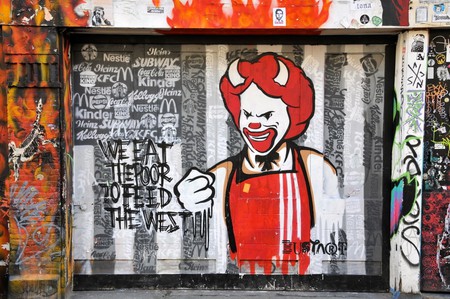 Anyone that’s acquainted with Europe’s street art scene may start to notice familiar tags after spending some time strolling or cycling around Amsterdam. For example, local legend Laser 3.14 tags thought-provoking messages on buildings throughout the city and mainly canvases temporary constructions such as boarded up windows or scaffolding — which means that his work usually disappears soon after it is completed. 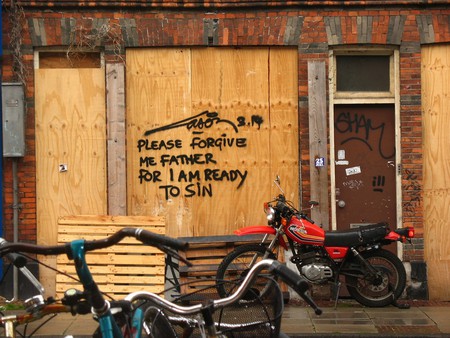 Even though the character hails from Utrecht, there are many examples of the Utrechtse Kabouter in Amsterdam. This bearded, cartoon gnome wears a red-pointed hat and often appears in areas that feature large concentrations of graffiti. 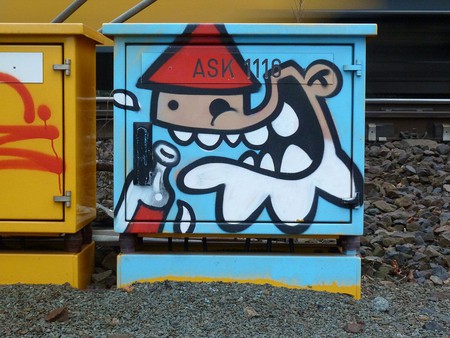 French street art luminary Invader has also mounted dozens of his signature pixellated mosaics in Amsterdam – many of which are labelled on this handy map. 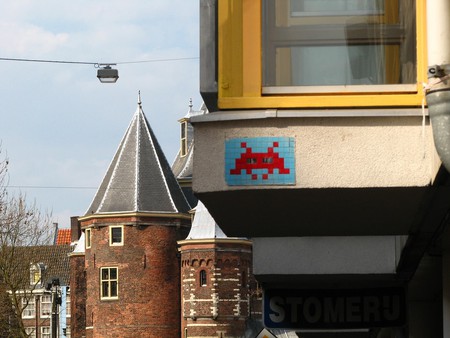 There are several areas in the city that are famed for their street art. In the north there’s NDSM-Werf, an enormous, industrial shipyard that has been converted into an artistic and cultural hotbed, complete with ateliers, venues and restaurants.

Even though it is currently experiencing rapid changes, Spuistraat still features many urban artworks that reflect the area’s deep ties with Amsterdam’s squatting community. De Jordaan is also renowned for its small and large-scale street art including a building-spanning piece from Piet Parra on Tuinstraat and another, giant mural created the London Police on Prinsengracht. 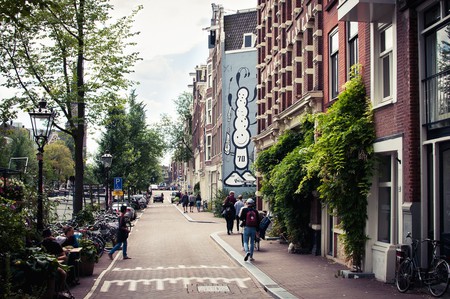 London Police mural on Prinsengracht | © www.mr-amsterdam.com / Flickr
Give us feedback