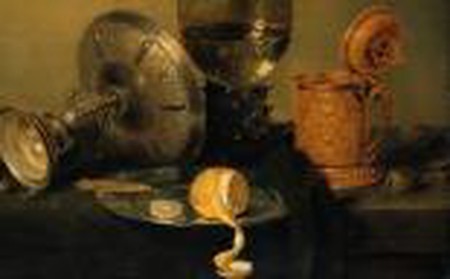 Culture Trip analyses the work of the Dutch painter Willem Claeszoon Heda, whose art can be admired in Rijksmuseum in Amsterdam, the Netherlands, and in the National Gallery in London. 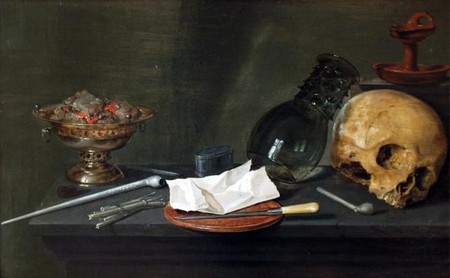 The Dutch artist Willem Claeszoon Heda (c. 1594 – 1680), usually shortened to Willem Claesz. Heda, lived in Haarlem in the Netherlands all his life. While there is not a lot of information in existence about Heda, it is understood that he joined the St. Luke’s Guild in 1631 and held a number of positions. Having painted a number of figure studies earlier in his career, he focused exclusively on still life later on. His ability in rendering reflections was and is considered masterful. As was the case in his time, Heda used oil paints and a panel with which to articulate his ideas. A typical material for such panels would have been some type of wood.
Heda was a master of monochrome still lives, a popular style in the 1630s as well as in other, surrounding decades. These are paintings that are limited in the colours used. Monochrome actually stems from the Greek word ‘monochromos’ meaning ‘of one colour’. Heda would often use the same objects in multiple still lives. This method would of course result in practising techniques more thoroughly as opposed to always changing items for diversity and varied practice. With this, he became particularly proficient at painting silver and tin. These objects offer excellent practice in portraying reflections.
Artists such as Floris van Dyck (c. 1575 – 1651) and Pieter Claesz (1597/8 – 1660) tended to use brighter colours in their still lives than Heda did. With around 70 works to his name, Heda was one of the most famous still life artists of his time. 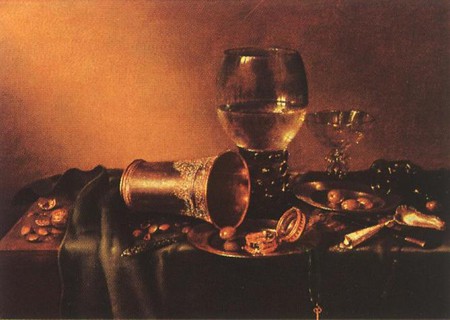 One of Heda’s still life paintings, simply entitled Still Life, features a selection of what we might class nowadays as periodic antiques. In a dull light on an old wooden table, there are a couple of what appear to be metal plates with olives, grapes or nuts on the far plate, and a lemon and a knife on the near plate. The lemon has been partially pealed and cut once, with the slice lying to the left of the remainder of the original lemon. The fruit has been pealed delicately to have the skin twirled and hanging off the edge of the plate in the foreground. The bright yellow of the lemon contrasts with the monochrome colouring of the rest of the picture and brings the lemon forward, thus helping to create a sense of space in the image.
The plates are sitting on a cloth which is dark with a green tint making it a shade of grey, and folded just on the left side of the golden-orange cup. This fold allows the viewer to see the table which is no doubt the intent. There are two nuts placed on the right of the table. They are partially cracked with one in the foreground and the other in the background. There are also two nuts of a different variety on the left, also cracked for added detail, the shells remaining alongside the nuts.
The most prominent items in the painting are the silver cup, glass cup, and golden-orange cup. They are positioned in that order from left to right. Along with the plates, they illustrate differing reflections as the light hits them. The masterful achievement of depicting the light in objects only comes from a desire to practise, inspired by an innate fascination with the myriad of reflections from light hitting very shiny, light absorbent objects. When one does not merely look at an object, but rather observes it, looking into it, one finds details that have the effect of bringing an essence to a painting that is otherwise missing. 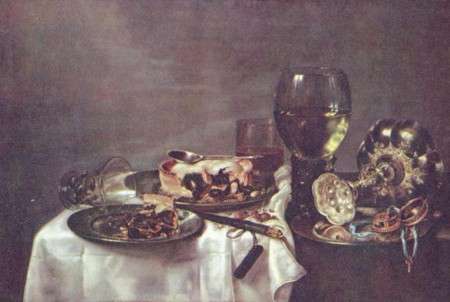 The liquid in the glass cup brings yet more flavour to the composition, with its refraction and the depth in which one can see into it. Both the silver and golden-orange cups are highly intricate, yet the detail has been quite simply portrayed by the use of light and dark. Even the texture of the objects has been brought to life, from the rough lemon skin to the soft cloth and the shiny, smooth metal plates. The basic, dim, either sun-lit or candle-lit background accentuates the foreground by not stealing focus. It also provides the appropriate lighting for the mostly monochrome set up.

The only slight criticisms of the painting are that the bulk of the lemon where its skin continues to protect it appears mildly flat, as does the lid of the golden-orange cup. The lemon seems this way because the covering skin is mostly absent of shadow or a light and dark contrast, resulting in a slightly two dimensional appearance. The pealed skin and circular cut where the inside of the fruit can be seen help to counter the issue of flatness.

The lid of the golden-orange cup looks flat on its top because of the lack of light hitting it. Although it only appears fractionally flat and not so much that the cup does not give the feeling that it can be picked up out of the picture and used. It is imperative that this idea of being able to touch the items through the page is achieved for the piece to look more than real.

The other discrepancy is with the folded cloth where, while it has been so delicately painted to look like cloth rather than some solid object, perhaps it is the thickness of the cloth that makes the curvature around the golden-orange cup appear to be slightly unrealistic. It feels as though it should be resting on the cup, but instead it is sitting upright and quite stiff. Now this was of course how the objects had been laid out. And it is not to say that it does not look masterful. However, an unnaturally looking cloth, regardless of reality, does not do the composition great justice. 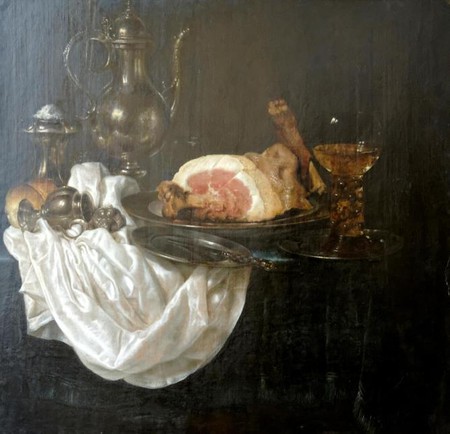 Compared with another of Heda’s works completed a year later in 1635 called Still Life with Gilt Cup, the later piece exhibits not a single flaw. While a year can make a vast difference in terms of one’s achievements, Heda’s skill is evidently no different between 1634 and 1635 since he used some of the same objects in both of the paintings in question. However, within reusing the same items in a similar way to the earlier painting, Heda has succeeded in making the lemon appear three dimensional by his use of light and shadow. He has made the lid of the metal container seem rounded with his use of subtle reflections and light and dark. Furthermore, the cloth looks completely natural and real. The sense of reality with a cloth is amplified by the complexity of the layout. However, a complex layout is achieved quite simply by dropping the cloth naturally on the surface. This automatically creates an artistic composition, which is more complex. The detail in this later painting even goes as far as to have the artist’s signature on the cloth as though it was embroidered on. It cannot be determined as to if it actually was or not. However, it is likely that Heda made the addition himself.
These particular paintings by Willem Heda can be viewed at Rijksmuseum in Amsterdam, the Netherlands. There are works of his in numerous other museums, one of which is the National Gallery in London. While one can see Heda’s work online, there is nothing quite like viewing the original artwork of an ancient master up close. There were many artists painting in either a similar style or painting still life compositions during the period. A couple of them were mentioned in this article, and their work, along with all of the other artists’ work, can be found online and witnessed at various museums, including those noted.