Take the scenic route to Rotterdam, Utrecht and Amsterdam and experience the best of Dutch culture. Getting there has never been easier thanks to Stena Line, whose ferries can take you, your car and your bicycles from Harwich to the Hook of Holland. Here’s our guide on what to see on your journey to three of the Netherlands’ most popular cities.

Rest during the journey from Harwich to the Hook of Holland in one of the super-comfy cabins and enjoy a meal, blockbuster movie or shopping experience on board. Bringing your bicycle is super easy and best of all, Stena Line ferries are pet-friendly, so everyone can come along!

Hook of Holland to Amsterdam

Visit Holland’s most famous seaside resort with a tour of the sculpture park on Scheveningen boulevard, zip line down the famous pier, and check out the seafood restaurants and cosy cafés in the harbour.

Visit the Fire Engine Museum, the Louwman Museum (featuring over 230 classic vehicles), and the parks, walking trails and hunting lodges of the royal estates.

Check out the oldest university in the Netherlands, the Leiden Botanical Garden (founded in 1590 and the first garden in Western Europe to grow tulips) and climb a windmill dating from 1743 at Museum De Valk. 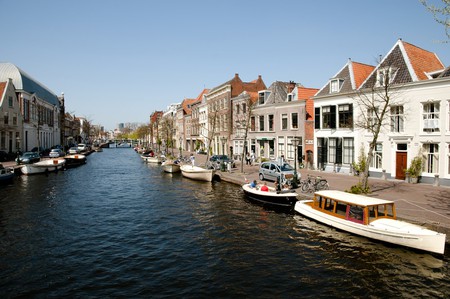 Take a dip in the subtropic adventure pool Aquamar; have a go at a host of water sports, including beach volleyball, kite surfing and kayaking; or cycle part of the Limes Route alongside ancient Roman ruins.

No visit to the Netherlands would be complete without seeing the world famous Keukenhof Gardens. For eight weeks during spring, the gardens are a sea of colour and fragrance with more than seven million tulips, daffodils and hyacinths in bloom! 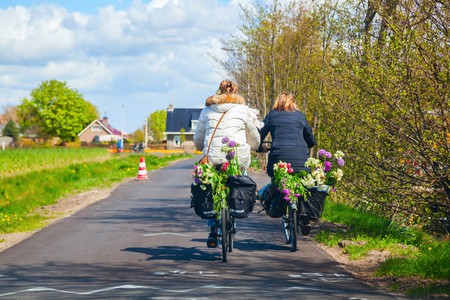 Aalsmeeer is located 13 km southwest of Amsterdam. The town is sometimes referred to as the ‘Flower Capital of the World’, as it hosts the largest flower auction of its kind. Aalsmeer is also home to numerous nurseries and an experimental stations for floriculture.

Explore the decades-old fortifications surrounding Amsterdam. The ‘firing line’ cycling route follows the Vuurlijn, taking you along the fort near Kudelstaart, the Drect, Uithoorn and De Kwakel.

Haarlem is consistently voted the best shopping destination in Netherlands. Grote Houtstraat, Barteljorisstraat and Zijlstraat are among the streets with the best boutiques. 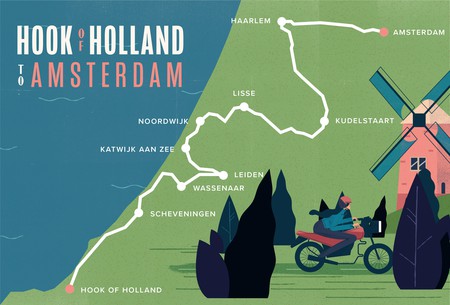 Hook of Holland to Rotterdam

Visit the Museum Vlaardingen, which tells the story of 5,000 years of life in the delta of the rivers Rhine and Maas from the prehistoric Krabbeplasman to the modern day. Take a detour through the Oude Maas distributary and check out Ruigeplaatbos city park. After a storm destroyed the area 20 years ago, it was decided to leave the park untouched and allow nature to revive itself. Highland cattle were introduced in 2000 and have grazed the parklands since.

Visit the Stedelijk Museum Schiedam for contemporary art, the windmill museum at De Nieuwe Palmboom for a recreation of an original working windmill, and learn about the history of Dutch gin at the National Geneva Museum Schiedam, where you can also enjoy a tasting!

The northern borough of Rotterdam has plenty to explore, including Rotterdam Zoo (one of the Netherlands’ oldest) and home to big cats, rhino and more; Miniworld Rotterdam, an amazingly detailed miniature recreation of the Dutch city; and the Oude Noorden area with its cool independent cafés, restaurants and boutiques. 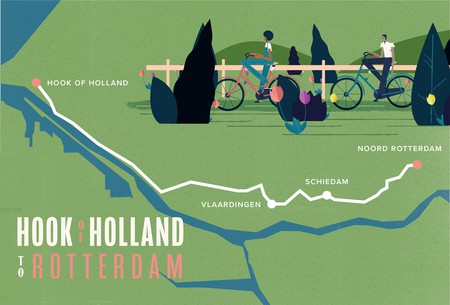 Hook of Holland to Utrecht

Head to the Delft Market Square and visit the Oude Kerk with its 75-metre leaning bell tower and the Nieuwe Kerk with its crypt dedicated to royal tombs. Check out the Vermeer Centre featuring works from the Dutch master Johannes Vermeer (Girl With a Pearl Earring, The Milkmaid) and the Museum Het Prinsenhof, once the court of William of Orange, ‘father’ of the Dutch nation.

Indulge your inner child in Zoetermeer at the Nationaal Videogame Museum featuring classic arcade games and the latest online fun. Try an escape room, one of Europe’s fastest growing group activities, at WeEscape, and head to the Balijbos landscaped forests and Buytenpark where you can explore over 40 hectares of grasslands and waterways. 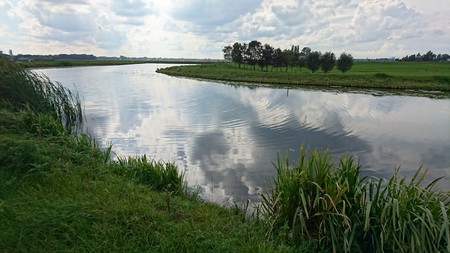 Ride the peaceful riverside trails along the Rotte and Oude Rijn, which once formed the northern border of the Roman empire. Head to the indoor trampoline playground at Jumpsquare (also in Amsterdam) and check out the Boomkwekerijmuseum, which has a permanent exhibition telling the story of early Dutch life.

The Foundation Kassmuseum Bodegraven museum has preserved old tools and materials used on Dutch farms throughout history for cheese production and encourages research into the history of cheese-making. Take a ride past Watertoren, one the most historic water towers in the Netherlands.

Surrounded by rural countryside, Woerden is home to the Kaaspakhuis, a modern cheese warehouse and farmers’ market and host of one of the Netherlands’ biggest cow shows. Also check out the City Museum, which has featured exhibitions of cheese in still life (the Dutch really like cheese) and go see Roman artefacts from an excavated fort, stopping at one of the nearby restaurants for lunch or dinner. 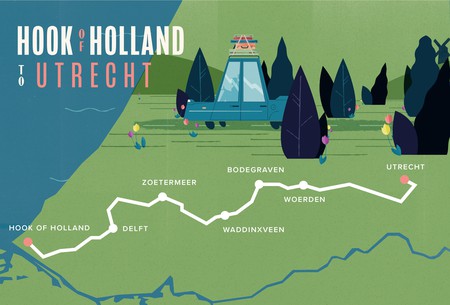 Reaching the Netherlands with your car, motorbike or bicycle has never been easier thanks to Stena Line, who cross from Harwich to the Hook of Holland throughout the day and overnight. Visit www.stenaline.co.uk for more information or click here for special deals.