Football Away Days: What To Do In Rotterdam 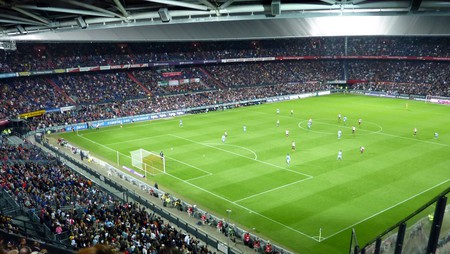 You’re off to Rotterdam! While you’d love to take in the Erasmus University and maritime heritage, you’ve only got time for some food, a few beers and a quick look around before your team plays Feyenoord later on. Perfect, everything you need is here.

Stadion Feijenoord is more commonly known by its nickname, De Kuip (The Tub). Although it drew crowds of nearly 70,000 in the late 1940s, redevelopment means the capacity has been reduced, but is still a very healthy 51,000.

VESSEL 11 – A gastropub on an old mobile lighthouse? Sure. A Dutch take on a British menu with local, seasonal ingredients? Sounds lovely. A wide selection of quality beers? What’s not to like?! Once you get used to eating on a boat (the owners live on it by the way) you’ll find fewer nicer spots to eat in Rotterdam. If you have the time you can even book the ‘HotTug’ – the world’s first wood-fired hot tub, where you can cruise in the river, sitting in steaming hot water, sipping a beer. Whether you’re in the HotTug or not, don’t be afraid to opt for their home brewed ‘V11 Skunky’ red ale.

Brewery, Shop
Facebook
Email
Twitter
Pinterest
Copy link
Share
Map View
KAAPSE BROUWERS – Part of the Fenix Food Factory (another good spot for food as it goes) – Kaapse Brouwers, or ‘Cape Brewers,’ is the youngest city brewery in Rotterdam. You can go for the tour, visit their shop or simply head to the bar – whichever way you choose you’ll end up drinking some of the Netherlands’ finest. There are seven regulars, including their Black Rye IPA, Imperial Red Ale and Oatmeal Stout, but there are also some more experimental goings on which are always worth a try. The venue itself is a wooden structure inside a warehouse and you can take your beers outside to one of the benches on the quay. Se tem @Kaapsebrouwers no @eapsp? Claro, é só escolher a sua preferida! Qual é? #welovecraftbeer #kaapseforyou pic.twitter.com/4eP6QgUhUQ

STREET ART – Aside from the fantastic museums in the Netherlands, Rotterdam also features an impressive array of street art, with sculptures dotted about throughout the city. The International Sculpture Collection aim to raise awareness with a collection of art in the public space of Rotterdam, highlighting current developments in the city. There are over 60 structures placed around and to find out where each one is, simply head to the ISC’s map of the city. Eendrachtsstraat 10 3012 XL Rotterdam

BIKE & BITE – A condensed tour of the city, all done on two wheels and with stop offs for local food and drink along the way. There are a few different tours available, depending on the time you have and what you want to see. If pushed for time it’s a brilliant way to get your bearings of the city, while getting fantastic recommendations for places to eat . Pick from ‘Bike & Bite,’ ‘Off The Eaten Track’ and ‘Short & Sweet.’ De Graeffstraat 12A, 3039 XD Rotterdam, Netherlands