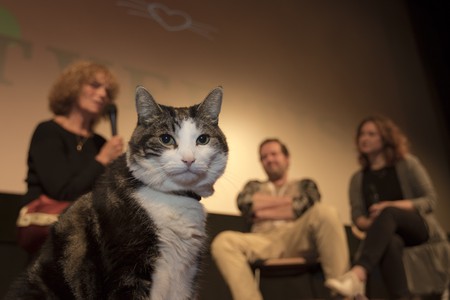 CineMeow is Europe’s first roaming cat movie event and takes place roughly every four months at different spots around the Netherlands. To learn more about the project, we spoke to one of CineMeow’s key contributors, Sacha Gertsik.

Gertsik has worked on every CineMeow to date, but eagerly affirms that she wasn’t its founder. ‘That was my partner-in-crime Alexander Zwart,’ she explains. ‘I was kind of sceptical at first and thought; “What are you going to do? Show the Aristocats [1970]?” And he told me; “If you join, yeah, we will.” Then I realised that I had to help out, as Aristocats is actually one of my favourite films of all time.’

After deciding to pool their talents, Zwart and Gertsik then launched the first edition of CineMeow at the EYE Film Institute in Amsterdam in October 2015. ‘We screened Roar [1981]. It’s a cult classic involving over 100 real-life lions. We had a photo booth that day, where people had to roar to have their picture taken, and everybody roared!’ 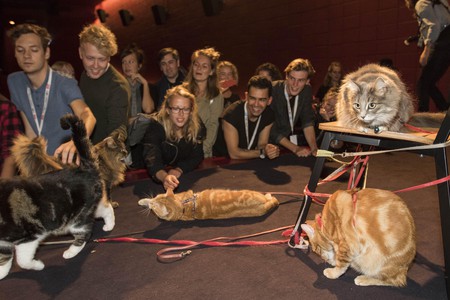 Since then, CineMeow has toured throughout the country and even earned a spot on the Netherlands Film Festival’s annual program. These events always feature additional performances or activities, such as talks or concerts. At two particularly memorable evenings, Gertsik and Zwart were joined onstage by five trained cats and their carer, Sabine van der Helm. As van der Helm ranks among the most respected animal trainers in the Netherlands, members of her adorable menagerie have appeared in many Dutch movies over the years, including Alex van Warmerdam’s crime thriller Schneider vs. Bax [2015].

According to Gertsik, CineMeow’s followers tend to fall into two overlapping demographics, namely film buffs and cat fanatics. ‘I think we have the loveliest crowd. The kind of people that go “Awwww” every time they see a cat on screen.’ Although it might seem like an incredibly niche-genre, cat-centric cinema is surprisingly common, and there are many blockbusters, cult movies and documentaries that fit into this category. In fact, CineMeow has already shown several Dutch features, such as director Dick Maas’ latest horror caper Prooi [2016] and Carice van Houten’s breakthrough film, Miss Minoes [2001].

CineMeow has also organised two nights of short movies. ‘I really loved the films on these programs’ Gertsik said. ‘Cats in Riga, for example, was amazing. The filmmakers create this snapshot of Riga’s current political climate by following a bunch of cats around the city. It’s really subtle, but you can sense that people in Riga are feeling nervous because of the Russian military, even though the film doesn’t really involve human characters at all.’

Almost every CineMeow has taken place at a different cinema around the Netherlands, and Gertsik considers this part of the appeal. ‘Every cinema has its own personality. It’s really nice to connect with these venues and get to know them behind-the-scenes.’ She expects CineMeow to continue touring around the country and expressed that she had some new locations in mind. ‘For example, there’s this place in Boxmeer called De Weijer. It’s a very special venue, run by a small team, and they do everything from music, to cinema, to theater. And they have great food, and they’re just lovely people. So, everything about the place is a win.’

Gertsik also revealed her most ambitious plans for CineMeow; ‘I dream of showing the Aristocrats, but that’s nearly impossible because it is in the Disney vault. They don’t give permission ever. So, maybe that’s a lifetime goal.’