A History Of Raw Herring As A Dutch Delicacy, In One Minute 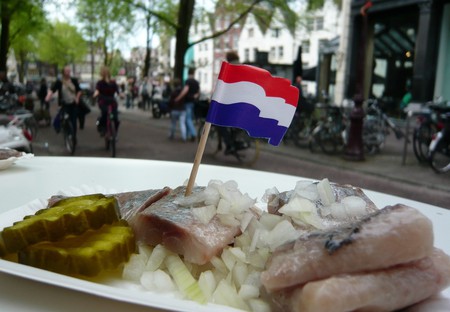 Needless to say, raw herring is an acquired taste and this silvery, slimy snack is definitely not for everyone. Nevertheless, it holds a special place in many Dutch people’s hearts and has been a staple dish of the Netherlands since the Middle Ages. This infamous fish can be bought throughout the country and in summer time herring season comes into full swing, with countless low-landers chowing down on this peculiarly Dutch delicacy.

Many northern European countries enjoy their own version of herring. In the UK kippers are traditionally served alongside eggs and black-pudding, acting as one of the pillars of the Great British breakfast. Whereas, in Germany the fish are tossed into a salad and rolled over sauerkraut or gherkins. Clearly, something about herring brings out national idiosyncrasies, and just like their neighbors, the Dutch are positively enthralled by the fish’s charms.

Historically a large part of the Dutch economy revolved around the fish trade and herring was a vital commodity. This little fish prefers to move in large schools around shallow coastlines making it an easy catch for fishermen. At some point in the Middle Ages the Dutch began to smoke and salt the fish, preserving it in large barrels that could be transported across Europe and eventually the New World. In the 14th century this process was improved with vinegar, and soon after herbs and spices were added to the mix, creating the variety of brine which is still used in the Netherlands today. 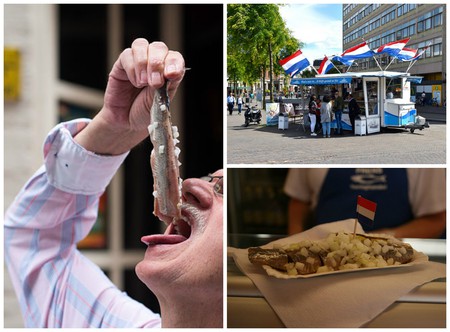 This brine is much sweeter than other European equivalents and gives the fish a distinctive zing. To even out its flavor the Dutch often pair herring with diced raw onions and gherkins, sprinkling these accompaniments over the fish’s scales. While herring can be eaten inside of a bread roll, this method will garner disapproving looks from locals. Indeed, the only true, Dutch way to eat herring is vertically; with certified Netherlanders dangling the fish above their mouths as they take generous bites from this pickled treat.

So, next time you’re in the Netherlands be sure to look out for kiosks or fishmongers advertising ‘Haring’ and be ready for a culinary adventure.