7 Beautiful Golf Courses in the Netherlands

Among the many golf courses spread around the Netherlands, there are several superb properties that deserve special consideration. These stunning clubs include three coastal links courses on the western side of the country, and four other inland properties that boast unique layouts.

Koninklijke Haagsche Golf Course & Country Club’s location on the western Dutch coast means that its natural layout shares many similarities with British or Irish links properties. The course was designed in the early 20th century and has changed several times over the years, while retaining its demanding geographical elements.

UGC de Pan was founded in the late 19th century and then renovated by Harry S. Colt in 1929. The course runs through a particularly green plot of land outside Utrecht that edges onto a series of rolling, densely wooded hills called de Veluwe. The course looks absolutely stunning and features many distinctive natural elements, including thick woodlands, sandy hills and small valleys covered in heather. It is also common to see wild deer roaming around its grounds.

Famed English golf course architect Harry S. Colt designed this property in Noord Brabant in the early 20th century and routed its holes through a thick row of woodland outside of Eindhoven. Aside from its trees and bushes, the course features several other hazards including streams and ponds. The club has hosted many important championships over the years and offers professional golfing lessons.

This historic Dutch golf course has been modified by several famous landscapers over the years, including Harry S. Colt and Sir Guy Campbell. Its winding, hilly terrain is perfect for seasoned golfers and the course has hosted the Dutch Open almost thirty times since opening in 1910. It’s located a few kilometres away from Hilversum in North Holland, which is easily accessible from Amsterdam via public transport or car. 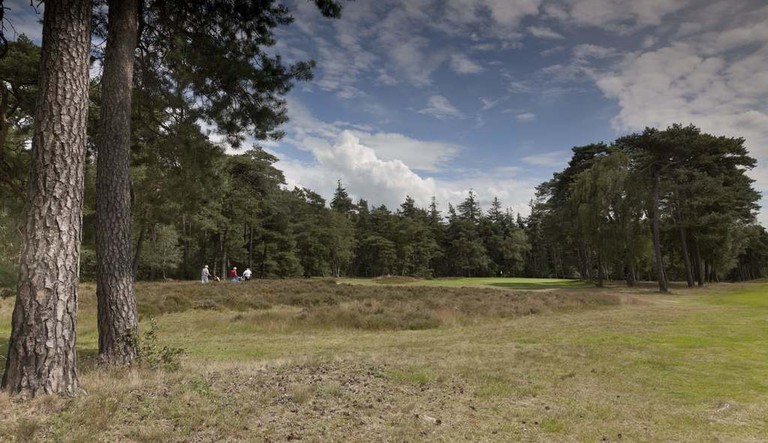 Like many other entries on this list, Noorwijkse Golfclub is located on the rugged western Dutch coastline, along a stretch of land defined by its undulating dunes. Noordwijkse is among the many links-style golf courses spread around this region and currently features eighteen holes that wind through its picturesque terrain.

This well-placed golf course lies just outside Amsterdam’s Schiphol Airport, which means international golfers can almost immediately tee off after landing in the Netherlands. The course was designed with championships in mind and trails through an uneven tract of land between Amsterdam and the Dutch coastline.