15 Reasons Winter Is the Perfect Time to Visit Amsterdam 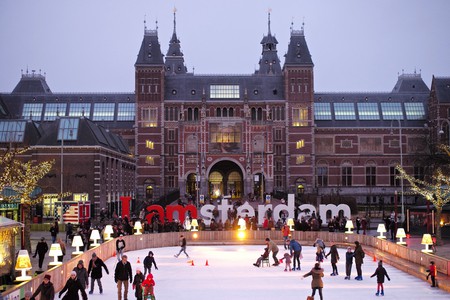 The ice rink outside the Rijksmuseum | © Roman Boed / Flickr

While there’s certainly never a wrong time to visit Amsterdam, exploring the city during winter always presents unique opportunities. In fact, there are dozen of wintry things happening in Amsterdam between December to February including every items on the following list.

Instead of putting their faith in Santa Claus or Father Christmas, Dutch children believe that a tall, lean, bearded man from Spain called Sinterklaas delivers presents on December 5th. The weeks before are marked by several events related to Sinterklaas, including his arrival by steamboat in Amsterdam on November 13th.

Every year from around the last week of November until the end of January Amsterdam hosts a citywide lights festival. Artists from all over the world present their illuminated artwork at this outdoor festival turning the city into an enormous open air exhibition. 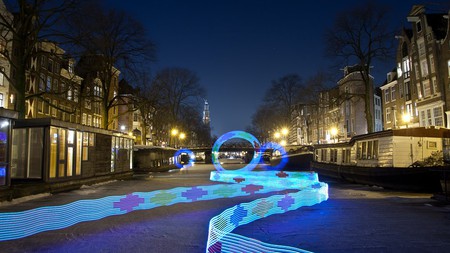 Ice skating on the canals

Although it doesn’t happen every year, sometimes the temperature in Amsterdam will drop low enough for the city’s canals to freeze over, turning these waterways into improvised ice rinks. While this might seem a little dangerous, the local government only allows people onto the ice after making sure that it is safe and closes off the canals in order to temporarily freeze certain manageable areas.

From the end of November until February several areas around Amsterdam are transformed into open-air ice rinks. The biggest temporary ice rink in the city runs parallel to the Rijksmuseum on Museumplein and looks directly onto the city’s iconic Iamsterdam letters.

The ice rink outside the Rijksmuseum | © Roman Boed / Flickr

Traditional festive food in the Netherlands is ridiculously delicious and includes many sweets, cakes and candies that are laced with spices that match perfectly with colder weather such as cinnamon, ginger or nutmeg. Basically every bakery and supermarket in Amsterdam stocks classic Dutch treats over winter including crunchy speculaas cookies, bags of pepernoten and loafs of almond filled kerststol.

During the colder months in Amsterdam, pubs, bars, and cafés throughout the city serve some of the most hearty, warming drinks imaginable. These festive concoctions include a traditional dark beer called bokbeir as well as a warm, spiced wine called glühwein that’s usually served with a cinnamon stick and slice of orange.

Over the festive season several public square around Amsterdam turn into Christmassy wonderlands and feature super cute outdoor markets. Basically everything associated with Sinterklaas and Christmas are sold at these markets including freshly baked cookies, flagons of glühwein and sugar coated oliebolen.

As people in the Netherlands tend to treat Sinterklaasavond on December 5th as the main gift-giving day of the festive season, Christmas is generally a more laid-back affair than in Anglophone countries. In fact, many restaurants in Amsterdam remain open during Christmas Day and organise special festive events.

Amsterdam is easily one of the best places in Europe to celebrate New Years Eve and always hosts hundreds of events during January 31st. Just make sure to watch out for stray fireworks as Amsterdammers tend to get a little over enthusiastic with impromptu pyrotechnics displays. 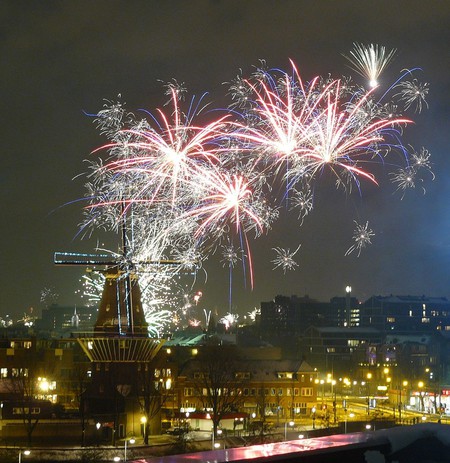 Over the past six years, National Tulip Day has taken place on Dam Square at the end of January to mark the beginning of the flower seasons in the Netherlands. Thousands of colorful tulips are planted on the square during this event and people are encouraged to pick their own bouquets for free

Mercedes-Benz FashionWeek takes place in Amsterdam twice a year during two long weekends in January and August. The convention always attracts groundbreaking designers and is among the most important fashion events in the entire Benelux region. 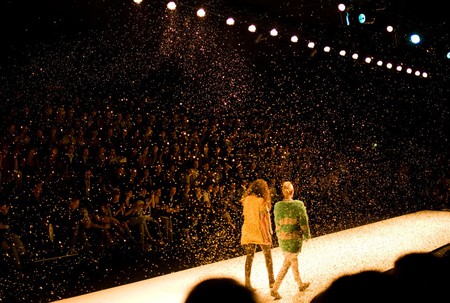 Amsterdam is easily one of the most romantic cities in the world, making it perfect for Valentine’s day getaways. While it is easy enough to find romantic spots in the city many clubs, restaurants, and other enterprise organise special events during Valentines Day that cater to couples and singles.

Generally speaking, there are considerably fewer holidaymakers in Amsterdam during the colder months of the year which means that everything is much quieter in the city. Nevertheless, there are still dozens of things going on around Amsterdam including concerts, new exhibitions and parties.

Chinese New Year in Amsterdam is always awesome and revolves around several outdoor events that mainly take place on Dam Square and Zeedijk. These festivities include fireworks displays, lively parades and street parties.

It is possible that Amsterdam might actually look even more stunning during winter and places like the canal belt or Vondelpark basically turn into real-life postcards.