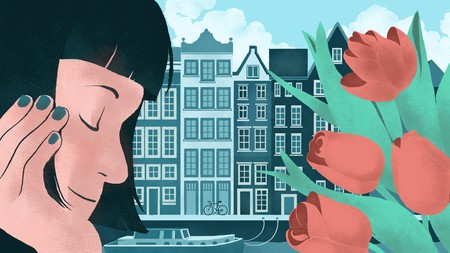 Even though most people in the Netherlands understand English, it doesn’t hurt to learn some local lingo before heading there on holiday. In fact, mastering a few basic Dutch words, like these phrases listed here, could make the world of difference to your trip, allowing you to understand important information without relying on English. Plus, Dutch speakers generally appreciate the effort.

Yes, it is that simple. If you know how to greet someone in English, you just need to alter your pronunciation slightly in order to master the Dutch version of ‘hello’. It is also common for Dutch speakers to say hi, hey or hoi when greeting each other, so feel free to rely on these shorter, more informal words in day-to-day life.

Dutch people aren’t usually sticklers for formality, but it’s still worth learning basic pleasantries before heading to the Netherlands. If you feel like a situation calls for more decorum, say dank u wel (dank oow vel) instead, as this phrase is slightly more polite.

As you may have already noticed, many basic Dutch words are very similar to their English counterparts. For instance, learning to say ‘yes’ and ‘no’ in Dutch won’t pose much of a challenge to English speakers, but will make it much easier to communicate while visiting the Netherlands.

Though it is slightly harder to pull off on your first try than other basic words or phrases, learning to say ‘please’ goes a long way in Dutch (or any language for that matter). This phrase literally translates into English as if you please.

While there are other ways to say goodbye, the most common word uttered when people are parting ways in the Netherlands is almost certainly doei. To add some extra affection to the whole experience, you can elongate the word’s second syllable, changing doy ee into doy eeeeeeeeeee.

There’s no need to fret if you don’t understand something in Dutch. Chances are whoever you’re talking to will revert to English after you’ve expressed that you haven’t caught their meaning.

Another easy one for English speakers. Although you’ll have to learn the words for what you’re searching for, many common nouns are similar in English and Dutch. For instance, het toilet means the toilet while het station translates to the station.

Hopefully you’ll never need to use these words of warning, but if you’re ever worried about somebody’s safety, let them know by saying kijk uit.

Remember to watch where you’re walking in the Netherlands, as many cycle paths look very similar to regular sidewalks. When in doubt, look out for signs stating ‘fietspad’, and keep your eyes peeled for oncoming cyclists!

As luck would have it, the Dutch words for ‘left’ and ‘right’ begin with the same letters as their English equivalents. Both words are pretty easy to pronounce, too.

While being hungry certainly has its downsides, just remember that when you’re abroad, there’s always new food to try. Feeling super hungry? Head to a Dutch restaurant and order stamppot. You won’t be disappointed.

This exceptionally common Dutch adjective serves as a stand-in for the English words ‘nice’, ‘tasty’, ‘delicious’ and ‘yummy’ all at once. It is versatile to say the least, and can be used to describe many other things aside from food, including the weather, sleep and attractive people.

Feeling parched but don’t want to splash out on bottled water? Then ask your waiter for kraanwater when ordering a round of drinks. Interestingly enough, Dutch tap water ranks among the freshest and cleanest in the world.

Mag ik een beirtje? (Magg ick un beer-cher) – Can I have a beer?

Easily one of the most-used phrases in the entire Dutch language, Mag ik een biertje? works in any setting that involves beer. Prefer something other than beer? Then replace een biertje with whatever drink takes your fancy, such as een rode wijn (a red wine) or een cola (a cola).

Hoeveel is deze? (hoo-fale iz dez-uh) / How much is this?

If you’re ever uncertain about the price of something, just ask whoever’s in charge Hoeveel is deze? while pointing at the item in question. Make sure to learn Dutch numbers first though, as you’re unlikely to understand their answer otherwise! See below.

Feel as though something’s price doesn’t match its quality? Then, consider using this handy phrase to express your unwillingness to part with your hard-earned cash. If you’re really lucky, they might even lower the price for you.

The starting point of most conversations in the Netherlands, hoe goat het? functions much like its English equivalent of ‘how’s it going?’ It’s used as a conversation-starter, rather than a personal question.

Turn a stranger into a friend with this simple phrase. Want to add some extra oomph to your charm offensive? Put super at the beginning of the sentence, changing it to super leuk je te ontmoeten.

Wil je eits drinken? (vil je eets drinken) – Would you like something to drink?

Like elsewhere in Europe, it is a common courtesy in the Netherlands to ask other people whether they want a drink when you’re heading to the bar. Don’t expect to pay right away though, as most pubs and cafés keep tabs on customers’ orders, rather than billing for each consecutive round.

It is often said that bikes outnumber humans in the Netherlands. With this in mind, it is probably a good idea to learn the local term for a two-wheeler. By the by, the plural of fiets is fietsen, not fietses or fietss.

If you’re staying in the Netherlands for more than three days, it is almost certainly going to rain at some point. Don’t worry about the weather too much though, as there’s plenty to see and do indoors.