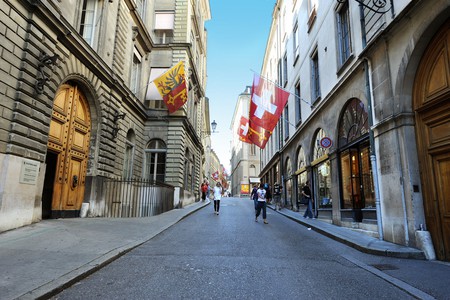 Of all the cafes specializing in Swiss cheese fondue, Café du Soleil claims to serve the very best in town—its popularity certainly testifies this. The humble eatery is almost always full, so visitors will do best to book ahead to avoid disappointment. Although the menu is varied, the thing to order here is either traditional fondue, made with cheese from La Roche village, north of Gruyères, and a fruity wine, or else the Swiss specialty Malakoffs—deep-fried cheese balls with a strong indulgent flavor. The fondue arrives at the table in a fire-lit pot, accompanied by a bottomless basket of bread, and it is recommended to order one of the unusual salads as a side. The building itself hails back to over 400 years ago, before even the construction of the Temple du Petit-Saconnex facing it. The atmosphere is cozy but light and airy, delivering an edge of sophistication to this traditional meal.

In the heart of Geneva’s Old Town is the luxuriously renovated, historic Hôtel Les Armures, dating back to the 13th century, though its current form is a 17th-century, Italian-inspired renovation. The associated Restaurant Les Armures has retained all of its rustic charm, with a simple terrace in the shadow of ancient archways, nostalgic interior furnishings and a mosaic-tiled bar. The food and atmosphere maintain traditional undertones whilst providing a sophisticated gourmet experience. The long menu boasts many Swiss specialties, including raclette and fondue options, alongside soups, pastas, meat and fish dishes. The hotel and restaurant are so popular that their reputation even reached the ears of Bill Clinton on his visit to the city, and his letter of polite thanks has been cast in brass and now hangs as a gleaming tribute on the outside wall. 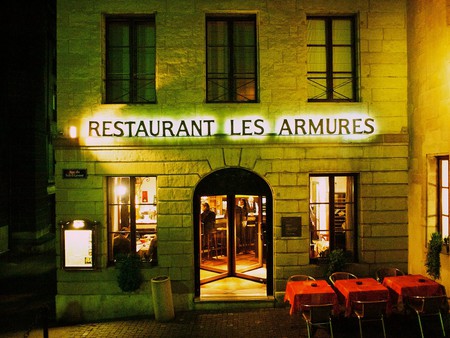 Chef Michel Roth, previously of L’Espadon in the Parisian Ritz Hotel, has now created one of the most celebrated restaurants in Geneva: the Michelin-starred Bayview at Hotel President Wilson. Recently renovated, the setting is simple and stunning, emphasizing the pure light that streams in through the windows, reflected off Lake Geneva just outside. All the food is locally sourced and crafted into culinary art, supplemented by contemporary artworks hanging on the walls. The tasting menu includes delicacies such as seared ormers (sea snails) from Plougastel with traditional pork sausage, served with some of the most impressive wines of the region.

Located in the city center’s elegant Mandarin Oriental Hotel, right on the banks of the River Rhône, Rasoi takes Geneva’s legacy of fine dining to new heights with its innovative twist on Indian cuisine. Owned by award-winning UK-based Chef Vineet Bhatia, Rasoi is the only restaurant in Europe serving ‘ethnic’ cuisine to have been granted two Michelin stars. The interior outfit was designed by Adam Tihany, renowned for his commissioned contributions to celebrity-owned restaurants, and he has certainly impressed with his distinctive style here; the rich, earthy purple hues of the furnishings are offset by mother-of-pearl details built into dark wooden panels. The overall effect is a strikingly modern and indulgent atmosphere, setting the scene for unusual signature dishes such as tandoori smoke cloud salmon, semolina crusted wild sea break and salmon chutney, and chicken with black peppercorn sauce served with an open chicken samosa. 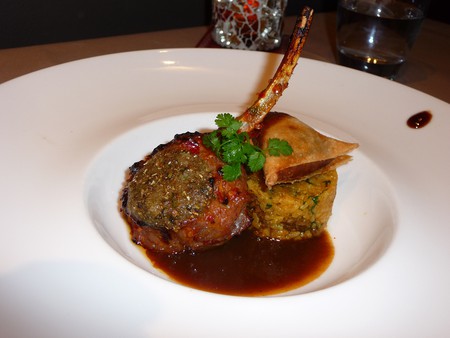 Boutique Hotel
Facebook
Email
Twitter
Pinterest
Copy link
Share
Map View
This stately home in Geneva’s wine-producing countryside was once a noble castle, and now its outbuildings house hotel and restaurant Châteauvieux—one of the most sophisticated restaurants in the area, always the first recommended by locals and tourists alike. Head Chef Philippe Chevrier develops an inventive seasonal menu, full of delights such as Brittany lobster marinated with ginger, served with zita pasta and green apple in coconut. Whilst the food is at the cutting edge of gourmet innovations, the atmosphere remains cozy and quaint, producing a dining experience that is unlike any other in the region.
Open In Google Maps
16 Chemin de Châteauvieux , Satigny, Switzerland
+41227531511
Visit Website
Visit Facebook page
Give us feedback

Located in a magnificent 18th-century building, in the gorgeous park overlooking Lake Geneva and the Alps beyond, is Hôtel Restaurant du Parc des Eaux-Vives, one of the most exclusive destinations for fine dining and stunning panoramic views. In addition to indoor and terrace seating, the restaurant also offers picnic baskets for those opting for a more intimate, self-made dining experience. The service and presentation here is sleek and elegant, whilst the decor is subtly indulgent, including velvet armchairs and white porcelain crockery. The menu changes each season, and is split into starters, an ‘earth menu’, a ‘lake and sea menu’ and a ‘sweets and cheese menu’, featuring such highlights as sautéed Swiss rib of veal and grilled whole sole from France’s Île d’Yeu. The brasserie lunch menu is equally as exciting, and there is an array of Swiss and regional wines to complement the meal. 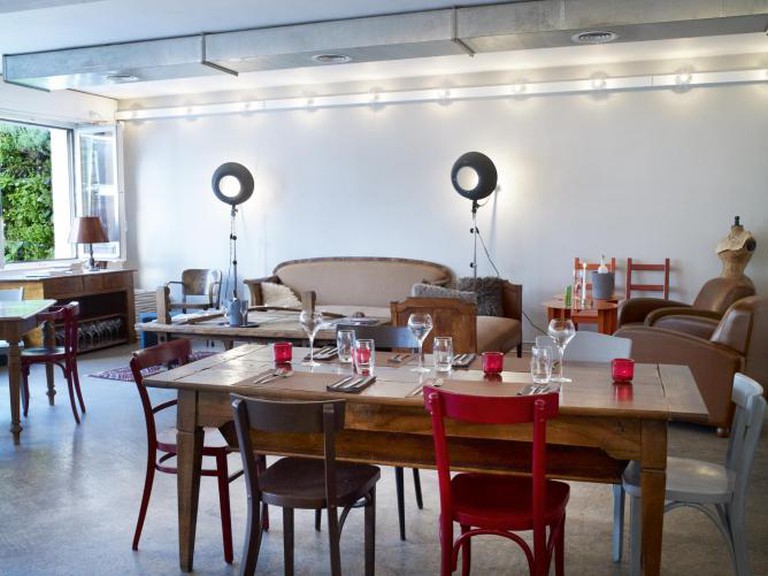 Café des Bains | Courtesy L'Adresse
Café des Bains is an inherently modern establishment, perfectly capturing the vibe of the trendy des Bains quarter with its contemporary decor and tastefully curated art. What was once an old neighborhood bistro was transformed almost 20 years ago into a chic, bohemian coffee-house for visitors to take a break from perusing the district’s many museums and galleries. Both the design and the food somehow traverse a line between refreshingly simple and beautifully detailed, as epitomized by boldly-flavored dishes such as zucchini and leaf salad and zucchini in a fragrant oil dressing, with porcini, bacon and poached egg. The menu offers a world cuisine including light dishes and hearty options, and there are specials to suit each day of the week.
Open In Google Maps
26 Rue des Bains, Genève, Genève, 1205, Switzerland
+41223202122
Visit Website
Give us feedback

Demarcated by a bright red staircase, L’Adresse, a lifestyle boutique in a converted loft, holds many unexpected treats inside. Among the fashion wear and bespoke accessories is a contemporary bistro that spills over onto the delightful rooftop terrace. The owners’ philosophy sees them following both their own creative instincts and current trends, to produce a unique style in both the fashion items and the food, favored by Geneva’s young and stylish. The restaurant resembles a vast urban lounge, open both to the kitchen and the clothing displays, whilst the terrace is an oasis of breezy greenery above the city’s streets. The food is light and fresh, including an entire organic menu, alongside homemade juices and regular dishes each with their own quirky name. The daily specials range from crumbled chicken with candied grapes and quinoa with zucchini and carrots to fillet of sea bream with sun-dried peppers and Moroccan spice. There’s an extensive wine list and cocktail menu for a casual evening in this renovated art studio. 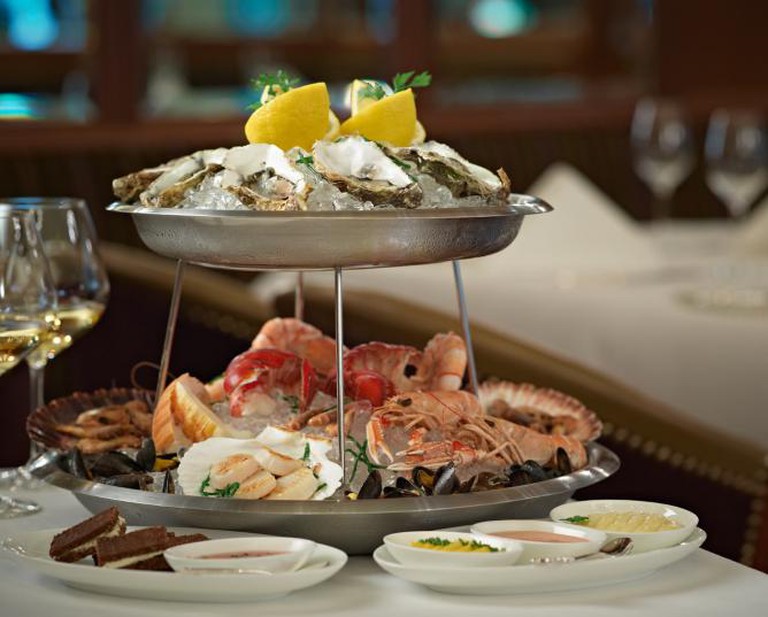 Café du Centre, Place du Molard | Courtesy Café du Centre
Another historic café in the city is the appropriately named Café du Centre, situated in an old brewery building, converted into a grand bistro completed with high ceilings and waiters wearing tuxedos. The dishes are carefully presented and enjoyed in the packed restaurant all days of the week, but the specialty here is the Sunday brunch, one of the only places in town open for it. The options are even more extensive for this meal than for any other, including blueberry pancakes, French toast with maple syrup, Cumberland sausages, streaky bacon, and a whole range of cooked meals, open sandwich combinations, sweet pastries, and even oysters. On sunny days be sure to grab a table on the busy terrace to enjoy a lazy al fresco meal.
Open In Google Maps
5 Place du Molard, Genève, Genève, 1204, Switzerland
+41223118586
Visit Website
Give us feedback 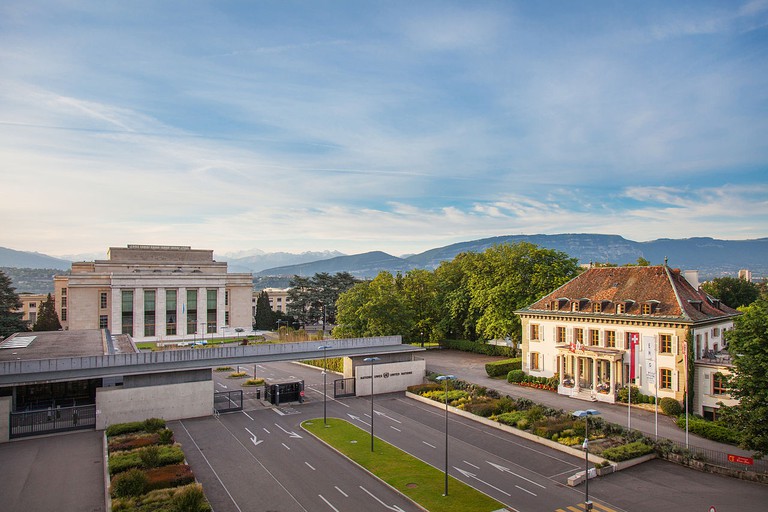 Directly outside the grand United Nations offices stands the only restaurant you’ll see in the park grounds. Restaurant Vieux Bois actually belongs to the Geneva Hotel School, and is the perfect place to sample the highest quality food at very reasonable prices. A favorite with international political figures, the service is impeccable, matching the old-world charm emanating from the 18th-century building. The menu changes every six weeks, giving the trainee chefs a chance to try out experimental world-fusion plates alongside traditional dishes. Examples include teppanyaki of glazed sea bass with honey, lemon, vegetables and basmati rice, and roasted half pigeon, with glazed turnip with foie gras grillons and strong juice with morello cherries. The ambience of this establishment is simply of a different fashion to the modern Michelin-starred restaurants, and well worth the visit for the nostalgic experience and the highest quality food.