The Top Things to See and Do in Malasaña, Madrid

There’s more to the Madrid art scene beyond the Prado and the Reina Sofia. Retro bars, buzzy terraces and bags of history make Malasaña the top neighbourhood for arty establishments and a hip cultural scene. Whether you like your art on bar walls or inside churches, keep this guide handy for your next visit to the Spanish capital.

If you’re looking for hipster cafes, vintage clothes boutiques and excellent street food, Malasaña will not disappoint. This creative neighbourhood was the birthplace of La Movida, the 1980s post-Franco countercultural wave, and is now home to a thriving alternative scene. Discover what to do in one of the coolest areas of Madrid with this guide. 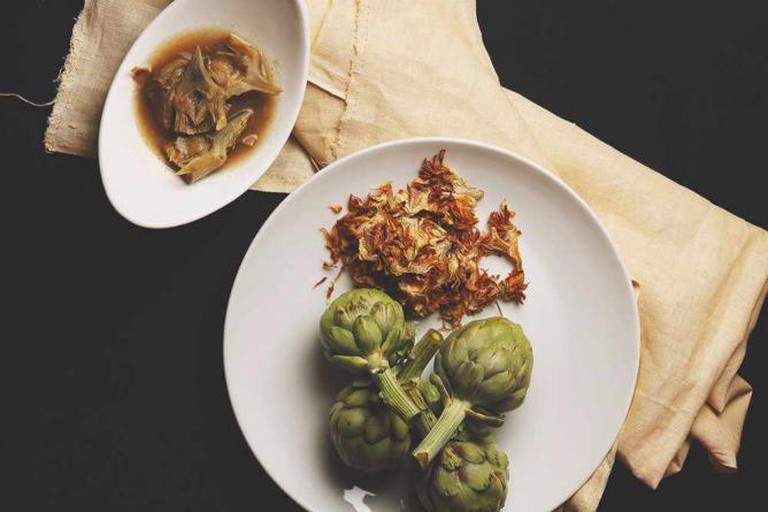 Courtesy of La Tasquita de Enfrente
Serafin López established La Tasquita restaurant as a neighbourhood favourite over the course of 30 years before being joined by his son Juan, who switched from insurance to cooking at the age of 40. Now, this dynamic father-and-son team presents a daily changing menu of dishes made with no more than three ingredients, usually focused on Madrid’s freshest fish and seafood. To experience the full range of their minimalist creativity, book a nine-course tasting menu, available with or without paired wines. 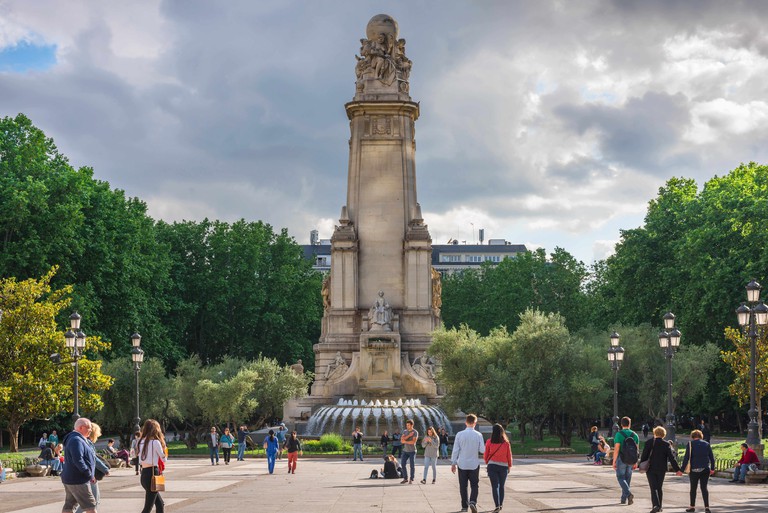 Located at the lively nexus of Gran Vía and Calle Princesa, Plaza de España is one of the largest squares in the Spanish capital. It’s overlooked by two of the city’s tallest buildings – the rectangular Torre de Madrid and the more boxy Edificio España, both of which were constructed in the 1950s and are now hotels. On the plaza itself you’ll find dainty ponds, landscaped gardens and a monument portraying writer Miguel de Cervantes and his two greatest creations, Don Quixote and Sancho Panza. 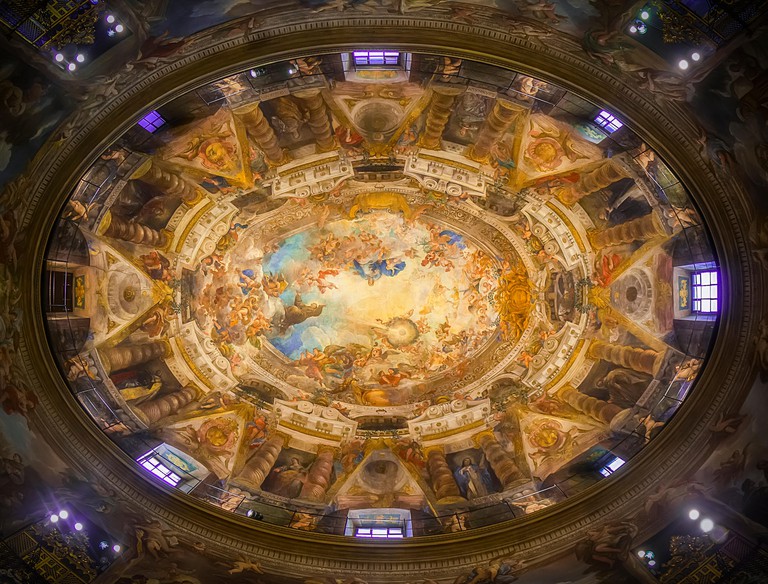 The somewhat dull exterior of this 17th-century church belies what’s hidden within: covering its interior walls and ceiling are some of the most colourful frescoes in Madrid. They’re the work of two leading late-baroque court painters, an Italian phenomenon named Luca Giordano, whose speed of working earned him the nickname Luca Fa Presto, or Luca Paints Quickly, and Francisco Ricci, one of the first artists in Spain to paint in the baroque style. The ornate altars were added in the 18th century.

Watch a play at Teatro Victoria

The intimate Teatro Victoria specialises in contemporary versions of classic plays, stand-up comedy and children’s shows. Large-scale spectaculars such as Victor Hugo’s Les Misérables are imaginatively reworked for a small stage and feature some of the Spanish capital’s most promising talent. When the curtain comes down, walk for five minutes to Calle de Fuencarral for good drinking and dining options as you critique the night’s performance. 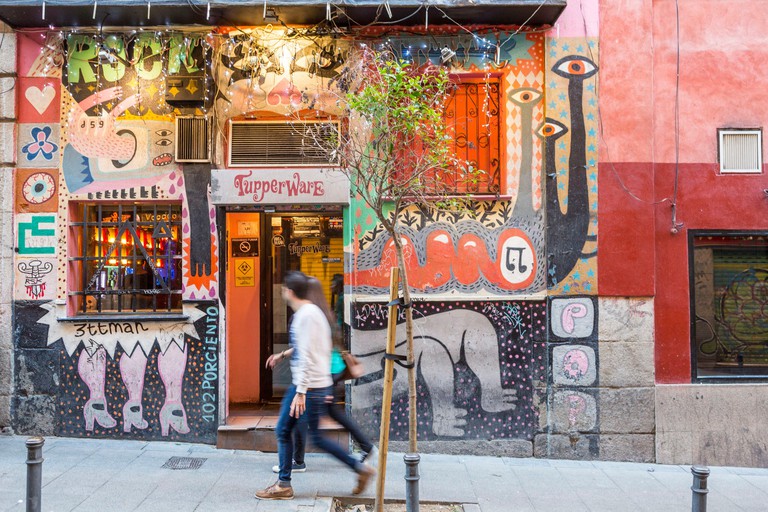 © Hemis / Alamy Stock Photo
None of Malasaña’s bars quite capture the neighbourhood’s creativity and independence as well as TupperWare, where the interior walls are covered with a cartoon mural by Mauro Entralgo. Painted in 1997, it depicts 41 of the area’s most-adored characters, many of whom are still close friends of the owners, as well as committed regulars at the club. Bespectacled Entralgo himself also appears on the wall – see if you can spot him. TupperWare is also a great music venue for indie, rock and ’60s music to go with your inexpensive drinks.

It’s hard to imagine this warehouse-style food hall existing anywhere else than Calle de Fuencarral, Malasaña’s trendiest street. Spread over two floors of exposed pipes, subway tiles and neon signage are stalls offering Spanish, Mexican and Korean food, two bars serving cocktails and international beers and ciders and a wine specialist . Yet it’s the semi-covered terraces that make this a place to linger late into the evening – there’s one on the ground floor and another in between the ground and first floors. 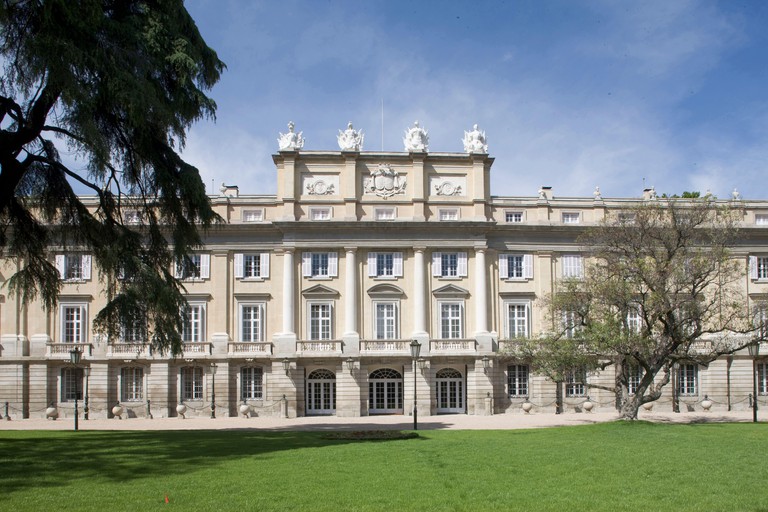 The neoclassical Palacio de Liria, hidden behind forbidding iron gates and meticulously pruned trees, was built between 1767 and 1785 for the Alba family, one of Spain’s oldest and wealthiest families. It was almost completely destroyed by fires during the Spanish Civil War (1936-1939). Miraculously, most of its treasures were rescued, including paintings by Goya, El Greco, Velázquez and Rubens. An audio guide featuring classical music and voice actors playing bygone aristocrats brings the palace to life. 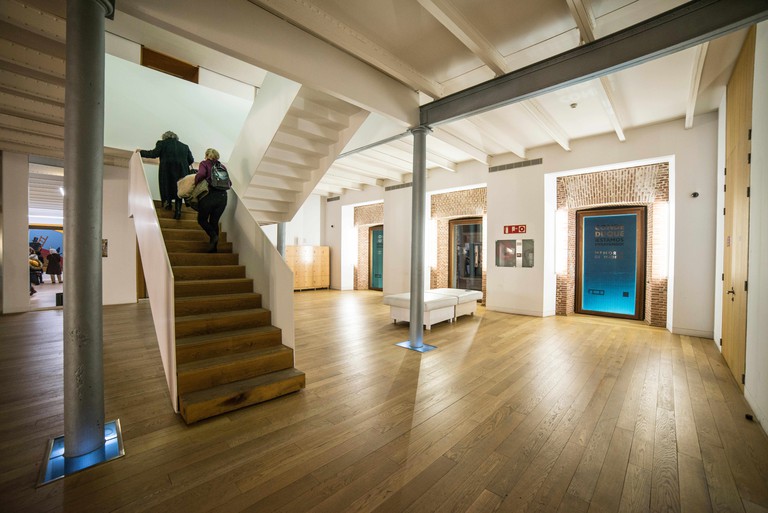 Malasaña’s Municipal Museum of Contemporary Art occupies a sprawling army barracks completed in 1730, which for a long time was Madrid’s largest building. Spread throughout its sparsely decorated spaces is a permanent exhibition of paintings, installations, photographs and drawings that explores abstraction and realism. There’s also a life-size recreation of the wacky studio of Ramón Gómez de la Serna, a Spanish writer who greatly influenced surrealist director Luis Buñuel. 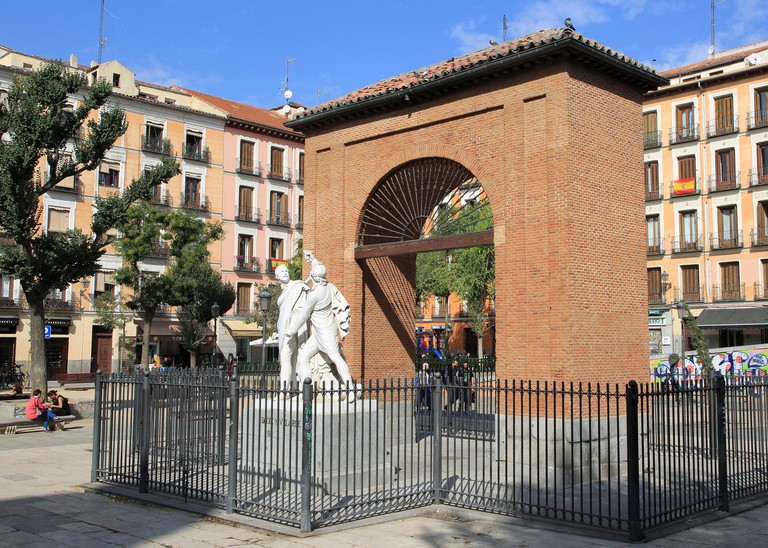 Spacious terraces can be hard to find in central Madrid, but there are several on Plaza del Dos de Mayo, arguably Malasaña’s most sociable square. It’s named after the tumultuous events of 2 May 1802, when Madrileños resisted the invading forces led by Napoleon, and at its centre are monuments to two military leaders who died in the (ultimately unsuccessful) rebellion. The statues are surrounded by playgrounds and terraces that fill up quickly in the evenings and at weekends – Cafe Tatiana has one of the best.

Bar, Spanish, European, Wine, Beer, Cocktails, $$$
Facebook
Email
Twitter
Pinterest
Copy link
Share
Map View
As will be obvious the moment you step through the doorway, this grungy, retro nightspot (whose name is an amalgamation of Madrid and Brooklyn) is run by the same family as TupperWare. There are two tiny floors on which to drink, listen to classic punk and rock, watch silent black-and-white films or play the pinball machine. Unusually, live acoustic sets are performed during the day at weekends, usually starting around midday.
Give us feedback