The Most Beautiful Buildings in León, Spain 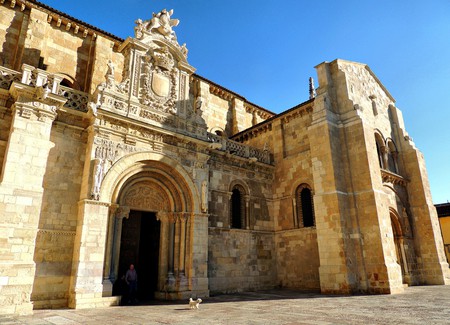 The city of León is one of the most elegant in Spain‘s region of Castilla y León, filled with grand historic buildings, contemporary museums and even a design by Antoni Gaudí. Here’s our pick of the city’s most beautiful buildings. 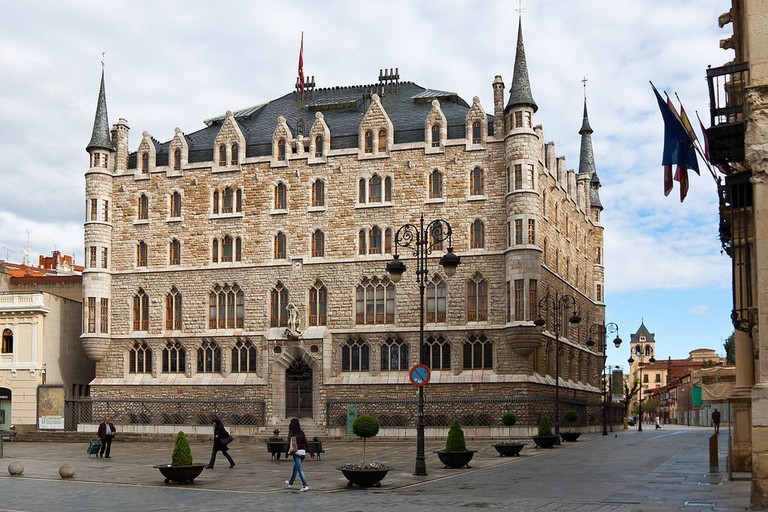 La Casa de Botines, Gaudí, León | © xavi lópez / Wikimedia Commons
The Casa Botines is one of León’s most striking buildings, most likely because it was designed by one of Spain’s most famous architects – Antoni Gaudí. It was built in 1892 and was inspired by the city’s Gothic cathedral, although it somewhat resembles a medieval castle. The building was opened to the public for the first time in 125 years as a museum in April 2017.
Open In Google Maps
5 Plaza de San Marcelo, León, Castilla y León, 24002, Spain
+34987353247
Visit Website
Give us feedback 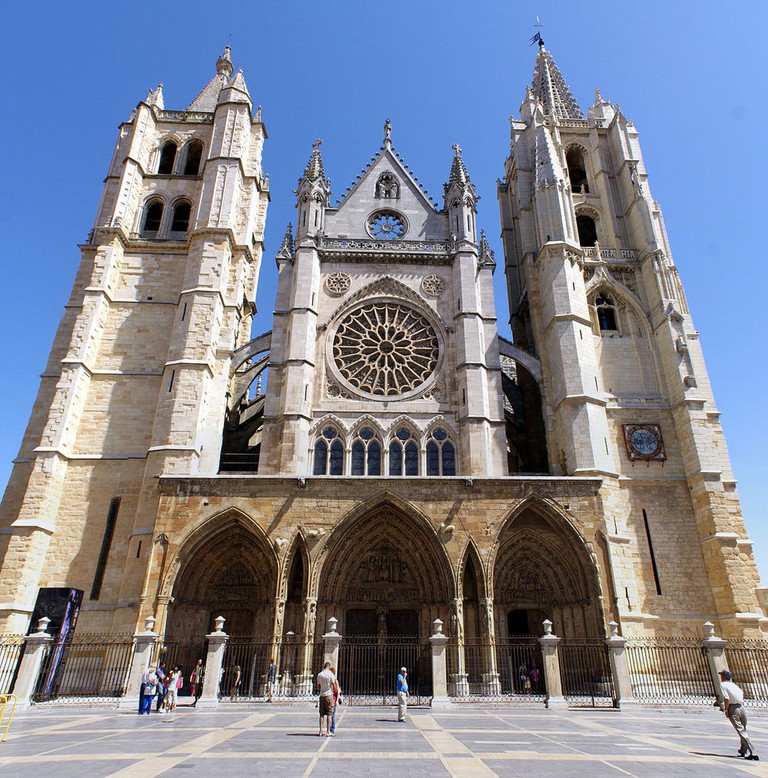 Catedral de León, Spain | © Rastrojo / Wikimedia Commons
The Catedral de León is one of the grandest in the whole of Spain. It was originally built by Ordoño II on the site of his royal palace, in order to show his thanks to God for defeating the Moors. But even before the palace was built, there were Roman baths here, dating back to the 2nd century. The cathedral underwent many renovations and additions over the years, but most of it dates from the 13th to the 15th centuries. It has a beautiful rose window on its façade and is filled with stunning stained glass windows.
Open In Google Maps
s/n Plaza Regla, León, León, 24003, Spain
+34987875770
Visit Website
Give us feedback 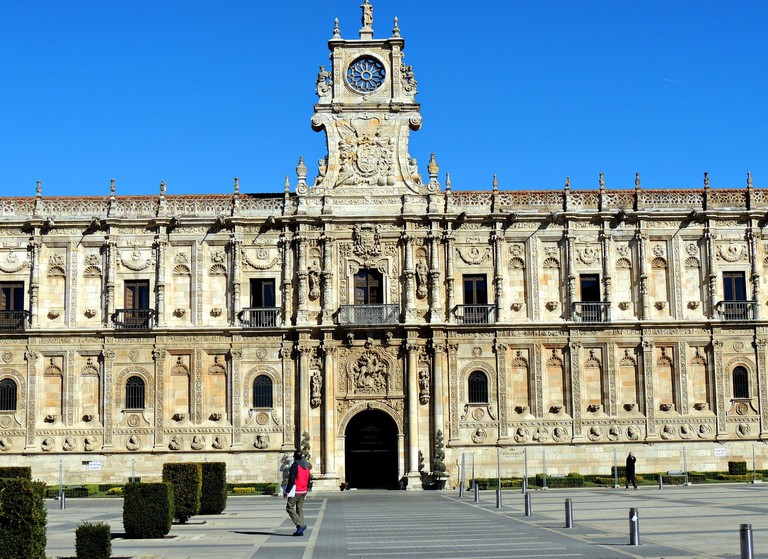 Convento de San Marcos, León, Spain | © Jose Luis Cernadas Iglesias / Flickr
The Convento de San Marcos is one of the architectural jewels of León. Its impressive facade is stretches for 100 metres, and its origins date back to the 12th century, when it was built to house pilgrims travelling along the Camino de Santiago. The imposing Gothic-Plateresque-style building we see today, however, was not built until between the 16th and 18th centuries. During this time, it served as the peninsula’s western headquarters for the Military Order of Saint James, and later as a monastery. Today, the old monastery is a luxury hotel, as well as a church and a museum.
Open In Google Maps
6 Plaza San Marcos, León, Castilla y León, 24002, Spain
Give us feedback

Located in the centre of the city, opposite the Casa Botines, the Place of the Guzmanes was built for the wealthy Guzamanes family in place of their old home. Renaissance in style with Plateresque touches, construction began on the palace in 1560. It remained unfinished for many years, however, and wasn’t fully completed until 1977. Today, visitors can see its intricate 16th-century door, flanked by graceful columns, the presidential balcony and inner courtyard surrounded by glass arcades. 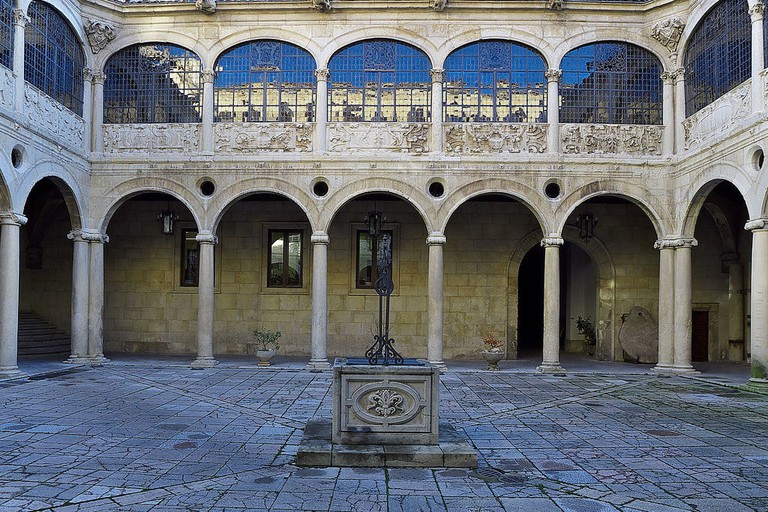 The Real Colegiata San Isidoro is a royal collegiate, dating back from 1063. A huge honey-coloured structure, both elegant and grand, it houses the Royal Pantheon, church, collegiate library and a museum. As well as all of this, the building doubles up as a luxurious hotel, where you can sleep amongst cloistered corridors filled with antiques.

León’s Plaza Mayor is a graceful space, surrounded by colonnade arches, multi-coloured buildings and charming balconies. It was built in two stages, the first in 1672 and the second in 1677. It used to be called ‘Plaza Pan‘ Bread Square, because it was home to so many bakeries. At its centre sits the Consistory building, which was similar to a City Hall. Baroque in style, it was built between 1674 and 1677 and is topped by elegant spires. Today, it is home to a handicraft workshop. 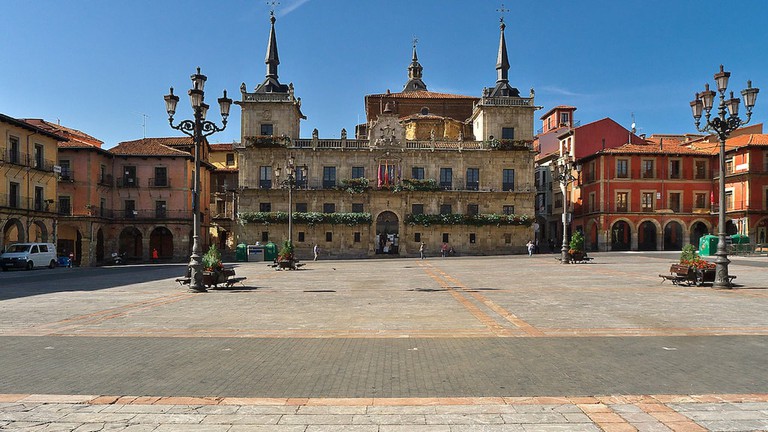 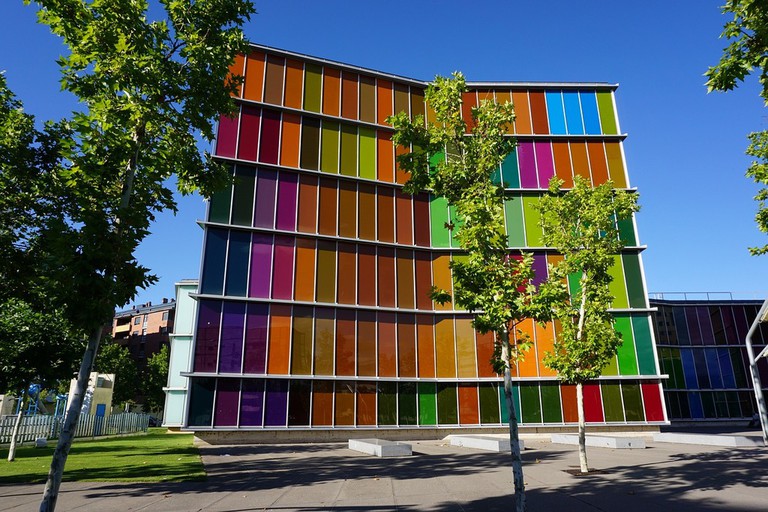