The Best Hotels in Salamanca for Every Traveller 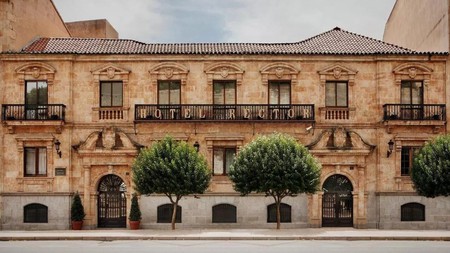 Hotel Rector is one of Salamanca's many beautiful old buildings which have been transformed into luxurious hotels | Courtesy of Hotel Rector / Expedia.com

Sitting in the Castile and León region in northwestern Spain, Salamanca is a historical marvel. Here you’ll find one of the oldest universities in the world, two ancient cathedrals with peculiar carvings, and the dazzling Baroque architecture of Plaza Mayor. The golden city is also home to museum-worthy hotels, including converted monasteries and an ancient hacienda that once hosted Christopher Columbus. These are the best hotels in Salamanca. 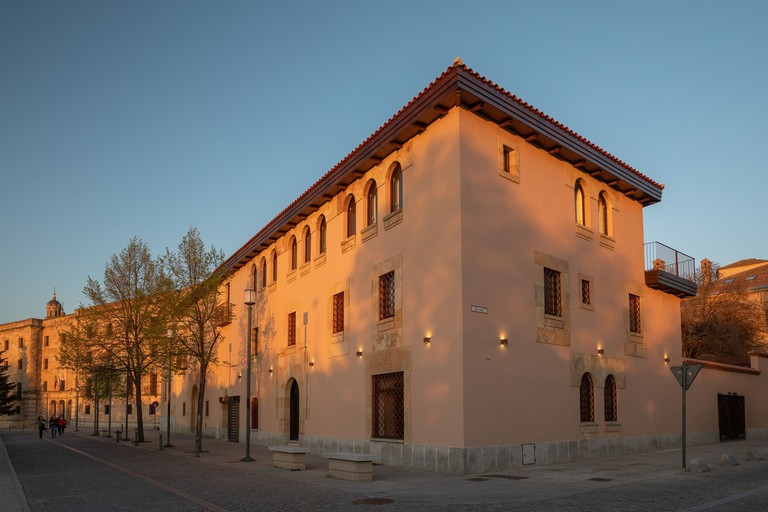 Courtesy of Hotel Melibea / Expedia.com
View Rooms
Built in the 16th century and restored in the late 20th, the building now occupied by Hotel Melibea has roots as a college for knights of the Order of Santiago. A more recent update has given the hotel a contemporary edge, with clean lines, minimalist decor and splashes of modern art. Enjoy a cortado or cerveza in the peaceful walled garden, or take the short stroll into the town centre five minutes away.
EVERYTHING YOU NEED TO KNOW 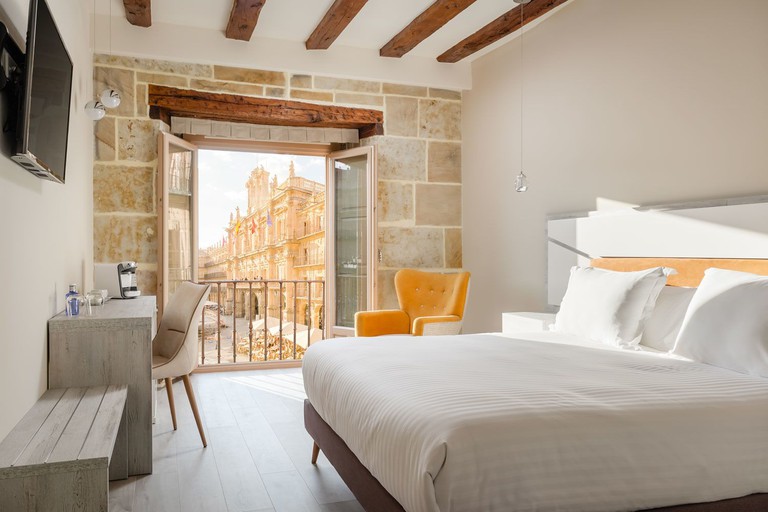 Courtesy of Salamanca Luxury Plaza / Expedia.com
View Rooms
The Salamanca Luxury Plaza offers some top-quality accommodation housed in the stately building that encloses Plaza Mayor. Modern rooms beautifully fuse simple, light decor with original architecture, such as exposed stone and wooden beams, and offer views either over the main square or market square behind. With central Salamanca on your doorstep, you’re steps from numerous cafés and restaurants, but if you’re feeling lazy you can also order breakfast to your room.
EVERYTHING YOU NEED TO KNOW 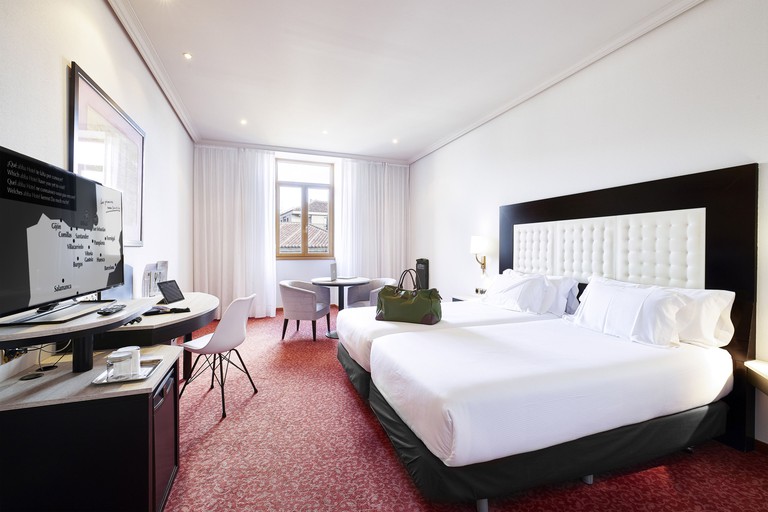 Courtesy of Abba Fonseca Hotel / Expedia.com
View Rooms
A formidable-looking old stone building has been given a modern makeover and filled with all the modern comforts you’d expect from an upscale hotel. Carpeted floors, Nordic duvets and padded headboards bring an elevated level of comfort to guest rooms; upgraded perks include coffee pod machines, thick robes and cathedral views. The location – on the edge of the historic quarter – means most of the Salamanca sights are easily accessible on foot. On your return, unwind in the hotel sauna, steam room or jacuzzi.
EVERYTHING YOU NEED TO KNOW 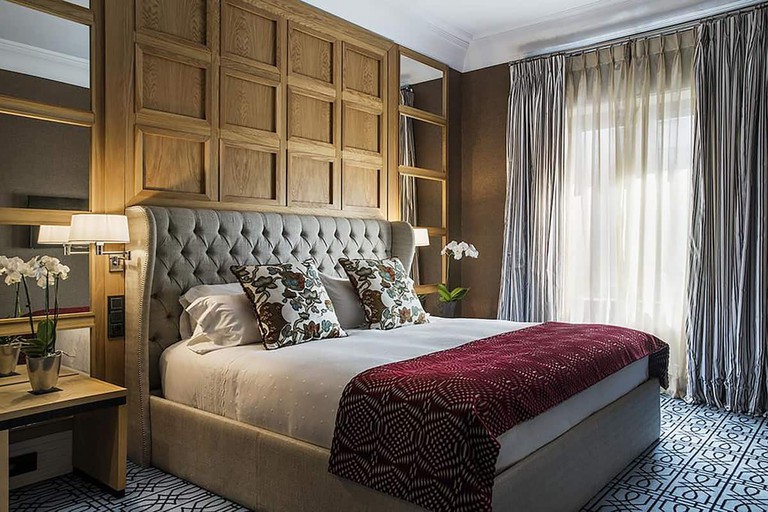 Courtesy of Hotel Rector/ Expedia
View Rooms
Built in the 1940s, with yellow sandstone walls and iron balconies, Hotel Rector oozes elegance and sophistication, while retaining a laid-back charm. The 13 bedrooms come with marble bathrooms, Bulgari toiletries and mahogany furniture. A personalised service, which includes a nightly turndown and private chauffeured car on request, ensures a fuss-free stay. Centrally located, it’s just a few minutes’ walk to the Old and New Cathedrals – check out the mysterious stone carvings – and Plaza Mayor.
EVERYTHING YOU NEED TO KNOW 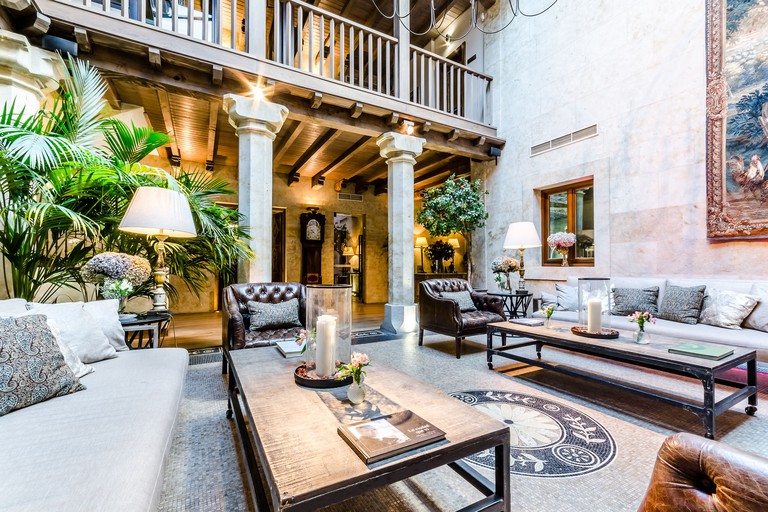 Courtesy of Grand Hotel Don Gregorio / Expedia.com
View Rooms
Sitting in a 15th-century palace, Grand Hotel Don Gregorio is now one of the finest luxury hotels in Salamanca. Here, 17 rooms and suites have been dressed in a contemporary decor while retaining a certain classic elegance – the intimate setting and sophisticated environment will make it hard to leave your room. The hotel also features a restaurant serving some of the best tapas in the city, plus a neon-lit spa with waterfall showers, a whirlpool tub and bubble beds.
EVERYTHING YOU NEED TO KNOW 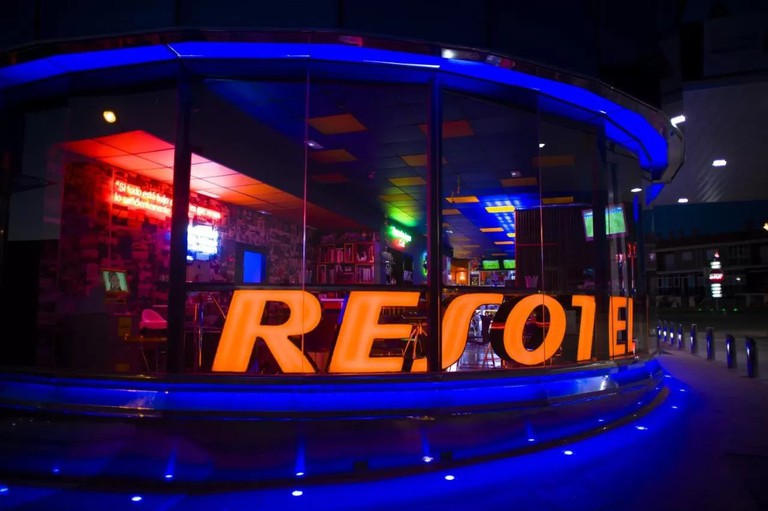 The sleek, glass façade of the Resotel is your first hint that this is a design-forward retreat built for a younger crowd. The stylish rooms are no different, with ambience lighting and a minimalistic design. There’s also a sun terrace with an outdoor swimming pool, perfect for sunny Salamanca afternoons. If you get hungry, the hotel has an atmospheric pizzeria just down the road, where private booths are lit by neon signs. 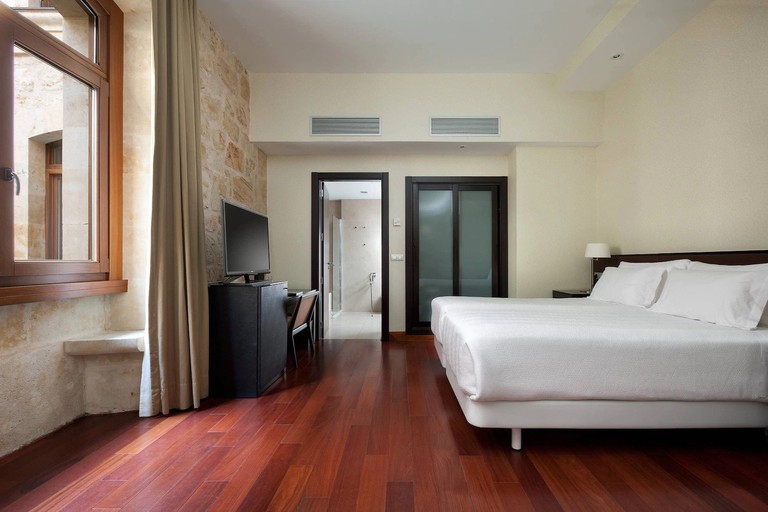 Right in the historic quarter, this tranquil retreat is ideal if you’re in Salamanca to admire the ancient architecture. When you’re not out exploring, the hotel has 37 rooms decorated in a minimalist style with dark wood features and bright white linens. Start your day with an extensive buffet breakfast featuring pastries and cold cuts. And in the evening, head to the hotel bar to sip cocktails or to make your way through the wine list. 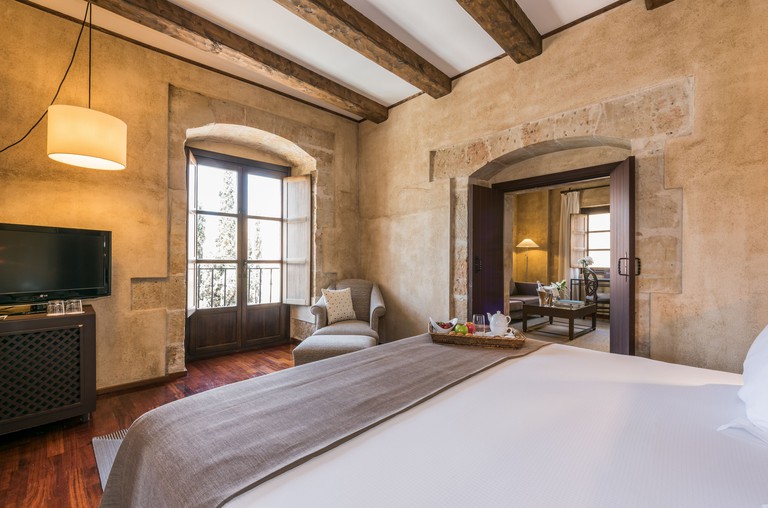 An attraction in itself, Palacio de San Esteban is situated within a renovated old Dominican convent, which dates back to the 16th century. You can dine under stone arches in El Monje, a contemporary Castilian restaurant, or sip wine on the summer terrace while admiring views of the cathedrals. Rooms come in a classy mix of white, taupe and coffee, with luxuries including rainfall showers and a pillow menu. 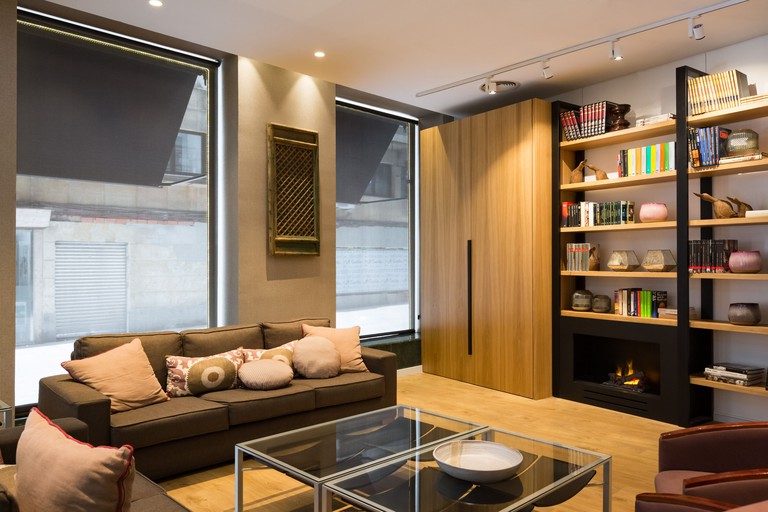 Opened in 2002, this hotel made a name for itself by providing excellent service and a memorable stay. That starts every morning with a breakfast buffet – try the Spanish potato tortilla and Catalan tomato bread. There’s also a welcome dipping pool and sun loungers in the solarium, ideal for a post-adventure splash. Rooms come in a modern black and white, softened by wooden floors. For added luxury, book the Superior Room with a jacuzzi. 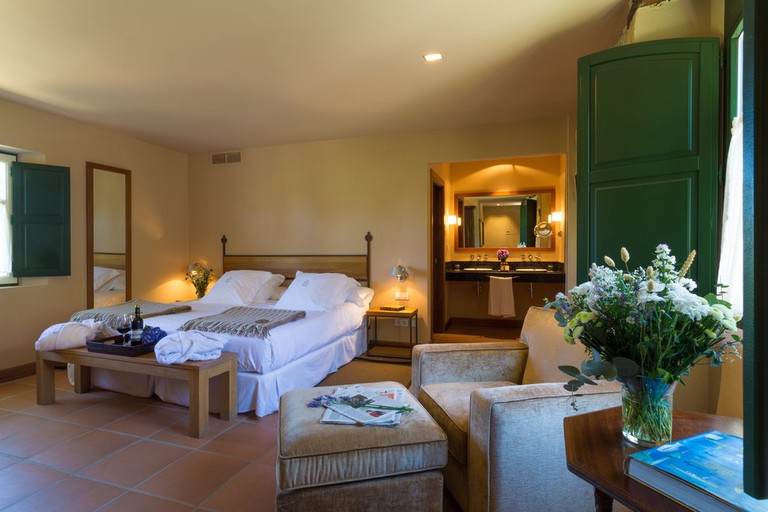 This hacienda once played host to Christopher Columbus, who spent his time here trying to persuade Queen Isabel’s advisor that a new lane to the Indies would be a good idea. Your stay will likely be less demanding. Instead, spend your time dining at Zorita’s Kitchen, which serves organic produce from the hotel farm. There’s also a luxury spa, found in the watermill which dates from 780, plus the Columbus Bar, where you can drink the home-made craft beer of the same name, or a cocktail made with signature rum. 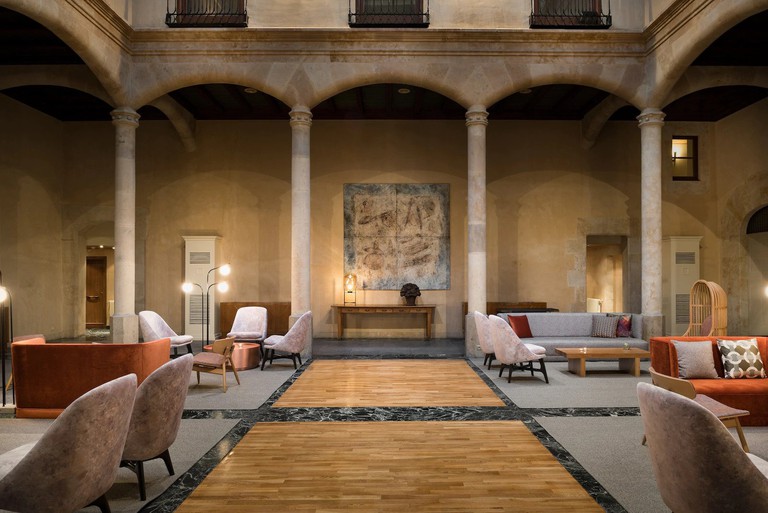 Constructed on the grounds of a 16th-century palace, this hotel retains original features while embracing the modern. The rooms and suites come in a calming mix of creams; book one with a view of the old Dominican convent. And before you head out for the day, take advantage of the breakfast buffet, which includes pastries, cold cuts and made-to-order hot dishes. During your stay, visit Casa de las Conchas, which sits just around the corner, a 500-year-old building dotted with shells. 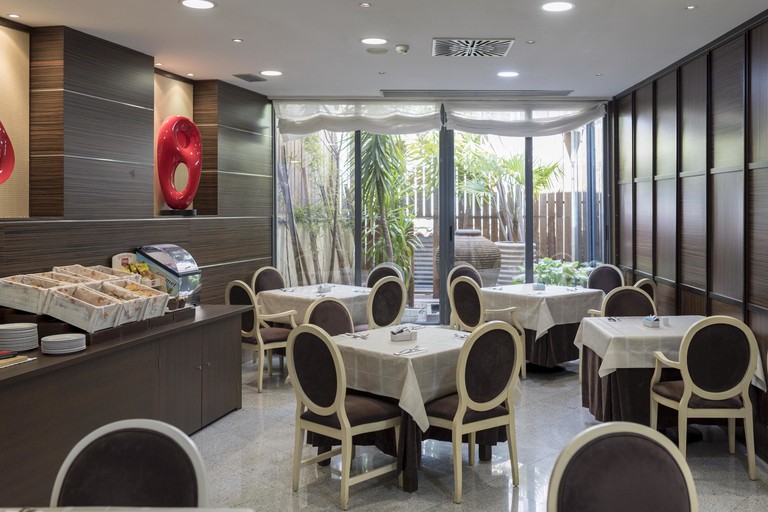 Courtesy of Hotel Soho Boutique / Expedia.com
Found in the Old Town, Hotel Soho Boutique is a sophisticated retreat for the urban explorer. Start your day of adventure with the in-house breakfast buffet, while the hotel bar provides snacks and drinks should you need a top up. Afterward, take a quick trot to nearby Plaza Mayor and Casa de las Conchas, both under a five-minute walk away.
Open In Google Maps
5 Plaza Ángel, Salamanca, Castilla y León, 37001, Spain
+34923993900
Visit Website
Give us feedback 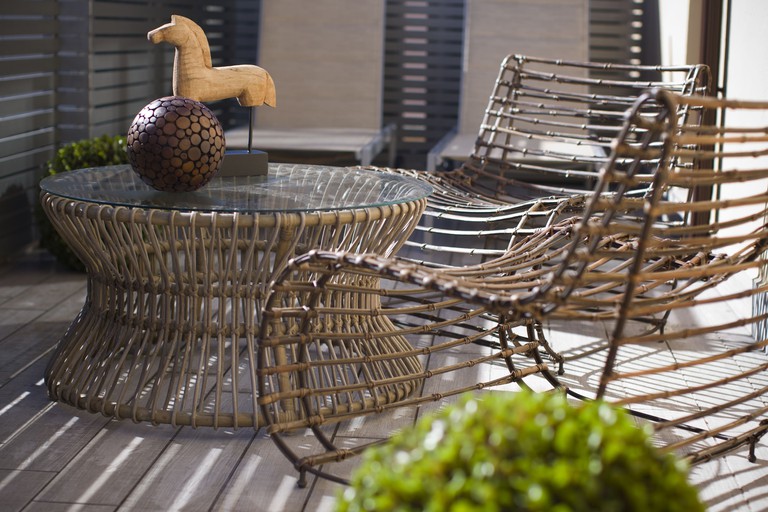 If you are looking for a more independent stay, rent an apartment with Salamanca Suite Studios. Each comes with a designer kitchen, Nespresso coffee machine and daily housekeeping. You’ll also get access to resort-like services including laundry, guided tours and babysitting. The complex sits on Plaza de la Libertad, which means Zazu Bistro, one of the finest eateries in the city, is just around the corner.