A Graffiti-Lover’s Guide to Malasaña, Madrid 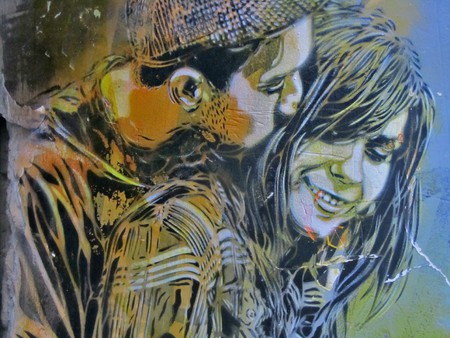 Malasaña has long been Madrid’s most alternative area. Throughout the 1980s it was the epicentre of La Movida, the counter cultural movement that followed the death of Spanish dictator Francisco Franco in 1975. With sudden newfound freedoms and a country in the early stages of democracy, many madrileños embraced all the new freedoms of the burgeoning scene, which spawned a host of artists, musicians and filmmakers, perhaps the most famous among them the Oscar-winning director Pedro Almodóvar. Today, Malasaña is still at the forefront of new and alternative expressions of creativity, and nowhere is this more evident than in the street art peppering its walls. If you would like an expert introduction to the graffiti of the area, consider taking a street art tour. But if you’d prefer to wander around by yourself, here are the graffiti artists you need to look out for.

Nuria Mora’s work moves past traditional graffiti into the realm of contemporary art. Her pieces feature vivid blocks of shapes and colour. As well as street art, Mora has designed murals for Facebook’s headquarters in London and Madrid and has exhibited all over the world. French artist El Tono is another contemporary who has often worked alongside Mora; both have exhibited their work at the Tate Modern. In Madrid, you can find their work around the Plaza Callao and Conde Duque areas.

In yo face #eltono

Parisian street artist Guemy has left his mark on the streets of Malasaña in beautiful stencil graffiti, focusing on portraits. His intricately designed pieces bring the people of the streets into full focus. He says on his website, ‘I place in the streets people and elements that belong especially to the streets. I like to show things and people that society aims to keep hidden: homeless people, smokers, street kids…’. His pieces cover walls as far afield as New York, Sri Lanka and Palestine. Keep your eyes peeled for some of his street art.

Borondo deftly combines painting with graffiti to produce works of street art that are worthy of any classical gallery. Born in Valladolid, Spain, he began making street art in 2003 and has since undertaken projects all around the world. His work mixes a watercolour aesthetic with intricately sketched details. Malasaña is home to some of his work; you can spot a shop window mural on Plaza de los Mostenses.

This Madrid native started making his own graffiti along Madrid’s M30 motorway at the age of 12. These days his work is politically charged and critical of those in power.

This is a mural in Malasaña’s neighbouring barrio of Chueca:

Next time you’re walking past some inconspicuous-looking railings, look closer to see whether graffiti artist E1000 has left his tag. He paints his name on railings and grates around the neighbourhood.

Frenchman Louis Lambert is a renowned international artist, with street-art projects throughout Europe, North Africa and North America. He is a key presence in Madrid’s contemporary urban art scene, using a range of techniques from ceramics to mosaics. He started off leaving graffiti on bill posters around the city, and today undertakes large-scale murals all over the world.