Serbia's Iconic House on The River

The gorgeous House on the Drina | © Alberto Loyo / Shutterstock

Men and women are searching more and more for ways to live away from the hustle and bustle of everyday life, and houses are popping up everywhere as a result. Does it get more remote than on an errant rock in the middle of a river? This is the story of Serbia’s House on the Drina.

A place to rest

The House on the Drina hasn’t always been there of course. Once upon a time, it was little more than a rock in the middle of the most iconic river in the Balkans, a body of water immortalised by the writing of Ivo Andrić and others. The tumultuous waterway has always been a popular swimming spot too, and it was the exhausting nature of tackling the waves that led to the house being built.

The year was 1968, and a group of young Yugoslavs had been enjoying the stretch of the Drina near Bajina Bašta for a while. The troupe would swim and swim, before stopping to rest and sunbathe on the rock jutting out from the river’s heart. The rock wasn’t exactly conducive to resting however, being all jagged rock and whatnot, so they decided to bring boards from the shore in order to create a more comfortable resting environment. 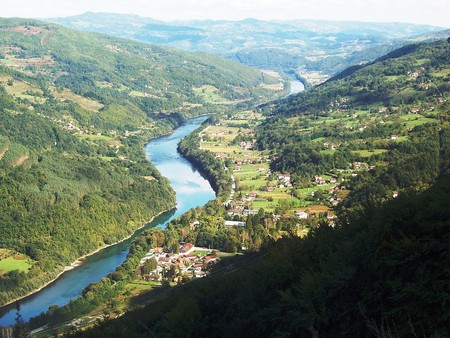 The building of the house, again and again

The whole ‘flowing river’ thing soon put paid to their plans, but these boys were ambitious to say the least. Led by Milija Mandić, the group rowed materials out to the rock throughout 1969 until their resting spot had become an actual house, albeit a one bedroom habitat without a bed. That wasn’t important, and the little lodging became the centre of summertime fun in and around Bajina Bašta.

The house remained a secret internationally, despite its local popularity. The winter rains would cause irreparable damage on all too frequent occasions, but the Serbs always set about redefining the word ‘irreparable’ by building up the iconic abode every single time. 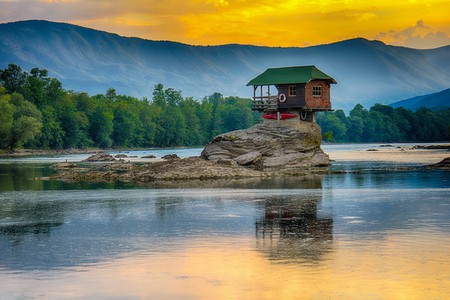 The house gained even more local press with the establishment of the Drina Regatta in 1994, an annual event that has since become the biggest in Western Serbia. The five day festival is the undoubted highlight of the calendar in these parts. It has been claimed that retail sales in Perućac are higher across this specific week than the rest of the year combined.

The House on the Drina couldn’t stay a local secret forever, and international fame eventually arrived in the 21st century. A photograph of the structure was featured in National Geographic’s ‘Photo of the Day’, and all of a sudden, the rest of the world woke up to the most adorable spot in the Balkans. Irene Becker’s photo did more for tourism in the region than anything prior.

The amount of attention given to the house has gone up since that photo in 2012, but the history of the dwelling remains something of a mystery. The story of Mandić and his friends is as much legend as it is fact, but nobody is in much of a hurry to disprove it. Why should they? The House on the Drina exists and is every bit as charming as the photographs suggest. How it came to be is less important than ensuring it continues to. 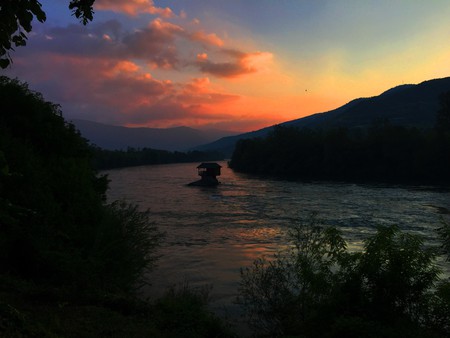