Yekaterinburg's Next Big Street Artist Is a Robot 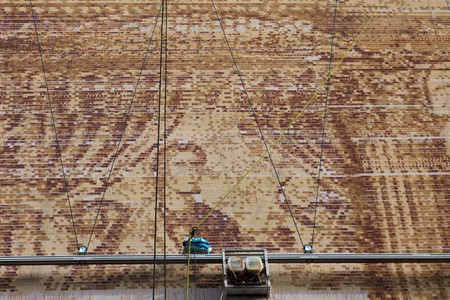 Street art made by robot | © STENOGRAFFIA

Yekaterinburg has acquired another piece of street art, adding even more creativity and colour to the city’s streets. Covering one side of a central building is a replica of an antique mosaic, constructed entirely by a robot. This new art form demonstrates how artificial intelligence can reinterpret old artworks in previously unimaginable ways.

Yekaterinburg, the Ural’s first city, has a vibrant cultural scene, unique to its history and location. It started with Old Man Bukashkin, a local bohemian artist and cultural icon, began to brighten up dead spaces in the inner-city with colourful murals from the 70s, 80s and 90s. His work instilled a proud culture of street and public art in the city, which continues today. The city also has a healthy indie music scene, which came out of the Ural rock movement in the 90s. Now, a new kind of artist is leaving an impression on the city.

The creative team behind STENOGRAFFIA, a Russian-wide street art festival that operates out of Yekaterinburg, designed an art-making robot as part of this year’s festival. The robot used AI technology to replicate a centuries-old mosaic onto the facade of the 9 Popova street building. The finished mural opened STENOGRAFFIA 2018 on May 29.

The artwork was based on a mosaic floor in a Roman villa at La Olmeda, which was built in Spain in the mid-fourth century during the Flavian Dynasty. The robot’s AI technology restored and recreated missing elements of the original mosaic so that it could then transfer a completed, to-scale, replica on the wall. 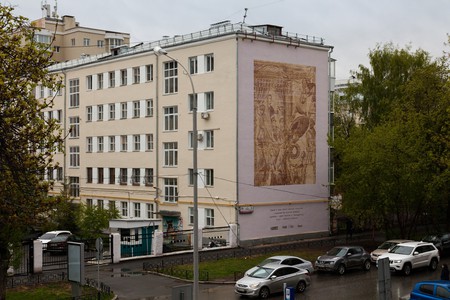 The mural takes up one side of a residential building block. | © STENOGRAFFIA

Anna Klets, the project’s coordinator, said the project serves to remind us that developing technology can continue the lifespan of older works of art and re-interpret them in contemporary ways, unthinkable at the time of creation. She says:

‘The artist who created this mosaic in the fourth century could not even imagine that in about 17 centuries, his work would be restored by an intellect of a completely other level and origin. As a result, his work was brought to life after centuries; this means that he is alive in our minds, too. The image created by two machines under our supervision is a message to contemporary artists: just imagine what can happen in future to you and things you create today?’ 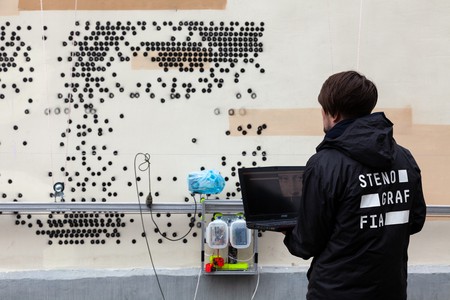 She went on to say, ‘It is absolutely impossible to predict how much technology will advance in a couple of centuries. Today, each of us can create something that will be continued later by someone from completely another world.’

This isn’t the first time Yekaterinburg artists have used art in an innovative and educational way. For STENOGRAFFIA 2017, the festival’s innovative creative team designed ‘Braille-Art’, a street art piece designed to facilitate engagement between visually impaired people, the wider community and Yekaterinburg. 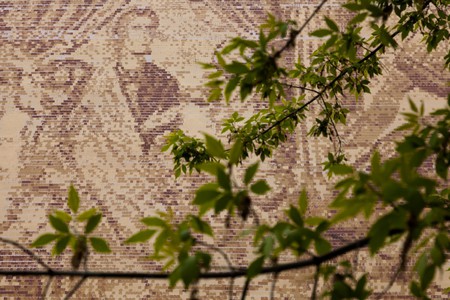 The machine's AI managed to recreate damaged parts of the mosaic. | © STENOGRAFFIA
Give us feedback