10 Moscow Novels That Every Muscovite Initiate Should Read

Moscow’s rich history and innumerable paradoxes has inspired some of the greatest novels in Russian literary history. More than a simple backdrop to these extraordinary narratives, Moscow is an integral character in the stories. From glamorous 19th century ballrooms to desolate suburban apartment blocks, and the metro that runs beneath them, we’ve picked 10 of the top Moscow novels that will give you a literary passport to this extraordinary city. 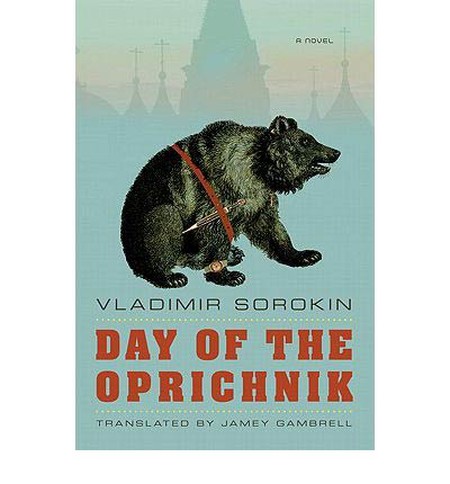 Day of the Oprichnik | © Macmillan US

Day of the Oprichnik – Vladimir Sorokin

Sorokin’s striking novels have gained him substantial international recognition as an author. His novel Day of the Oprichnik, set in 2028, is both a disconcerting side-step from a recognizable Moscow and potentially more ominously, a nod to it. We experience Sorokin’s dystopian world through the eyes of one of the ‘oprichniks’ (a term dating back to the days Ivan the Terrible), who seek out enemies of the reinstated Tsar, raping and pillaging to keep the population in a state of perpetual control and fear. Sorokin’s rendering of the world is as its darkest, and the carnivalesque prose is packed with pithy comments and oddly archaic statements that strike you in their direct delivery. This is a novel that focuses on the interplay of power and the grotesque normalization of violence in service to a higher ruler.

The Lady with the Dog – Anton Chekhov

Vladimir Nabokov cited this as one of the greatest shortest stories ever written. Dmitri Gurov, the central character. is a Moscow banker trapped in a loveless marriage. He distracts himself by engaging in frequent adulterous trysts. Whilst holidaying in Yalta, his attention is caught by a lady, Anna Sergeyevna, walking her dog on the sea-front. He resolves to make her acquaintance and a brief love affair ensues before Gurov returns to Moscow, expecting to quickly forgot the event. Astonishingly, he finds himself unable to shake the memory of Anna and comes to the realization that he is falling in love for the first time. This is simple, but beautifully written prose; Chekhov is, after all, the unequivocal master of the short story. His seamless economy of words reaches deep into the inner turmoil of his characters in just a few short pages. Gurov is tangibly bitter towards the Moscow society, its customs and its restrictions. Anna and Yalta, who remain constant in his thoughts provide a reverie from his claustrophobic reality. Although some have voiced their frustrations at a novel focusing so much on the potentially selfish actions of an adulterous middle-aged man, Chekhov reveals, through third-person narrative, the futility of reason and sense of fate in the face of love.

This novel is a heart wrenching, intimate portrayal of struggle one woman endures as she battles to survive in poverty-stricken circumstances. The Time: Night is a novel framed as the manuscript left behind by Anna, a woman striving to keep her family together whilst latching onto her role as a the self-sacrificing ‘babushka’ to her errant children and her grandson Timur. The novel is set in the bleak post-soviet apartments of Moscow, and the atmosphere is tangibly impregnated with despair. Petrushevskaya’s work is beautifully written, undulating from torrid streams of consciousness to poetic reflection to neurotic panic. Petrushevskaya’s sharp wit and sardonic social commentary help lift the bleak narrative and create a truly unique and insightful perspective on the desperate nature of one family’s existence.

Tolstoy’s Anna Karenina is a novel that delights in contrasting diametric opposites, from Levin and Kitty’s marriage and Anna and Vronsky’s love affair to the spatial opposition of Moscow and Saint Petersburg. Moscow is full of glamorous balls, elegant fashions and handsome officers. Moscow is where Anna and Vronsky see one another for the first time, and Moscow is where the novel ends. The text is ambitious and labyrinthine, creating a rich mosaic of human emotion that defies judgement of human actions. However you feel about Tolstoy’s treatment of his heroine, he does an exceptional job of representing the minutiae of contradictory and complex motivations that govern human behaviour. 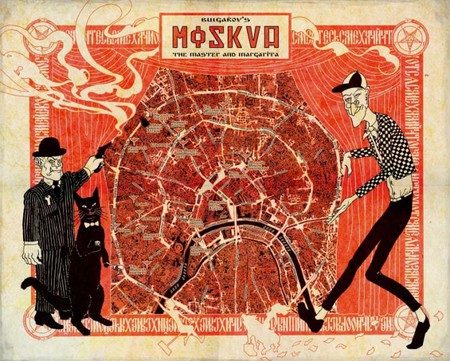 The Master and Margarita – Bulgakov

Bulgakov’s masterpiece reaches past the concrete reality of an identifiable Moscow to an evanescent world beyond it. The novel follows a series of inexplicable and utterly hilarious events that ensue when the Devil arrives in fervently atheistic soviet Russia. Bulgakov satirizes the materialistic nature of Muscovite society to gesture to the spiritual void beneath it. Characters include a motley demonic band of individuals, and a droll-humoured cigar-smoking cat, wreaking havoc around town in a series of wickedly funny skits. From a magic show featuring a temporary decapitation, to a magical scene in which the eponymous Margarita flies over Moscow on a broomstick completely naked, there is no end to Bulgakov’s incredible imagination. Those familiar with the opening scene will be delighted when they visit modern day Moscow’s Patriarch Ponds, where a cautionary sign will advise you that it is ‘forbidden to talk to strangers’.

Night Watch was translated into English after the phenomenal success of the films based on Lukyanenko’s pentology of novels. This novel is the first in the series, a gripping sci-fi fantasy that explores the supernatural underworld lurking just beneath the surface of our everyday world. Lukyanenko’s novel reflects a trend for fantastical or allegorical fiction which is currently prevalent in Russia. In Night Watch, a supernatural race of primeval humans must ally either with agents of Dark or Light. The main protagonist, Anton, finds himself caught in the middle of this tumultuous battle and drawn into a world of moral incertitude. This is (in the most non-cliché terms) a really griping page-turner.

This is a slight cheat, as the majority of the narrative takes place during a train journey between Moscow and Petushki, a suburban settlement that appropriates a utopian-like quality in the mind of Venichka, the drunken protagonist. There are many who believe that Erofeev’s work is untranslatable, replete as it is with cultural references to classical poems, the orthodox faith and slurred streams of consciousness. Nevertheless, we believe it would be a pity to miss out on insight into the darkly witty, tremendously sad and sparkling mind of Erofeev. His prose-poem allows us to be simultaneously privy to Venichka’s internal dialogue, the external dialogue of his accompanying passengers and to the author himself. Erofeev plays with all readerly expectations through Venichka, the proverbial holy fool who, through his tangled commentary on everything from Marx to Pushkin to vodka slowly unveils his authenticity as a character.

This is the third novel in the Investigator Renko series, following on from the incredibly popular Gorky Park and Polar Star. Red Square does not actually refer to the Moscow location but rather a missing avant-garde painting that recently resurfaced in the illegal black-markets of 1990’s Russia. Renko is shown as an individual awash in a sea of corruption, attempting to cling to the law in an atmosphere of rapid and unprecedented change. Red Square provides an in-depth insight into the emerging capitalism taking hold of Russia after the fall of the Soviet Union, its setting an interesting comparison of Russia and cultural trends in Munich and Berlin during this tumultuous period. As ever, Cruz Smith’s writing is engaging and darkly funny. 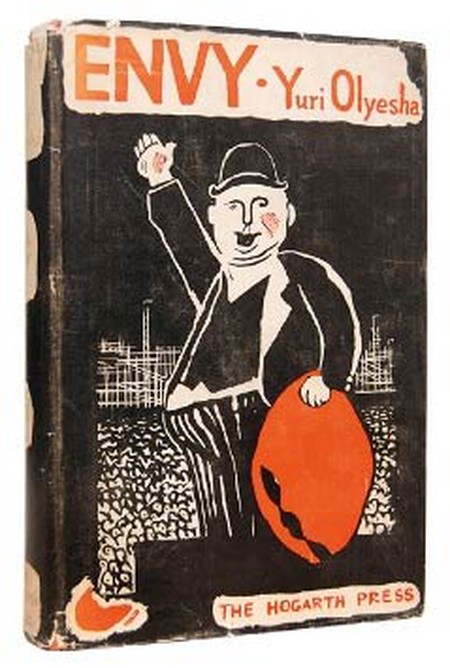 Olesha’s 1927 novel is a slapstick examination of the tussles between a smug sausage mogul and the drunken no-hope he chances upon in the gutter one day. If that’s not the kind of scenario to secure your interest then be assured that this is a much over-looked, brilliantly-rendered and vigorously delivered poetic feat. Although Olesha only wrote one book, it seems he put all his genius into it. As with Moscow-Petushki, Envy succeeds in being simultaneously lyrical and satirical; Olesha’s wry social commentary bubbles up from the pages with incredible energy. There are some fantastically disgusting descriptions that are utterly absurd and also oddly believable. This novel probably won’t suit every taste but if you have a penchant for the avant-garde then look no further.

This is a must-read for anyone with an interest in the Moscow metro system. The sprawling stations take on ideologies and statehoods of their own after a nuclear disaster above-ground forces survivors into a subterranean world where rifle cartridges are currency and men fight both against intangible threats and one another. Artyom, the young protagonist of the novel, has never experienced fresh air, seen grass or been exposed to natural light. His fellow inhabitants at VDNKh raise anaemic pigs on waste products and grow mushrooms for food, eking out a precarious existence in a post-apocalyptic wasteland. After meeting an enigmatic figure called Hunter, Artyom takes on an epic quest to reach the mythical city of Polis, navigating the various perils that ensue as he traverses the claustrophobic, cramped conditions of life in the metro. Metro 2033 is ultimately a study of the human psyche and man’s irrepressible desire to survive no matter what that means. With this comes a bleak insight into the moral and physical degradation of people when they are pushed to their absolute limits.