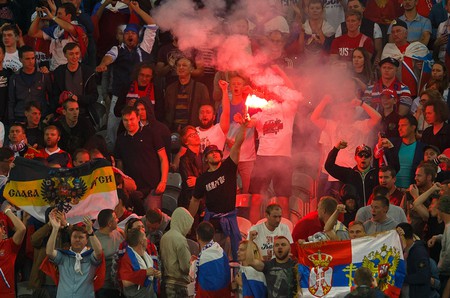 On the day Russia was confirmed as the host of the 2018 World Cup, the news flew (relatively) under the radar because it was part of the same announcement that saw Qatar named as the 2022 host. The immediate response was a combination of outrage and disillusionment, while many were not in the least bit surprised by how brazenly FIFA were grabbing as much money as possible without a single moment’s thought towards aspects as trivial as say, human rights, for example.

Qatar, of course, stole the headlines. The state’s use of slave labor, its dubious human rights record, and its total lack of stadia or footballing history were all set aside because of the money it has been filling FIFA executive pockets with (all outlined superbly by journalist Philippe Auclair in a number of different publications since the announcement). Particular lowlights include the revelation that ‘two members of the FIFA executive-committee, Jacques Anouma and Issa Hayatou, had received over $2 million from Qatar in exchange for their support’ or when ‘the Crown Prince of Qatar, Sheikh Tamim made a discreet visit to Paris, where he met French president Nicolas Sarkozy and then-UEFA president and FIFA vice president Michel Platini, who was made to understand that a vote for Qatar would also be a vote for the greater interests of France, which was actively seeking Qatari investment.’

While saying Russia’s bid has more legitimacy than Qatar’s is accurate, both are morally questionable.The news that migrant workers were building Qatar’s stadia in awful conditions for pittance, while their passports were confiscated, is akin to 21st-century slavery. Workers are paid less than $50 per week in a country that has the single highest capita per GDP in the world. They are not allowed to leave their job and, obviously can’t even leave the country. 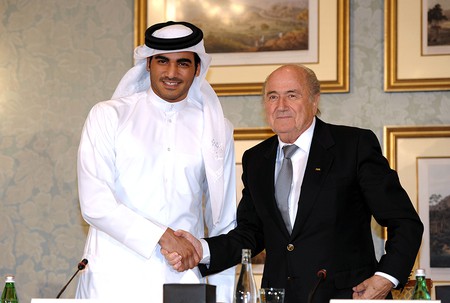 For Qatar 2022, read Russia 2018. In particular, the St. Petersburg Stadium has come under fire, and for good reason. A recent investigation in The Guardian detailed: ‘Tens of thousands of North Korean labourers in Russia work in often ‘slave-like conditions’, according to Marzuki Darusman, the United Nations special rapporteur on human rights in the Democratic People’s Republic of Korea. The companies that hire them “become complicit in an unacceptable system of forced labour”.’ A number of workers have died on-site in order to build these facilities and to line the pockets of the few. According to a subcontractor in St. Petersburg, ‘North Koreans at the site worked at least 11 hours a day for $10–15, seven days a week. They not only earned less than other migrant workers but lived in more cramped conditions, six to eight workers sharing one construction caravan.’

Russia will host the 2017 Confederations Cup beginning June 17, the traditional soft launch tournament that precedes each World Cup. Four of the 12 World Cup venues will be on show, including St. Petersburg (finished for 43 billion rubles, well over four times the original budgeted price). The likes of Russia, Germany, Chile and Portugal will play in the eight-team tournament over two weeks. Putting aside the human rights violations, that bribery won the vote, or the fact that the St. Petersburg pitch is legally unfit for purpose and authorities are desperately trying to fix the problem, there is still the ugly issue of hooliganism.

Euro 2016 in France saw a new wave of organized hooliganism from Russian fans, running through streets, attacking opposing fans and locals alike, all the while filming and sharing and social media. While the official rhetoric is that the country will do everything it can to ensure that the tournament is as safe as possible for visiting fans, there have been some questionable views voiced by certain government officials.

In March 2017, a member of the opposition Liberal Democratic Party, Igor Lebedev, drew up the rules for a new sport, named after the Russian word for ‘fight’, draka. The proposal can be read on the party’s official site; it explains: ‘Russia would be a pioneer in a new sport. Fans arrive, for example, and start picking fights. And they get the answer – challenge accepted. A meeting in a stadium at a set time.’ 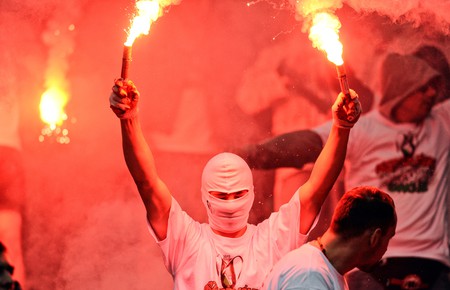 After the repeated incidents of fighting by Russians in France last summer, Lebedev, was is on the board of the Russian Football Union, was very vocal in supporting their actions. He tweeted, ‘I don’t see anything wrong with the fans fighting. Quite the opposite, well done lads, keep it up!’ – an astonishingly worrying opinion that was supported by a spokesperson for the Russian Investigative Committee, who said, ‘French police were more used to policing Gay Pride and couldn’t handle “real men”.’

A year out from the tournament, Russia still has plenty to answer. Critics still hold on to the notion that Qatar 2022 can be rearranged and given to a different host at relative short notice; there are enough nations with the infrastructure and fan base in place to do so. That said, FIFA will do everything within their power to ensure the state holds onto it, and it looks increasingly likely that Qatar will remain the host.

There is even less chance of Russia relinquishing control. Just like the 2014 Sochi Olympics, Vladimir Putin sees the World Cup as an excellent propaganda tool. If workers dying isn’t enough to stop these tournaments going ahead, there’s a sense that nothing will. Fans will head to Russia next year with great trepidation, but they will still go. The continuous revelations about the way in which the tournament bid was won, as well as what has happened since, will not stop people buying tickets.

The regrettable truth is that, post tournament, people will remember the games, and not what happened beforehand.