The Russian Couple Who Makes Baroque Wigs Out of Paper 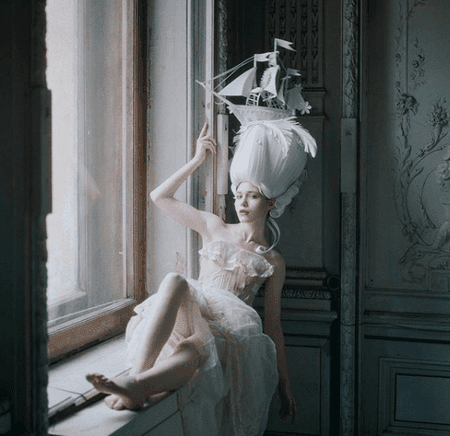 For those who think the pinnacle of paper-based craft is an origami crane, think again. The elaborately crafted works by wife and husband duo Asya Kozina and Dmitriy Kozin are delicate masterpieces that transcend the usual expectations of crafting. Through intricate handiwork, the St. Petersburg-based artists carve detailed baroque sculptures out of crisp, white paper. And most of these artworks happen to be wearable, too.

It may seem a little incongruous to create wearable sculptures out of paper, but the tension between the work’s fragility and wearability is much of the appeal. And it appears Asya thinks so, too. The artist has been making wigs, costumes and objects out of the material since she was a little girl.

Around the age of ten, Asya fell sick and was put on doctor-prescribed bed rest. Asya’s mother, a fine arts teacher, needed to find a suitable activity to busy her bored and sick child, and so, she began to teach her daughter the basics of paper cutting. This enabled Asya to create a collection of fairy-tale characters while she was sick, and it hooked her on crafting before she hit her teenage years.

Her first solo exhibition was held in 2007 in Ukraine, where she showcased a series of about 30 miniature headdresses. This exhibition toured the country, and from there, Asya continued to experiment with cutting techniques and nurture her love of working with paper, which she sees as a medium that offers plenty of creative possibilities:

‘Working with paper is a search for opportunities of interesting artistic expression […]. All we [have] is one goal, [and that is] to make the most expressive and beautiful work.’

The creative partnership between Asya and her husband, Dmitriy, didn’t start until 2012 when his experience in monumental sculpture was called upon for a project involving immense horse sculptures. Although many people would baulk at the idea of working with their partner, the couple soon realised they worked better as a team. With complementary artistic skill sets, together they could aspire to more ambitious projects. Shortly after their meeting of minds, the duo went on to create a collection of ornamental wedding dresses that were based on traditional wedding outfits for a lingerie campaign.

The headpieces, costumes and objects that Asya and Dmitriy create are largely inspired by the Baroque period of the 17th and 18th centuries. Both artists find the era’s expressiveness and emotiveness appealing. For Asya, the appeal is very much visual – she is taken by the geometry in the era’s form. For Dmitriy, however, the allure is less about shape and more about the period’s highly emotive aesthetic, which he finds to be creatively fruitful:

‘I think that this [the Baroque] era [contrasts] with our time […]. It is very sensual and irrational. […] The Baroque era is so rich, that the efforts of the artist easily bring a harvest.’

It may come as little surprise to learn that these wigs are meticulously planned before a knife is put to paper. Ideas are brainstormed, then sketched out, and then materials are sourced. In these early stages of the creative process, Aysa believes her partnership is beneficial, because of the difference in how she and her husband work:

‘When I develop an idea, it is most often based on the historical past of the costumes […]. Dmitriy comes up with projects that are more conceptual, more modern, and in this sense, he always correctly directs my ideas and gives them the right [trajectory].’

Once the concept is fully planned out, the sculptures are usually carved with knives, though scissors are used on bigger projects. Glue is the main adhesive; however, metal frames and wooden beams are sometimes used to support oversized sculptures. The final stage of the process is the photo shoot, once the sculpture is assembled.

Despite all the planning, sometimes the finished work strays from the original concept and plan. Still, for Dmitriy, the final photo shoot is the opportunity to bask in their efforts. Of the finished product, Asya says:

‘Certainly, some things may not be as you expected, but in general, [the] finale is [a] delight. Experiencing the finished work is the greatest pleasure.’