The Reason Why There's Orange Snow in Eastern Europe 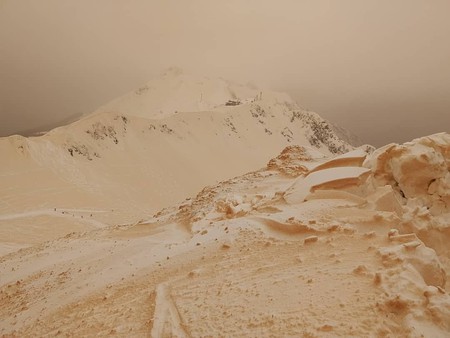 This season, skiers were delighted not only by favourable weather conditions during the whole of March, but also by an unusual snow colour. It may seem like an over-saturated Instagram filter, but the slopes are indeed orange. Apparently, a huge sand storm from the Sahara Desert sent a mix of sand and rain across the territory of Eastern Europe, adding an orange hue to slopes in Russia, Romania, Ukraine and Moldova in particular.

According to meteorologists, such a phenomenon occurs roughly once every five years. However, this time it has exceeded any expectations and made snow look like an extraterrestrial landscape. The largest view of tinted mountain peaks was spotted in the Rosa Khutor Alpine Resort near Sochi, Russia. The storm was so heavy that some tourists even complained of sand in their mouths.

Fans of snowboarding should not be upset or surprised about the situation. There exists another kind of sport called sandboarding when riders slide down sandy dunes. The techniques are the same, but the destinations are the deserts in Arabia.