The Best Cafés in Kaliningrad 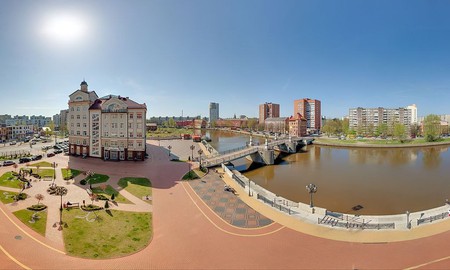 Kaliningrad is a perfect city for long strolls. Immanuel Kant, one of the most important philosophers of all time and certainly the most prominent character to have ever lived there, knew it very well. His daily walks, taken every day at the exact same time, are now legendary, and with long walks come coffee and cake breaks. While it is difficult to establish Kant’s favourite caffeine-recharge spots, Culture Trip has put together a list of some of the city’s best contemporary cafés.

Cafe, Russian, $$$
Facebook
Email
Twitter
Pinterest
Copy link
Share
Map View
Croissant Cafe is a chain found all over the city. They serve a wide selection of teas and coffees, pastries and cakes, as well as breakfast and lunch. It’s a perfect place to grab a quick snack on the way from one museum to another or to warm up on a cold autumn afternoon. Veggie options are available.

Located across the river from the Konigsberg Cathedral, Coffee Lounge is an excellent place for a cup of coffee with a beautiful view. The café is open late; therefore, you can observe the city during the day and at night from there. On sunny days, a terrace opens up, making it a lovely spot for a quiet evening over a glass of wine.

Cafe, European, $$$
Facebook
Email
Twitter
Pinterest
Copy link
Share
Kofeinik is a homely place slightly away from the city centre, away from the tourist area. It’s a good spot for a delicious cup of joe with the locals. The café offers a wide selection of coffees prepared in a variety of ways, served by coffee experts: this is where gastro-tourism ends and gastro-travelling begins.
Open In Google Maps
87 Sovetskyi prospekt, Kaliningrad, Russia
Give us feedback

Russia is the home of a wonderfully revolutionary idea: anti-cafés, or those establishments where the guest doesn’t pay for the biscuits and beverages consumed but for the amount of time they spend there. At their very core, anti-cafés are also hubs of social interaction; any group can join, and there are always board games and cultural events available. While the movement began in Moscow, cities all over the country now have at least one anti-café. Kaliningrad is no exception. When in town, pop by Sukhomyatka, where you can have a coffee, chat to the locals and play the guitar. If you’re lucky, you’ll stumble upon a concert or a lecture. There is no better way to spend an afternoon. Pay close attention to the plaques, as anti-cafés, just like hostels, are sometimes difficult to find.

A city can never have too many anti-cafés, as each one is unique, with their quirks and specialities. Kaliningrad has one more: anti-café Labirynt, located a bit further away from the city centre. Come here in the evening to enjoy one of the frequent parties, smoke some shisha and play some video games.

Something for Friends fans: a replica of the TV show’s Central Perk right in the heart of Kaliningrad. Faithful to its original in terms of interior design, the place serves delicious coffee as well. This café is an example of one of the unexpected quirks for which Russia is known. It’s certainly a place worth visiting.

As a place to satisfy the sweetest of sweet teeth, TastyLab offers an array of macarons, éclairs and cupcakes in colourful and delicious flavours. It’s a great spot for a snack break on long winter evenings.