The 10 Most Beautiful Stops on the Trans-Siberian Railway

To travel the Trans-Siberian Railway is a dream, lurking in the back of the minds of many of us. It is the longest railway line in the world, consisting of 9,288 kilometers, spanning 7 time zones and taking up a week to reach your final destination. This guide suggests the best stops to visit and the most beautiful things to see during your journey on the Trans-Siberian Railway. It is your choice either to see the picturesque mountains from the train compartment, or go out into wild Siberia and explore its unique and hospitable cities and towns. 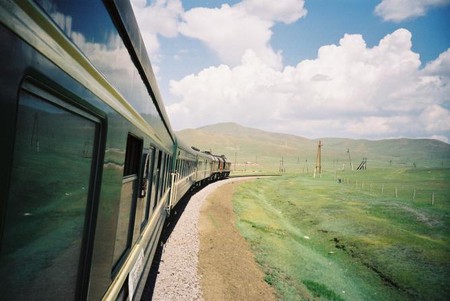 It is recommended that you begin your Trans-Siberian Rail journey in the magnificent and splendid city on the Neva river. The most beautiful city in Russia is full of romantic ambiance, bridges, museum-like streets and imperial spirit. Russian’s northern capital has an unparalleled cultural history that will be of interest to genuine lovers of all things classical: theatre, ballet and opera. Even a week spent at an offbeat rapid pace will not be enough to cover the tip of city’s cultural heritage iceberg. Buildings and monuments of great historical importance wait to be explored and discovered, including St. Isaac’s Cathedral, the Paul and Peter Fortress and Nevsky Prospekt; national museums present the greatest works of Russian and European painters, concentrated in the State Hermitage Museum and the Erarta Gallery; whereas incredibly detailed and passionate theatre and opera performances must be experienced at the Mariinsky Theater. St Petersburg will please fans of traditional sightseeing and historic cultural heritage, and will surprise those looking for an alternative side to the city, where secret hangout spots ofPetersburg’s youth and local citizens will open at a glance. To explore just the most famous attractions, it may take you several weeks.

Yaroslavl is the oldest city on the Volga, and was founded in 1010. The historic city center, has been named one of 24 UNESCO World Heritage sites in Russia. The construction of the city, which reached its peak during the 17th and 18th centuries, is an outstanding example of the mixture of cultural and architectural influences of Western Europe on Russia. Yaroslavl is the city that will captivate your eyesight, even with its minor details, such as an inconspicuous tile or a painted house board, hidden behind the luxurious façades. Religious establishments encompass the main points of interest in Yaroslavl, including the old Transfiguration Cathedral of the Savior Monastery, built between 1506-1516; the Church of Elijah the Prophet, with extraordinarily beautiful forms of this simple but solemn temple with two white domes; the massive Church of St. John the Baptist, the masterpiece of the Yaroslavl architecture of the 17th century, with fantastic silhouettes of its 15 chapters and a rich interior with an abundance of tiles, brick patterns and murals.

Yekaterinburg and the Ural Mountains

Founded by Peter the Great, Yekaterinburg is known as the Great Divide of the Urals. The Ural Mountains form a natural border between Europe and Asia, so the cultural and architectural influences of European and Asian civilizations have merged together in this fascinating and cosmopolitan landscape. Until the collapse of the USSR in 1991, Yekaterinburg was a secret and closed city to foreigners, due to the presence of the USSR’s defense industry. Now Yekaterinburg is totally different in its vibe, bustle and residents from cosmopolitan giants like Moscow and St Petersburg, and here you will be able to experience a more genuine Russia, with the city’s many pre-Soviet buildings being of great interest.

Being one of Russia’s largest cities, Kazan is an important industrial and cultural center which lies at the confluence of the Volga and Kazanka rivers in central Russia. Kazan is interesting and unique as it has been the capital city and cultural hub for the Volga Tatars. Kazan has carefully preserved the vibe of an authentic Russian province, but its architectural appearance has undergone some dramatic changes over the past decade. In this city, freedom, pithiness, tradition and modern influences have intertwined in a perfect symbiosis. The definite highlight of the city is the Kazan Kremlin Fortress, a UNESCO World Heritage Site with an incredible mosque and a perfect onion-domed cathedral.

Krasnoyarsk is located on the banks of the Yenisei River and is surrounded by picturesque mountains to both the south and north of the city. Although, Krasnoyarsk may not have sights that would be historically and culturally important for the whole of Russia, the city provides a mild climate and is constantly welcoming to new guests. To the south of Krasnoyarsk is Mount Karaulnaya, which offers an incredible view over the flat lands and the city itself. An unmissable highlight of stopping in the area will be a visit to the unique national park with a number of volcanic pillars named Zapovednik, or the ‘Stolby’ Nature Reserve, a popular destination for rock climbing enthusiasts. Day or night hiking trips alongside the signed and well-maintained trails will reward you with some spectacular views awaiting you on top of the pillars.

Lake Baikal is the biggest, deepest and most diverse lake on Earth. The region offers a similarly diverse range of opportunities for holiday makers, including living in small wooden houses with little convenience and amenities, sitting on the shore of the Lake Baikal in a deck chair and fishing, sampling delicious Baikal omul fish and posy, going dog sledding and visiting thermal saunas in winter, and watching nerpas swimming in their natural habitat. Few natural sights can surpass the beauty and grandeur of Lake Baikal, and the pure clear water of the lake call people to plunge into its waters.The area surrounding the lake is unique, and many of its plants and animals exist only here.

Ulan-Ude is a unique Siberian town. It has the world’s largest bust of Lenin, and also the title of the center of Russian Buddhism. The city is home to the large population of the Buryat people, who are friendly, welcoming, and caring, and city’s cultural diversity will make you surprised about its wonderful heterogeneity. An unspoken symbol of Ulan-Ude is the Ivolginsky Datsan, a Buddhist monastery located 35 kilometers outs of the city on a plain ground with a backdrop of picturesque mountains. Datsan symbolizes the re-emergence of Buddhism in this Asian part of Russia after the collapse of the Soviet Union. The Dalai Lama himself has paid a visit five times since his first tour in 1992.

Mongolia can be visited via the third primary route called the Trans-Mongolian Railway. Visiting Mongolia is very popular among travellers who decide to embark on the Trans-Siberian Railway voyage because of its untouched nature, vast steppes, stunning deserts, livestock freely walking around, nomadic culture and hospitable people. A few must-visit spots in Mongolia include: the empty steppe of the Gobi Desert, the Gandan Monastery, Mongolia’s most important Buddhist monastery, the monument to Genghis Khan at the Sukhbaatar Square, and the Gorkhi-Terelj National Park. Gorkhi-Terelj National Park offers you the beautiful scenery of wild and unspoiled Mongolia, and is where you can go inside the traditional Ger and meet a nomadic family, or even try to ride a horse, which is a routine part of Mongolian life.

Reached if travelling via the secondary route on Trans-Manchurian Railway, Beijing is the modern capital of China, as well as an ancient city with a completely unique culture, language, food and pace of life. Before entering Beijing, the train passes a dozen almost identical steppes and a few picturesque and industrially important Chinese cities, including Harbin, Changchun and Shanhaiguan, where you will be able to see the UNESCO World Heritage sight, the Great Wall of China, as well as take some stunning photos from the window of your train compartment. 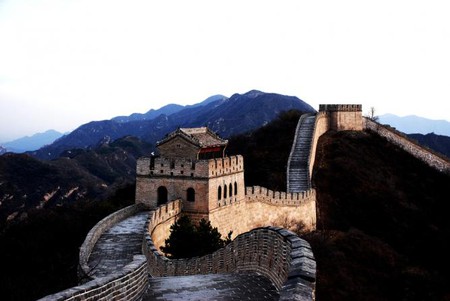 Vladivostok is the final destination of the 9,288 kilometers Trans-Siberian Railway route. The port city will welcome you with its renowned and impressive white-washed central rail station. Vladivostok is a military port, home to the Russian Pacific Fleet, located on the western shores of the Japanese Sea. Vladivostok is captivating, with its genuine mix of different cultures: the Russian language, Japanese cars, and Asian cuisine. Start your discovery of Vladivostok by overlooking this charming port city from its waterfront promenade: huge ships, containers with foreign goods, and the sea air create a romantic mood. To cover the whole city at a glance, ride on the funicular railway, and definitely go beyond the city to the untouched and remote parts of the Primorye region, including Khasan, Olginsky and Khanka districts, which offer an endless sea, fresh and unpolluted air and elegant nature. 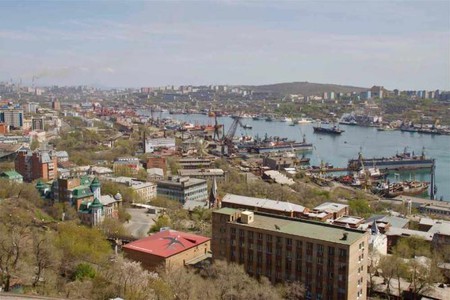 The Route of the Trans-Siberian Railway 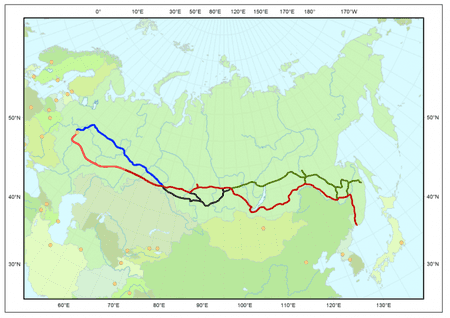