The 10 Best Places for Panoramic Views of Moscow 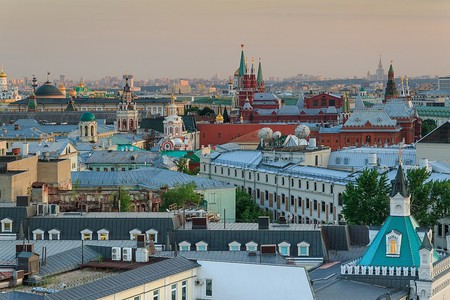 View from the observation deck at the Central Children’s Store| © A.Savin/Wikimedia Commons

The city on seven hills, Moscow is quite a view from above. No matter how much you walk around Russia’s capital, no Moscow experience is ever complete without a visit to one of the city’s observation decks. From Michelin-star restaurants, to 16th-century bell-towers – here are Moscow’s best places with panoramic views.

Located on the 16th floor of the Smolensky Passage shopping mall, White Rabbit is a restaurant with Michelin-star winning menu and breathtaking views. Discover the latest food trends, while enjoying fantastic views of the Kremlin walls, Cathedral of Christ the Saviour, and two of the seven Stalinist skyscrapers – Hotel Ukraine and Ministry of Foreign Affairs.

Moscow’s main children’s store, which opened in 2015 after a six-year-long overhaul, added an observation deck to the many attractions it houses. Divided into two zones, that overlook Lubyanka and the Kremlin respectively, the observation deck is equipped with telescopes and glass fences.

For spectacular 360-degree panoramic views of Moscow, stop at the City Space bar. Located on the 34th-floor of the Swissotel Krasnye Holmy, City Space is one of Moscow’s most romantic places where food is great and panoramas are stunning.

Built in 1508, the Ivan Velikiy Bell tower had been Moscow’s tallest construction up until the 17th-century. To marvel at the views from the height of 25 meters, you’ll need to climb 137 steps, which might be quite challenging. The observation deck is open from April to October. Children under 12 are not allowed there, even when accompanied by adults. 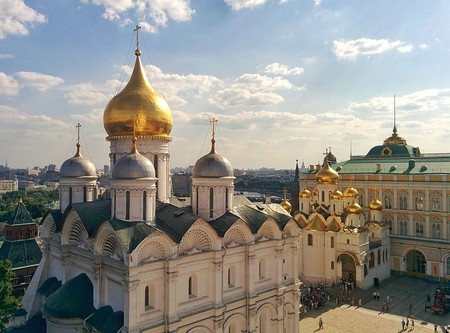 One of the most famous panoramic bars in Russia’s capital, Time Out occupies the 12th and 13th floors of Peking Hotel Moscow. Apart from its glorious location, the bar is known for its unconventional cocktails, featuring a very eclectic combination of cold stock and vodka.

Cathedral of Christ the Saviour

Built in 2004, Patriarchy Bridge commands the magnificent vistas of the Kremlin, Moskva river embankments, the island of Red October, the Peter the Great statue and the Cathedral of Christ the Saviour. The latter, in its turn, has four observation decks of its own, set 40 meters between the cathedral bell towers, 40 meters above the ground. Available only as part of a guided tour, they offer amazing views on Gorky park, Krymsky bridge, Poklonnaya tower and Kotelnicheskaya embankment building.

The highest altitude restaurant in Europe, Sixty is the pinnacle of Moscow’s panoramic places. Located on the 62th floor of the Federation Tower of the Moscow International Business Center, this place seems to have it all: head-spinning views, great food and vibrant atmosphere.

Another panoramic place of the Moscow city, this observation deck draws crowds looking for futuristic views. Here you can take a closer look at the skyscrapers of the Moscow International Business Center and enjoy the views of the Moscow State University, Ostankino Tower, Moscow’s White House and Cathedral of Christ the Saviour. 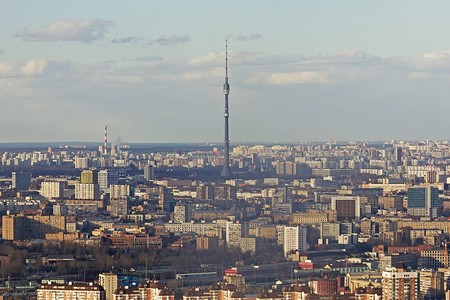 Opened in 1953, Moscow’s most famous observation deck is on every first-time visitor’s must-see list. Here you can spot almost every important landmark in the city: from all the seven Stalinist skyscrapers, to Ostankino tower, and Peter the Great statue – now you can take a closer look at each of them using free binoculars.

Completed in 1967, Ostankino Television Tower was the world’s highest building at the time of construction. The 540-meter-tall tower features two observation decks: the open-air one, which is open from May to October and the one with glass walls, which you can visit all year round. 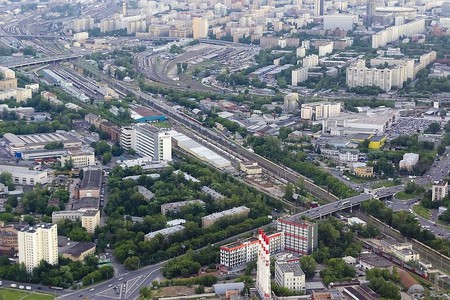 Moscow: view from the observation deck at Ostankino Tower | © MrStepanovka/Wikimedia Commons
Give us feedback