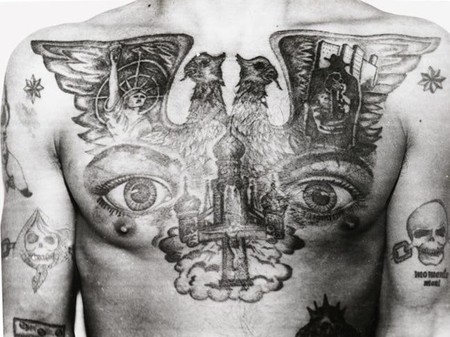 Soviet prison tattoos hid a rich and elaborate visual language, revealing everything from an inmate’s rank to their conviction. A study of prisoners’ body art revealed cryptic symbols, recurring motifs, and unwritten laws known only to those on the inside. In his book Russian Criminal Police Files, Arkady Bronnikov unveils the secret meaning behind Soviet-era prison tattoos.

During his tenure as a senior expert in criminalistics at the USSR Ministry of Internal Affairs, Arkady Bronnikov documented the tattoos of prisoners. For 20 years, Bronnikov travelled across the Ural region uncovering the codified language of Soviet prison tattoos. The results of his study can be found in his published work Russian Criminal Police Files Vol 1.

According to the unwritten law between prisoners, everyone had to have tattoos. The only inmates who were permitted to have clean skin were those on the inside for political crimes. At the time of Bronnikov’s study, the Soviet penal code had a ban on tattoos but, despite this, an estimated 70-98 percent of the 35,000,000 incarcerated felons were inked. 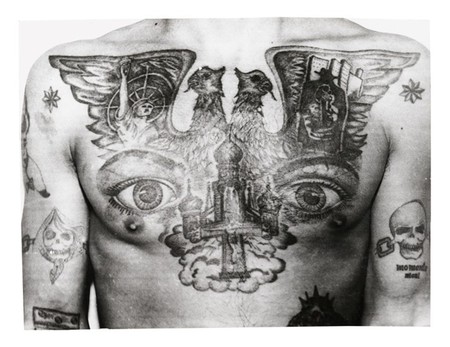 Tattoos were part of an elaborate and cryptic language among prisoners. Those without ink were looked down upon and made outcasts, which opened them up to confrontation. Misleading tattoos were also severely punished, sometimes by death. 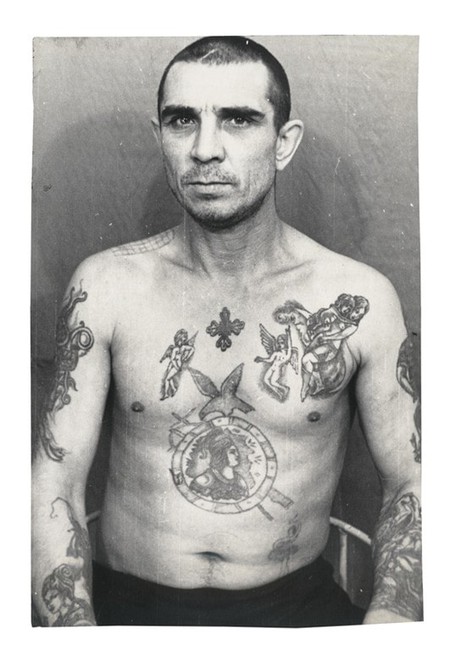 The language of Soviet prison tattoos was almost poetic. Full of symbolism, the markings would reveal elements of an inmate’s character, personal disposition and, crucially, the reason they were convicted.

Murderers branded themselves with skulls, daggers and other such morose imagery. Another frequently recurring motif was a pair of eyes, suggesting that the owner of the tattoo was ‘watching over other inmates.’ Such tattoos were worn by high-ranking felons who oversaw criminal activities. 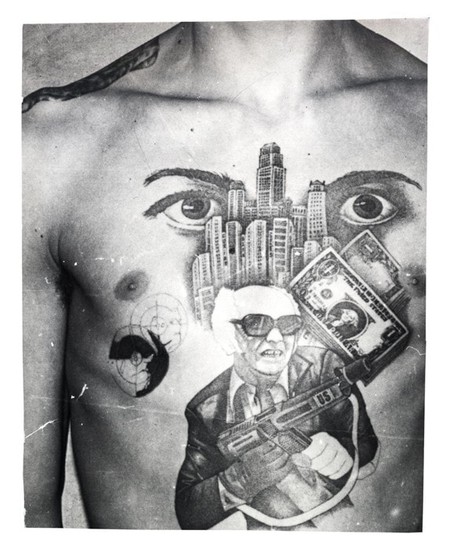 Some tattoos gave prisoners a social advantage, denoting their rank within the prison system. For example, professional criminals (mainly mafiosos) often formed the upper tier of the prison hierarchy and were known as the ringleaders. Their status was conveyed by a pair of eight-pointed stars just under the collarbone, as shown on the prisoner below. 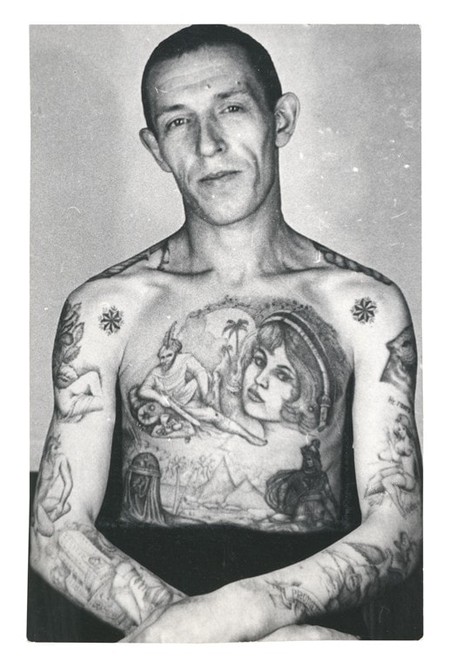 Below the ringleaders were the soldiers or enforcers, used by the ringleaders as muscle. Soldiers followed orders and carried out retribution. They conveyed their strength and fighting prowess through tattoos depicting battle scenes and warriors with armor on their chests. 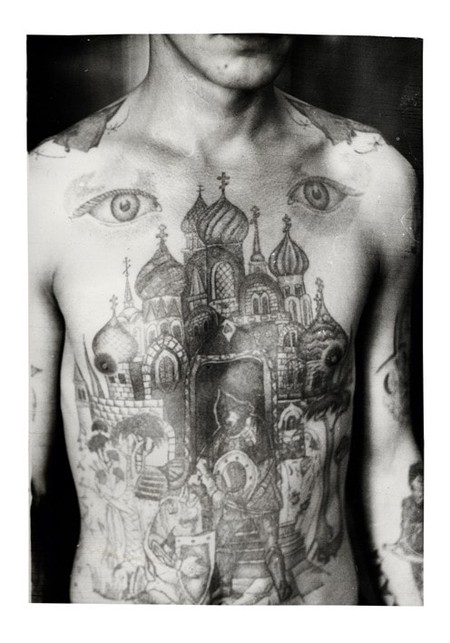 Under the enforcers were the hard labourers. These inmates stood up for themselves. They often wore knee tattoos, showing that they would not be brought to their knees.

Outcasts were the lowest tier of the hierarchy. At the time of the study, they made up roughly a quarter of the prison population. They were prisoners who had been defiled on the inside, or criminals who had been convicted of rape or molestation. These felons were made outcasts and were vulnerable to violent punishment by other inmates.

Perpetrators of sex crimes found themselves in a conundrum when entering the prison system. They had to decide whether they would violate prison law and bear no tattoos or risk punishment by death by inking a misleading tattoo. A mermaid’s tail, seen under the prisoner’s belly button below, indicates a sex crime against a minor. 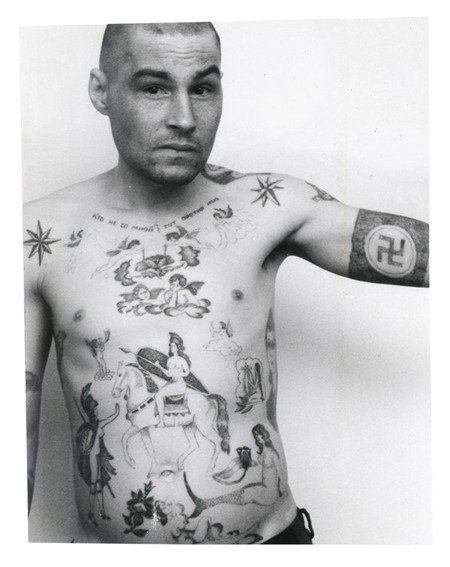 How tattoos were inked on the inside

Tattoos were usually made by the prisoners themselves. For eyelid tattoos, teaspoons were placed under the lid. Some of the more detailed tattoos could take years to complete. They were often made with a makeshift needle from a modified shaver, while the ink was created from burnt rubber and urine. Hygiene was poor, and inmates risked infection and disease. Lymphadenitis (inflammation of the lymph nodes) was common, as were gangrene and tetanus. 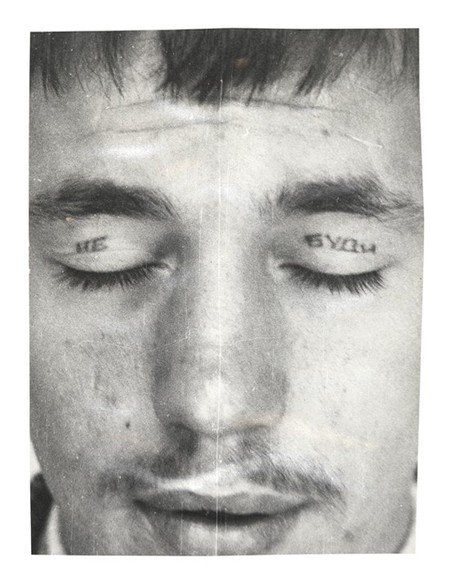 Ring tattoos were the most common, as they were visible at all times. Each one stood for an individual conviction, and so the number of ring tattoos correlated to the number of convictions. A black-and-white diamond indicated that the prisoner had pleaded not guilty, while a skull or a pirate suggested murder. A domino with six dots on the knuckle indicated ‘a man who had been broken while in prison, and should not be feared.’

Prisoners who had been involved with drugs – whether as users, pushers or makers – conveyed their trade through literal and figurative symbols. These prisoners bore tattoos of needles, poppies, and insects caught in spiders’ webs. The imagery of trapped insects suggested that the prisoner was ‘mixed up in drugs like a beetle in manure and [will] never get out.’

Lenin and Stalin heads were also common symbols. If they were accompanied by the letters вор, it indicated that the inmate was a ‘thief in law’ (a professional criminal who held an elite position within organised crime). Lenin and Stalin tattoos also represented patriotic feelings. Furthermore, it was a common belief among prisoners that it was sacrilege for guards to shoot at images of esteemed leaders, so inmates tattooed them on their chests as protection against their keepers. 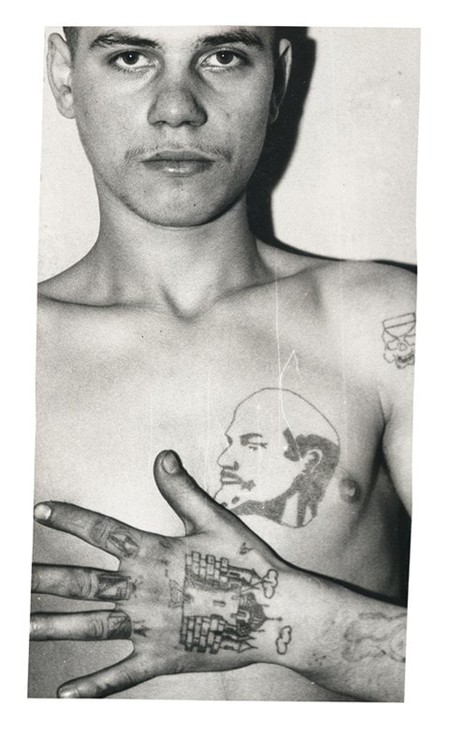