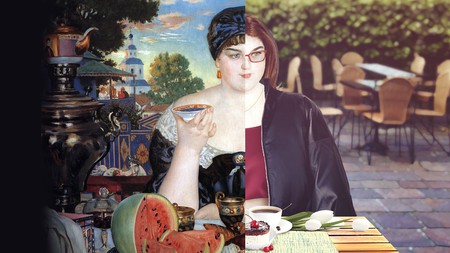 The Moscow based video designer behind the project #НашОтветМонеЛизе (Our Answer To Mona Lisa) is on a mission to bust “the grass is always greener” myth, by introducing to her followers the most beautiful women in Russian art in a most unusual fashion. Alena transforms classic female portraits by Russian artists into Instagram celebrities, giving them a knockout makeover and a brand new backstory. Determined to show the artistry of Russian painters and timeless beauty of their muses, Alena, together with a group of life coaches, psychologists and style consultants ponders the life these ladies would live today.⠀⠀

Portrait of an Unknown Woman in Russian Costume, Ivan Argunov (1784)

Ivan Argunov, serf artist of count Pyotr Borisovich Sheremetev, mostly created portraits of Russian nobility. At the time he was working making a peasant woman the subject of his artwork was a very bold move that started a new trend in Russian art.

In her Instagram makeover, the lady looks as if she would have a vibrant personality and analytical mind – a woman who gets things done and would make a good photographer or designer.

One of the best-known works by Vladimir Borovikovsky is the portrait of Maria Ivanovna Lopukhina, nee countess Tolstaya. Commissioned in 1897 by her husband-to-be, Stepan Lopukhin, the painting was created before Maria’s wedding. Unfortunately, the 18-year-old charmer in the picture was not particularly happy in that marriage and six years later died of tuberculosis.

In today’s world, charismatic Maria would be an Instagram celebrity with a million followers.

Pimen Orlov was a self-taught artist who later learned from wandering house painters. His persistence got him an apprentice position with Karl Bryullov.⠀

Today the girl in the portrait would likely be a journalist or TV reporter – just by the look in her eyes one can tell that no one can stop her from getting what she wants.

Known as the “sun of Russian poetry”, Aleksandr Pushkin wanted Karl Bryullov to paint the portrait of his lovely young wife – in the end, he refused. Instead, his older brother Alexander volunteered to do the job and perfectly captured Natalia’s innocent beauty.

In 2017 Natalia Goncharova would be an actress, who travels the world collecting new experiences. Despite the crowd of admirers chasing after her, Natalia would never rush into marriage. Preferring to enjoy her single lifestyle, filled with art, acting and trips to foreign countries.

Created in 1918 by Boris Kustodiev, this corpulent beauty was never a merchant’s wife but an actual Baroness. Not the first noble lady to sit for the artist, Baroness Galina Vladimirovna Aderkas was Kustodiev’s neighbour in Astrakhan and came from a family of great antiquity. At the time of the painting she was a first-year medical student and looked much younger and slimmer in real life.

In today’s world, Galina Aderkas would be an influential magazine editor and certified fashionista, who knows how to accessorize and blogs about it. She would spend her days meeting her friends at cafes – never passing up the opportunity for dessert.

This portrait of Maria Beck nee Stolypin is painted by famous Russian artist Karl Bryullov. Born into a noble family, Maria was related to many prominent people of that time: a daughter of senator Arkady Stolypin and grand-daughter of admiral Nikolay Mordvinov, she was also related to poet Mikhail Lermontov. Stolypin’s house was frequented by writers and political figures, including Nikolay Karamzin, reformist Mikhail Speransky, a leader of the Decembrist Revolt, Kondraty Ryleev⠀

The Instagram makeover turned Maria Stolypin into an It girl. She would definitely have received a spectacular education, but wouldn’t settle for a tedious office job. Transformed Maria looks like someone who’s living in the moment, travelling and partying, but would be happy to settle down, when the right person came along.

At the turn of the 19th century, Russia’s higher society became concerned about the life of peasant class, that’s why there are so many portraits of peasants from that period.

Both before and after transformation, this lady looks charming, energetic and smart. Today she would likely be a young creative, enthusiastically working her way up.