Nikolai Gogol, the Ukrainian-born writer is known as one of Russia’s greatest authors. Works like The Overcoat and Dead Souls launched Gogol into the upper echelons of Russian writers, yet his greatest masterpiece, a continuation of Dead Souls, was cut short by his tragic death. 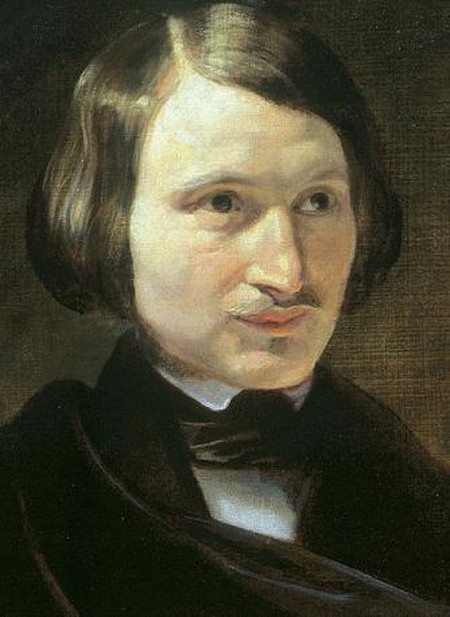 Nikolai Gogol, the Ukrainian godfather of Russian literature. Considered a leading figure in Russian literary realism, a title and movement he rejected, hailed by Vladimir Nabokov as the greatest writer Russia has ever produced, he has influenced the writings of generations of Russian writers from Fyodor Dostoyevsky to Mikhail Bulgakov. One of literatures great contradictions, Gogol is a Ukrainian hailed a Great Russian, a celebrated Realist who wrote surrealist masterpieces. In fact the life of Gogol reads like one of his stories. A writer celebrated for founding a movement he wants no part of sets out to write a piece rivaling Dante’s The Divine Comedy or Homer’s The Odyssey, only to die before its completion. If as critics suggest The Overcoat symbolizes Gogol’s literary genius then Dead Souls has become the symbol of the author’s descent into madness. Representing perhaps an Icarus moment where life imitates art, does Gogol’s notorious masterpiece really define one of literatures true originals, or is it an extreme case of the ‘tortured artist’ romanticized?

Nikolai Vasilievich Gogol was born into Ukrainian gentry in 1809. Unpopular among his peers, riddled with a crippling self-consciousness, a young Gogol sought solace in the world of amateur theatre inhabited by his father. For a while Gogol entertained ideas of a life on the stage, but by the time he arrived in St. Petersburg in 1828 it was literary fame he craved. After a disastrous first attempt at greatness, a poem published at his own expense under a pseudonym, titled Hans Kuchelgarten, Gogol’s Evenings On A Farm Near Dikanka (1831) saw critics hailing an emerging Ukrainian writer. A second volume proved equally popular, yet despite the success an unsatisfied Gogol set out to establish himself as a history scholar. Inexperienced and unqualified, Gogol’s time as Professor Of Medieval History at the University of St. Petersburg was a shambles, and he resigned within a year. Restless and seeking a different form of expression Gogol set out to take his work in a new direction. 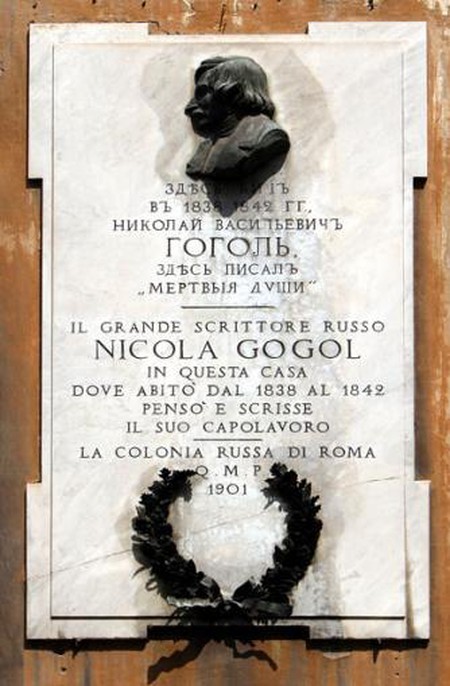 The year 1836 became a turning point for Gogol with both The Government Inspector and The Nose released to huge critical acclaim. The Government Inspector was a play satirising the bureaucracy of provincial Russian life, via its explorations of human greed and political corruption. Despite some critics believing it to be an attack on Tsarisism, the comedy saw many revise earlier opinions of Gogol and reclassify him as an important Russian writer. An altogether different example Gogol’s comic genius The Nose, his great surrealist piece, is an amusing story of a man who wakes one morning to find his nose missing. Exploring ideas of emasculation, impotency and absurdism, The Nose like The Government Inspector, represents a sea change for Gogol. Up to this point Gogol had been dissatisfied with writings he considered meaningless and hoped these new socially aware works may trigger a spiritual transformation in his audience. After these successes Gogol moved abroad claiming he could write about Russia better from a distance. Spending time in Germany, Switzerland and France, before eventually settling in Italy, he began work on two pieces that would capture the attention of the literary world.

Described by Nabakov as immortal and Gogol’s most fully realised piece.A philosophical tale The Overcoat (1842) sees Gogol at his most unique, original, and brilliant. The story of a man fulfilled by the small pleasures his obsessive nature finds in his bureaucratic work, Akaky Akakievich is the office joke, who suddenly finds himself thrust into a social climate of want and rank he does not understand. Like The Nose before it The Overcoat is a testament to the idea that when Gogol freed himself from the constraints of the realist literature he was celebrated for founding, and explored the dark obsessive nature of his own psyche, he produced truly original work that took him to a level without peers. Many still consider The Overcoat Gogol’s masterpiece. What followed was a novel with the potential to take him to even greater heights, but ultimately became the chief antagonist in the story of an increasingly religious man consumed by the guilt of his own success. 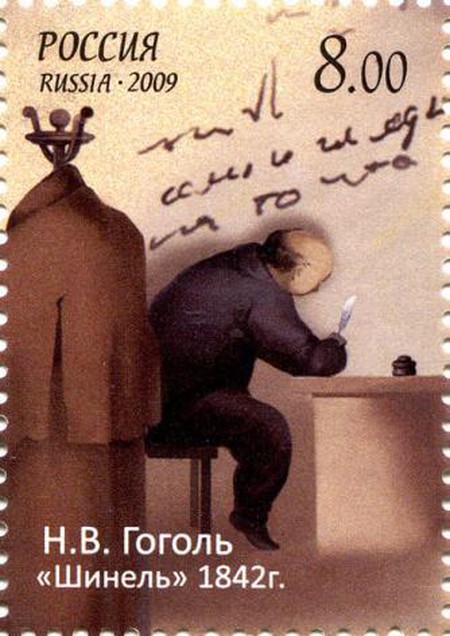 A stamp depicting The Overcoat, from the souvenir sheet of Russia devoted to the 200th birth anniversary of Nikolay V. Gogol, 2009 | Andrew Krizhanovsky/WikiCommons

An epic poem in prose, often regarded as one of the finest examples of 19th Century Russian literature, Dead Souls is an atrocity exhibition of caricatures. It is a ride on a carousel of greed; sentimentalism, picturesque countryside, and ridiculous get rich quick schemes. Devised as a piece on Homeric scale, it tells the story of Chichikov, a middle class man who sets outs on a bizarre quest to gain wealth and power by acquiring the ‘dead souls’ of peasant workers owned by the wealthy landowners of the towns he visits. Originally banned when submitted to publishers a revised version was an instant success, and regarded as the work of a truly great satirist. Gogol’s critics and contemporary’s were unaware however that this was the first piece in the jigsaw of an epic. From the very beginning Gogol planned further pieces to accompany Dead Souls. A second piece was devised which would depict Chichikov’s transformation under the influence of virtuous men, the Purgatory to The Inferno of the first instalment.

Following the success of Dead Souls Gogol set off travelling once more. He made a pilgrimage to Jerusalem, visited friends, scholars, and began work on Part Two of Dead Souls. A staunch believer in the power of literature to bring about spiritual change Gogol found himself at a crisis point during this first attempt at Part Two. Frustrated with his efforts he sought the help of spiritualists. Confiding a fear of perdition for the perceived sinfulness of his work, Gogol shared feelings of guilt, and expressed a desire for forgiveness. Finding little in ways of solace Gogol destroyed his manuscripts and fell into a prolonged state of deep depression. Years of illness and self-imposed spiritual torture followed until once more in the vice of spiritual crisis Gogol burnt many of his manuscripts, including a rewritten Part Two of Dead Souls. Blaming this latest act of self-destruction on the Devil, Gogol retreated from the outside world and took to his bed. Refusing food, and in the grips of fever, he spent nine days in considerable pain before dying.

The tragically farcical events surrounding Gogol’s death has lead Dead Souls to develop a reputation as a novel that drove its author to suicide. Seen by many as the ultimate example of life imitating art, its as if the boy who dreamed of being an actor came to the fore and assuming the role of Akaky Akakievich, devises his own downfall in the abyss of the obsessions that define him. This notion though does Gogol a great disservice. Of course we have to acknowledge Dead Souls never became what Gogol envisaged, but that first part completed ten years before his death endures in spite of not because of the books notoriety. It should be celebrated as the work of a great author who lampooned the state and all of its bureaucracies. It should be celebrated not in some morbid sense of its own mythologised tragedy, but as the centrepiece of a truly unique writers outstanding body of work.