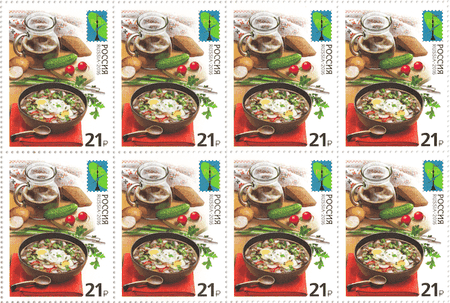 During the Soviet era, anything remotely bourgeois was squashed and replaced with a more egalitarian version. From rock music to private housing, nothing was exempt from the control of the USSR. Not even diets. Today, Russian food tells an interesting tale of the region’s social history.

What is now popularly known around the world as the Russian Salad didn’t start out as a salad, nor in fact was it particularly Russian. In the mid 1800s, a Russian chef of Belgian origins named Lucien Olivier established a high-end restaurant called L’Hermitage in Moscow. Open for 53 years, the venue gained a reputation as one of the city’s premier fine-dining establishments and offered its patrons rich European cuisine.

The original dish was a kind of Russian antipasto and resembled a plate of cold cuts. Game, aspic and shellfish sat side by side with potatoes and cornichons (little French pickled cucumbers). Olivier’s Provençal sauce was drizzled all over the deconstructed salad. But when the restaurant’s high-end diners received their plates, they preferred to mix everything into one indiscernible pile of food. Taking note, Olivier re-purposed the dish as a salad.

The chaos that enveloped the Russia Empire during the beginning of the 20th century shut L’Hermitage down. The restaurant’s opulence and luxury were rejected as bourgeois, and food shortages plagued the nation. During the upheaval of the Russian Revolution and the civil war that followed, the Olivier Salad would have completely disappeared were it not for the famous chef’s former apprentice Ivan Ivanov, who is said to have stolen the recipe during his time at L’Hermitage.

Ivanov’s version of the Olivier Salad (called Stolichny Salad) was made with more ideologically friendly ingredients. Luxurious elements like grouse and crayfish were replaced with chicken and carrots. And, as the salad became more widely known, the recipe was further diluted; Olivier’s exotic French dressing was replaced with a slathering of Russian-made mayonnaise, for example, and instead of capers came the new, essential Soviet addition: canned peas.

During the formation and expansion of Communist Russia at the end of WWII, Russian leaders had grand aspirations to improve life for the working class and grow the collective workforce. The rapid industrialisation of the early Soviet years spurred the proliferation of canned food. One of the most pervasive of these during Soviet times was tushonka, a type of stewed meat first produced as a military supply in the 1870s. It is estimated that the USSR produced roughly 600 million tins of it every year.

The longevity of canned produce meant that it could be stockpiled for ages, offering a way for the government to regulate the distribution of food. During food shortages, tinned foods could be transported across the expansive Soviet Union and doled out to communities in its far-flung reaches. Shop shelves would often be lined with tins that were months out of date. 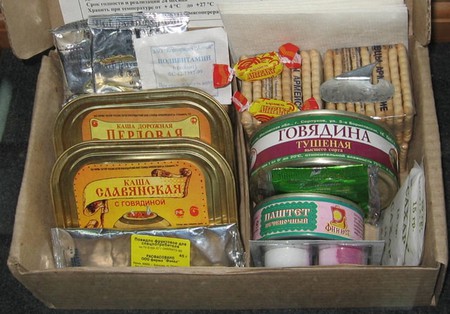 When canned food was initially introduced into the Soviet diet, the reception was unenthusiastic. State politicians decided to take the issue into their own hands and, ironically, did so by dangling a bourgeoise carrot before the proletariat. It is reported that Soviet politician Vyacheslav Molotov announced that a band of smugglers had hidden jewels in cans of fish and sent them abroad. To prove his point, he opened a can which contained a pearl necklace inside. Cans of fish across the Soviet Union were sold out within days and, as a result, a lot of canned fish recipes were created. Whether anyone had actually found a can full of jewels remains unknown.

Stolovayas were state-run cafeterias set up to serve the Soviet worker. They were aimed at meeting the challenge that came with feeding a growing proletariat class flocking into the nation’s cities. Food was now considered to be fuel, and home-cooking was renounced as bourgeois. The early post-revolution philosophy was to empower the poorer classes. It was within this social climate that Lenin introduced the stolavaya, which he claimed would liberate women from their domestic duties and allow them to join the workforce. A popular slogan of this brave new world was ‘stop kitchen slavery!’

It would be a stretch to claim that the stolovayas liberated women, but they did create a sense of geographic equality. Cafeterias were required to account for every morsel and crumb, and so many recipes were created to minimise food wastage. These recipes were standardised and dispersed across the USSR, so dining in a stolovaya was an identical experience in Ukraine, Vladivostok and Kazakhstan.

Despite widespread criticism that much of the canteen fare was bland, tasteless and reeked of cabbage, many Russians now look back with a nostalgic affection for these state-run institutions. A popular tradition leftover from the stolovaya days is the set-lunch menu, or the ‘business lunch’ as it’s now called, which is still common in restaurants across Russia. Midday dinner trays usually have a bowl of soup, a meaty main course and a vegetable-based side such as potatoes or mayonnaise-slathered salad. Kompot, a kind of non-alcoholic cordial drunk warm or chilled, would be served to wash the meal down. Stolovayas have even been appropriated by hipsters who are embracing a Soviet food revival.

From riches to rags

Throughout the Soviet era, Russian cuisine went from riches to rags, reflecting the period’s social and economic circumstances. Food was politicised, standardised and popularised. Olivier’s salad is just one example of dishes that were stripped of their opulence, crammed into the communist vision and fed to the proletariat en masse in Soviet eateries. But despite its turbulent origins, and perhaps even because of it, Russian cuisine is now eaten the world over.