A Foodie's Guide To Moscow, Top 10 Art And Culture Restaurants 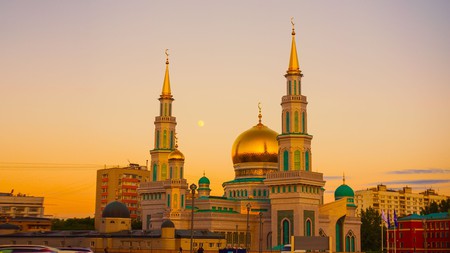 We explore ten of the most interesting restaurants in Moscow / Pixabay

If the old Russian proverb ‘schi (cabbage soup) and kasha (porridge) is our nourishment’ were anything to go by, food lovers would have little reason to visit the Russian capital. However, since the fall of the Soviet Union, Moscow has witnessed the arrival of huge numbers of new establishments, proffering everything from traditional Russian fare to the current fashion for sushi. We explore ten of the most interesting restaurants in Moscow showcasing local art and culture.

Since its beginnings in 1999, the opulent Café Pushkin has been a staple of eating out in Moscow. Set over three floors in a beautifully recreated 19th-century mansion, it radiates the historic decadence of Imperial Russia, with fully liveried waiters, elegant furnishings and antiques. Three themed floors comprise the restaurant; the Pharmacy, the Library and the Fireplace Room, all sumptuously decorated and each offering a different menu. You will be treated to a selection of outstanding Russian and international favourites, including caviar, dumplings and stews fit for a tsar, (although regrettably also priced for a tsar). Open 24 hours a day, the cafe also offers great breakfasts and fantastic views of Tverskoy Boulevard from the Library floor. This spot should always be first choice of those with a taste for the life of royalty.

Hidden away in an unremarkable block of old flats lies a tiny gem of a restaurant you would hardly notice was there. While its propaganda posters and faded carpets are throwbacks to mid-20th century living, this cafe-restaurant idyll nevertheless has none of the old Soviet austerity. Lined with bookshelves and furnished with period decor and antique furniture, Kvartira 44, or Apartment 44, resembles an extremely crowded sitting-room, and emanates a warm, intimate, old world atmosphere popular with students, intellectuals and artistic types. The menu generally consists of meats, pastas, fish and salads of ‘homemade European’, particularly French, influence, although many local diners drop by simply for a glass of wine or live music from the old and much-used piano in the corner. Bear in mind that smoking inside is permitted.

In what was once the famous Krasny Oktyabr, or Red October chocolate factory, is an eclectic network of studios, clubs, galleries and artisan cafes. A center for artistic endeavour with a definite hipster vibe, the building now houses the Strelka Institute, an art and design-centred educational project, in the heart of which the Strelka Bar can be found. Specializing in fresh, clean flavors, with a variety of healthy salads, noodle dishes, grilled meat and seafood, it a refreshing change from the heavy, carbohydrate-rich cooking you are most likely to be consuming in Moscow. Of particular note is the spectacular view on offer from the terrace, stretching out over the Moskva River, the Kremlin and Cathedral of Christ the Saviour. With a stylish interior and relaxed ambience by day, the bar transforms into a sophisticated club by night, with DJ sets and live jazz at the weekends.

Renowned and loved in Moscow, the Gallery Café is a sophisticated venue where art, music and glamorous parties combine as bedfellows. Opened eight years ago on the first floor of a 19th century mansion, this socially very well-connected restaurant has swiftly developed to secure itself a position as benevolent priest of high culture, with walls adorned in contemporary art and top DJs often serenading its wealthy diners. Despite its relatively comfortable atmosphere, this primarily sleek, stylish location is still a favorite with the cream of Moscow society, frequently to be seen enjoying their seafood or stew, and the prices certainly reflect this. The terrace upstairs sometimes hosts concerts and performances in the summer and is a prime spot for sipping your vodka into the early hours at all those fashionable parties.

Restaurant, Russian, $$$
Facebook
Email
Twitter
Pinterest
Copy link
Share
Map View
A place for those in the know, Mari Vanna will certainly reward your efforts if you manage to track down its secret door and ring the bell to enter. Inside, things seem much as they were 50 years ago in this bright little restaurant, decorated as a typical Soviet home back in the day. Old bookcases, vases, photo frames, televisions broadcasting old Soviet channels, a free-range cat and various other nick knacks grant this jewel of an establishment a distinctly nostalgic, homey feel. Fare is generally traditional, substantial Russian cooking, including many old favorites like warming stews, pies and dumplings. As it is not the largest of locations, bookings are strongly recommended. Such is its popularity that there are now even branches in London, New York and Los Angeles.
Open In Google Maps
10a Spiridon'yevskiy Pereulok, Tsentralnyy administrativnyy okrug Moskva, 123104, Russia
+74956506500
Visit Website
Give us feedback

One of Moscow’s oldest restaurants, Uzbekistan is an extravagant, opulent palace of oriental decor and cuisine. Dating back to 1951, it is furnished with colorful divans and gilded mirrors, patterned tables and rich woven rugs that transport you to a different time. A veritable cathedral to the senses, this is one restaurant which will dazzle you as soon as its threshold is crossed. Specializing in Uzbek cuisine, expect plenty of manty, mutton, chuchvara and pilaf as well as various sweets and preserves, although it also offers Azerbaijani, Chinese and Arabic cuisine. Along with the generous portion sizes, you will be entertained by troupes of belly dancers, cockfights and even the weekly parade of a slaughtered lamb through the restaurant; an exuberantly memorable experience.

This is a wonderland of which Alice never enjoyed the like. White Rabbit undoubtedly offers one of, if not the, most spectacular views in Moscow. From its stylish interior rooftop location, diners can experience a breathtaking full panoramic vision of the city. The restaurant specializes in refined modern takes on well-known Russian dishes masterminded by renowned young chef Vladimir Mukhin, drawing in the brightest and best from across Moscow and the world to enjoy its delights. Flashy parties are also often held here, attended by big names in music and film, and food is served throughout the night. Some of the culinary highlights include roast suckling pig, foie gras stuffed quail, beef tartare and fried octopus.

Headed by Michelin star-winning chef Anatoly Komm and built in veneration of the art of molecular gastronomy, Varvary truly offers a dining experience like no other. Original flavors and unexpected textures are the order of the day, so venture here if you are prepared to sample all kinds of weird and wonderful combinations, often in foam and cream form. The restaurant’s name, meaning ‘barbarian’ in Russian, defiantly refutes that popular trope of the boorish, unsophisticated Russian with both its exquisite Russian dishes and its elegant, theatrical decor; sleek silver tables, crystal chandeliers and deep reds walls. Just beware, meals here can be exorbitant. 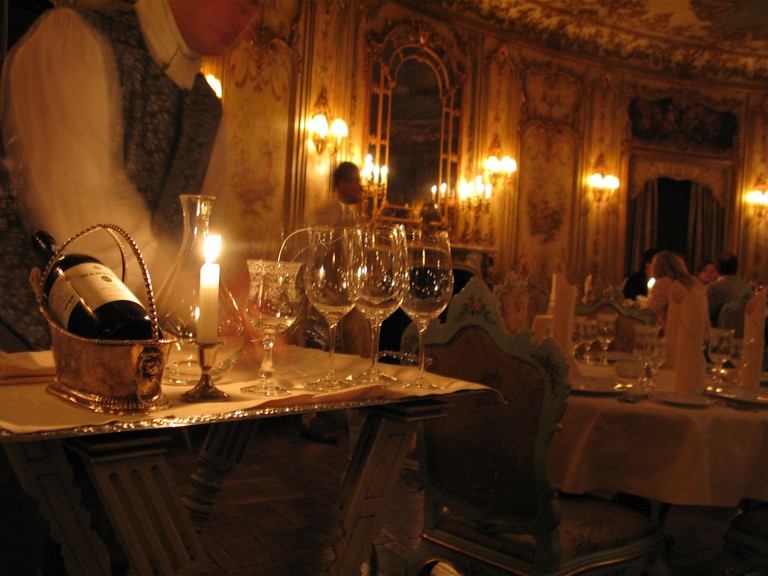 Perhaps the single most expensive restaurant in Moscow, the opera-themed Turandot is also quite possibly the most awe-inspiring place you have ever had the pleasure of eating. Estimated to have cost between $40-50 million to construct, this intricately designed restaurant is spread throughout 14 rooms resplendent in 17th century baroque magnificence. To describe it as overwhelming would be a great understatement. The food is of the highest quality: Expect the best caviar, wine, oysters, steak and champagne (Turandot serves an enormous variety of cuisine), because you will be paying top price for it. The whole experience, with its costumed waiters and over-the-top decor, is both surreal and bizarre, but part of the fun. Furthermore, at a place like this, you will likely be rubbing shoulders with the most powerful people in Moscow. It is certainly an experience not to be missed.

Cafe, Restaurant, European, $$$
Facebook
Email
Twitter
Pinterest
Copy link
Share
Map View
One for those who like being kept on their toes, Ragout has now been going for a few years and is as popular as ever with food lovers. Home of experimental European cooking and a proponent of ‘slow food,’ the restaurant frequently changes its (relatively short) menu, depending on the local availability of quality ingredients or creative whim of its Cordon Bleu-trained chefs. Regular appearances are made by steaks and pies, although there are often interesting vegetarian options. Highly regarded by critics and despite the artistic flair and exciting tastes of many of its dishes, it is very reasonably priced. An unpretentious atmosphere and cafe style furnishings make this a delightful spot for a late breakfast or casual lunch. Just be sure to make a reservation at peak times, as Ragout is now well and truly established as a strong favorite with Muscovites.
Open In Google Maps
69 Bolshaya Gruzinskaya Street, Moskva,, 125047, Russia
+74956626458
Give us feedback
Give us feedback