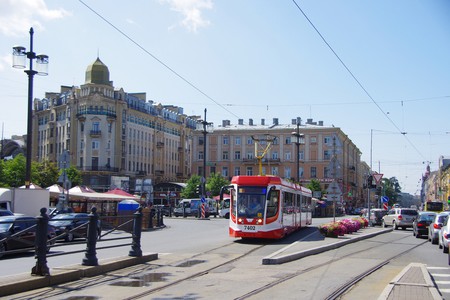 St. Petersburg is not only Russia’s most spectacular city and former capital, it is also the former capital of trams. As the city where the world’s first tram was invented and tested, St. Petersburg had a record-breaking tramway network up until 2002. Here are some amazing facts from the glorious history of St. Petersburg’s trams.

Public transportation didn’t come to St.Petersburg until the middle of the 19th century; before that the rich had been riding in their own equipages, and most people who couldn’t afford to hire a cab had to get around on foot. The first horse-drawn omnibus appeared in 1830 and could seat up to 17 people. By 1847, there were several omnibus routes and cars were color-coded depending on their destination. Since omnibuses were constantly overcrowded, it was decided to add a second deck – with much cheaper seats ironically named the imperial section.

In 1863, omnibuses were substituted with horsecars, or horse-drawn trams, which became so popular that the number of routes reached 25 by 1877. However, even that couldn’t satisfy the demand and horsecars also got an “imperial” second deck, which was meant for second-class passengers and was less expensive. Women were not allowed on the imperial deck until 1903, after the debates about letting the women use the “imperial” didn’t cease until 1902. However, horsecars turned out to be rather dangerous – 95 people were injured in 1900, and horses were less reliable and efficient than had been expected, so the city authorities yet again had to look for alternate transportation. Even though the world’s first electric tram was tested in St. Petersburg on January 22, 1880 by Russian engineer Fyodor Pirotsky, adjusting the existing horseway to electric trams was deemed too expensive. Also, owners of the horse tramway had a monopoly over railways, causing a 27-year setback in the development of electric transport in St. Petersburg.

In an attempt to create competition for the horsecars, the city authorities introduced steam trams in the 1880s, which proved to be a success; soon there were three lines and each tram was equipped with four cars. Steam trams disappeared from the city streets after 1922, but came back during the Siege of St. Petersburg when electricity was scarce. Another attempt to launch an electric tramway took place in the 1890s, when they used the frozen Neva River to lay down tracks. The ice tram was incredibly popular and served over 900 people per season.

Launching an electric tramway in Russia’s Venice of the North was no easy task. Transport tracks were to be laid down along 65 bridges, which had to be reconstructed first, and the city needed a new central power station and nine electrical substations. Finally in 1907, the St. Petersburg electric tramway was launched and by 1908 the track length was already 58 km (unduplicated). The beginning of WWI impacted the network growth in a negative way, and after the 1917 Revolution the situation worsened. By the end of 1918, there were only eight tramway routes left instead of the 29 at the beginning of 1917. Things started to look up after 1922, when Soviet authorities began to invest in electric transport. Trams were used for cargo operations as well, and St. Petersburg had a cargo tram depot which successfully operated until the 1990s.

During World War II, the work of St. Petersburg tramway changed completely. Operated and maintained mostly by women and children, they no longer just carried passengers, but were also used to evacuate equipment and valuables, transport fuel and convey the wounded. Due to power interruptions and snow drifts, by January 1942 the tram traffic stopped completely. Weakened by hunger and cold, people were forced to cover long distances on foot while empty trolley cars were disappearing into snow drifts, so restarting the tram traffic became a matter of life and death. After more than 150 km of overhead line had been restored, cargo trams resumed their service on March 8, 1942 and by April 15th five passenger tram routes were reopened. After that time, St. Petersburg’s tramway system never stopped working and by January 1945 the number of routes reached 20.

Powered by new technologies, the city’s tram network grew extensively after World War II to become the world’s largest by the end of the 20th century. With a track length of 600 km (unduplicated), St. Petersburg received the record in the Guinness Book as “the world’s trammiest city,” and held the title until 2002. These days, more tram routes are giving way to auto transport, but trams are still favored by its citizens. There’s even a tram monument and the Museum of Electrical Transport, where you can find a spectacular showcase of multiple generations of tram cars.