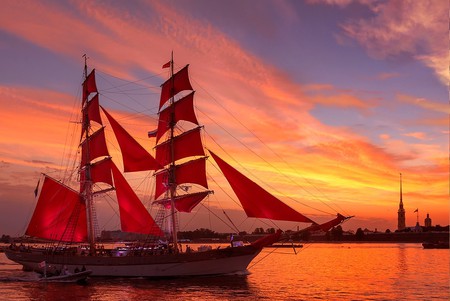 A romantic festival, created to celebrate youth and congratulate school graduates on the beginning of their adult life journey, is now considered to be one of the best festivals in the world, attracting thousands of people every year from Russia and abroad. We are speaking about the famous Scarlet Sails Festival, and here is the history behind it.

First started in June 1968, the concept of the festival is based on the fairy tale by Alexander Green, Scarlet Sails. The romantic spirit, celebrating love, dreams and hope, was there from the beginning and still remains as the basis of the festival. The first edition of Scarlet Sails was attended by around 25,000 school graduates and became a hit, which set a tradition to organize the festival every June, during white nights. However, in 1979, the celebration was suspended, and returned only in 2005. 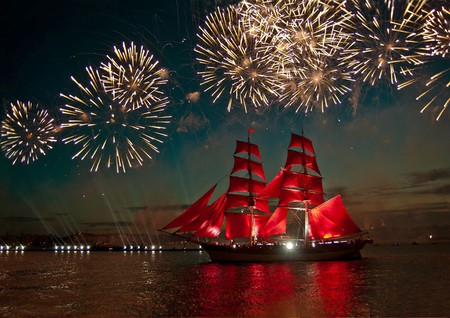 Nowadays, the festival organization is divided into two parts: it starts with a big concert on Dvortsovaya Square, followed by the spectacular show on the Neva River. Although the entrance to Dvortsovaya is invitation-only for school graduates, there is usually another stage on Vasilievsky Island where all other guests can join the concert while waiting for the main part of the festival.

The light and water show usually starts after midnight and is held on Neva River between Dvortsovyi Bridge, Peter and Paul Fortress and the Hermitage. Spectators can watch the show from the banks of the Neva River and bridges.

The spectacular show lasts for about 20-30 minutes and involves an impressive range of elements: pyrotechnics, light, orchestra, water show and, of course, the culmination is the appearance of a beautiful ship under scarlet sails. All elements are synchronized with the music and with each other, so the crew of the ship is under a tremendous pressure to make sure the ship passes every milestone exactly on the precise second when it is planned to happen.

Nowadays, there are just a few ships that exist in the world that can manage the task of being a live symbol of Scarlet Sails Festival. From 2009, the ship under scarlet sails is the Swedish “Tre Kronor.” The sails are produced following traditional marine sail technology, the only difference being that the ones for the festival are a bit thinner than the real ones you would use to sail the sea. 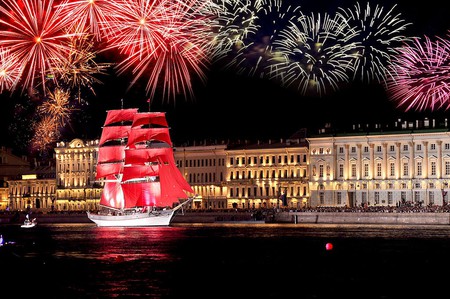 Every year, Scarlet Sails attracts between 1.5 to 3 million guests to the center of St Petersburg, to see one of the best city events of the year. From being a local celebration, the festival transformed into an international event, being shortlisted in several nominations of “Best European Event Award” and becoming a winner in the “Best City Event” category.

If you are planning your trip to St Petersburg around 15-25 June, make sure to check when the Scarlet Sails is being held. In 2018, it will be held on June 23. Once at the festival, bring some warm clothes as it still gets quite chilly at night in June, and come to the Neva embarkment quite early if you want to find a good spot – it gets really crowded.