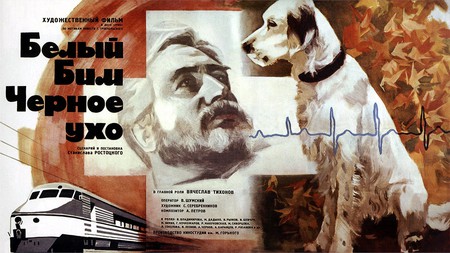 This year Russia’s best known doggie-drama turns forty. White Bim Black Ear is a tragic journey of a missing dog, trying to find his owner, which taught generations of Soviet children about love and compassion. Here are some facts about the movie that made people ugly-cry long before Hachi – A Dog’s Tale.

The story centers on a very intelligent Gordon setter named Bim, with an all white coat and black ears, which is unusual for his breed. When his loving owner is hospitalized, Bim is left with a somewhat careless neighbor to look after him. Pining for his owner, Bim runs away to find him.

Even the happy beginning cannot make up for the agonizing sadness of the movie in general.

The movie begins by showing us a widowed WWII veteran and writer, Ivan Ivanovich, played by Russia’s all-time favorite actor Vyacheslav Tikhonov, who saves a Gordon setter puppy from imminent death – the breeder is planning to drown him because of his inappropriate coloring. The writer adopts Bim, and the two get along incredibly well – the dog actor and Vyacheslav Tikhonov truly have amazing chemistry. But Bim’s happiness lasts mere minutes; when his owner’s war injury worsens, this seemingly simple story of a dog on a quest to find his owner turns into three hours of tears and torture.

The heartbreaking scenes will haunt you forever.

While trying to find Ivan Ivanovich, Bim encounters various people – some of them sympathetic, others indifferent or even merciless. The dog is constantly exposed to whatever human nature can possibly offer: from wanton cruelty, to sentimental pity to a sincere desire to help the animal in plight. But bad things just seem to never stop happening to Bim: prepare to have your vision blurred through a flood of tears, as you watch the unfortunate dog wander the streets, trying to find the trail of his master’s scent, running after the train where the girl that was kind to him is riding, or getting his paw stuck in the railway tracks. 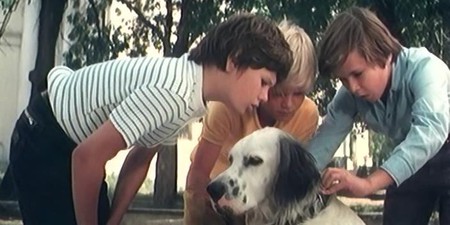 This movie has a message for all children – present and former.

It may come as a surprise, but this baffling and sad movie is based on a children’s book. Written by Gavriil Troepolsky, the book was translated into 52 languages and made its author a living classic. According to Troepolsky, this book “is a message to all the little ones, who will grow up one day, and to all adults who have not forgotten they once were children.” Apart from the obvious “love nature” moral, the book raises many existential questions, as the writer masterly shows the world through the eyes of a dog. While pondering the complexity of human nature, the book encourages readers to look into their hearts to find out how much compassion is left there and invites us to learn love and loyalty from children and dogs. No wonder the kindest treatment Bim gets in the movie is from children – the two boys he meets at different times of his wandering are both loving and caring, as opposed to the ignorant and prejudiced adults.

“White Bim” has the most hated antagonists in history of Soviet cinema.

By contrast, some of the adults Bim meets are cartoonishly appalling: the sneaky man that steals his collar, the indifferent father of one of the kind boys, who attempts to let Bim die in a forest, the gossipy neighbor – they all are to blame for the movie’s heartbreaking finale. Soviet actress Valentina Vladimirova, who played the unpleasant woman responsible for Bim’s last and fatal misfortune, confessed that, after the movie was released in theaters, she couldn’t leave her house without someone insulting her. 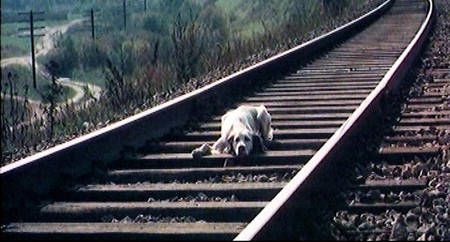 The ending will tear your heart out.

No matter how much you hope that things will start looking up for Bim, the movie will straight up break your heart with its devastatingly sad ending. [Spoiler alert] After months of searching, Bim and his loving master still never get to meet. Exhausted and weakened by hunger and cold, Bim dies on a freezing night inside a dog catcher truck, trying to warm an equally unfortunate puppy. When Ivan Ivanovich arrives in the morning, he finds his friend dead with his paws bloody from scratching the metal truck door. 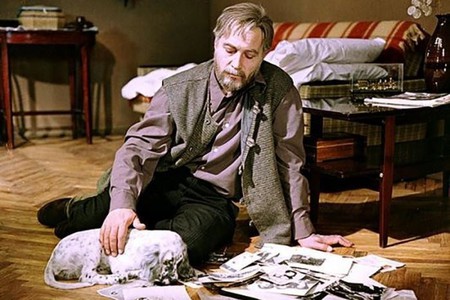 Bim’s legacy lives on even after his death.

The ending is predictably bittersweet: filled with remorse, the dog catcher quits his job; the father who left Bim to die in a forest, asks his son for forgiveness; the two boys who bonded over their search for Bim become friends; and Bim’s owner adopts the puppy that Bim kept warm on his last night. In the final scene, we see Ivan Ivanovich with a new dog, named White Beam the Black Ear, as they go to visit Bim’s grave.

Real monument for a fictional dog.

If you happen to be in Voronezh, the setting for the movie, you can take a picture with Bim’s life-size statue. It is considered the city’s unofficial mascot and is a gathering place for animal activists. Bim looks just as adorable as he does in the movie, and the inscription on his collar says: “His name is Bim, he is waiting for his master’s return, he knows the way home. Don’t hurt him, people…”.