10 Artworks By Kazimir Malevich You Should Know 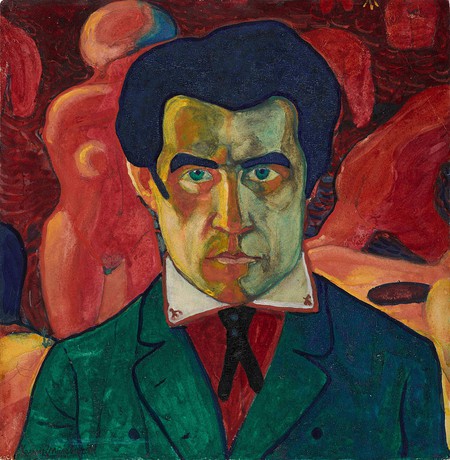 Born in Kiev in 1878, avant-garde Ukrainian-Russian painter Kazimir Malevich was a leading pioneer in abstract art of the early 20th century, whose increasingly stark works moved from Cubo-Futurism to the basis of the Suprematism art movement. We explore ten of his most captivating works, from the famous Black Square to Suprematist Composition, one of the most expensive Russian paintings in art history.

Hailed by the Tate as a “monochrome modern masterpiece,” Black Square is a cornerstone of abstract art first shown during The Last Exhibition of Futurist Painting 0.10 in 1915 and marks the start of Malevich’s Suprematism – a new, non-objective style of art characterized by geometric shapes and monochromatic palettes that the artist described as “the expression of pure feeling, seeking no practical values, no ideas, no ‘promised land.'” Along with many Malevich works, Black Square vanished from public view following his death in 1935 after socialist realism was declared the official artistic style of the Soviet Union. It was not re-exhibited again until the 1980s. 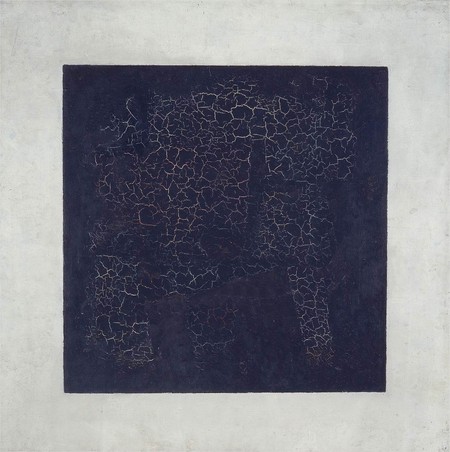 Though not an artist to dabble frequently in self-portraiture, Malevich’s circa 1910 Self-Portrait – today hanging in Moscow’s Tretyakov Gallery – is nevertheless a fascinating look at his earlier, pre-Suprematism works. Painted around the time of his studies at the Moscow School of Painting, Sculpture and Architecture when the artist came into contact with an array of art movements including Cubism and Futurism, Malevich’s Self-Portrait may be closer in style to French modern master Henri Matisse’s Fauvist-era works. Here, the beginnings of his interest in Modernism and symbolism are evident.

Painted in 1916, the same year during which Malevich wrote his Suprematist Manifesto, Suprematist Composition made art history when it sold for a whopping $60 million in 2008 at Sotheby’s in New York, making it the most expensive Russian painting ever auctioned. In 1927, Malevich traveled with Suprematist Composition to show it at exhibitions in Warsaw and Berlin and arranged for it, alongside several other works, to be stored in Germany. Later left in the safekeeping of German architect and writer Hugo Häring who reportedly sold the painting to Amsterdam’s Stedelijk Museum, Suprematist Composition remained in Holland for the next 50 years until it was returned to Malevich’s heirs prior to its auction. 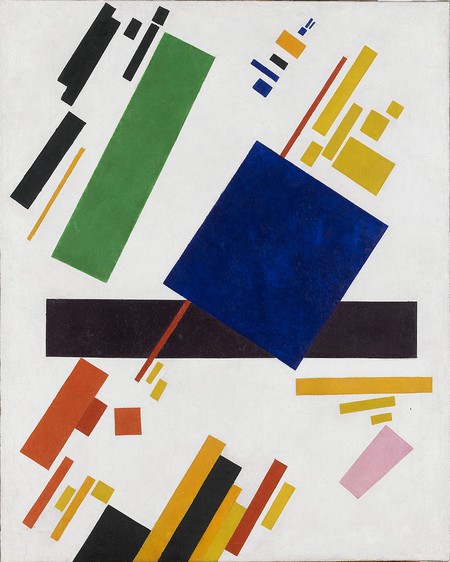 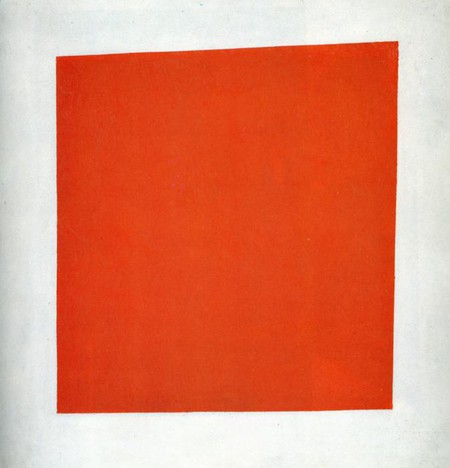 While Black Square may be the most iconic of Malevich’s Suprematism works, his White on White series – of which the 1918 artwork Suprematist Composition: White on White, in New York City’s Museum of Modern Art, is part – truly stretched the boundaries of abstract art theory. When Suprematist Composition: White on White – a crookedly positioned white square floating against a slightly differently hued white background – was first exhibited in Moscow, the painting was accompanied by a catalog in which Malevich invited viewers to “Swim in the white free abyss, infinity is before you.” 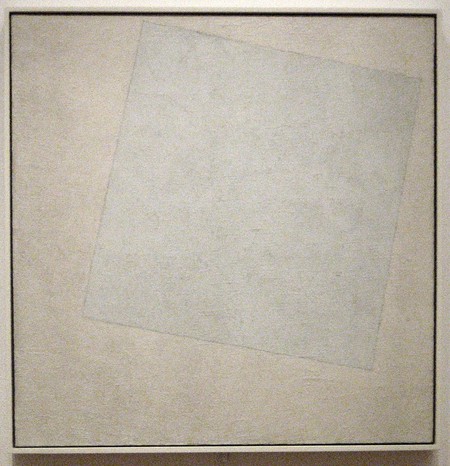 In Portrait of the Artist M. V. Matiushin, Malevich pays homage to his friend and peer, composer and painter Mikhail Matiushin – a prominent figure in the Russian avant-garde movement with whom Malevich had collaborated on the 1913 Cubo-Futurist opera, Victory Over the Sun, alongside writers Aleksei Kruchenykh and Velimir Khlebnikov. Like the opera, the painting is crafted in a Cubo-Futurist style, which Malevich would later abandon for Suprematism. Though typically fragmented and geometric in form, it features subtle nods towards the sitter’s identity – for example, the white keys of a piano pointing towards Matiushin’s occupation as a composer. 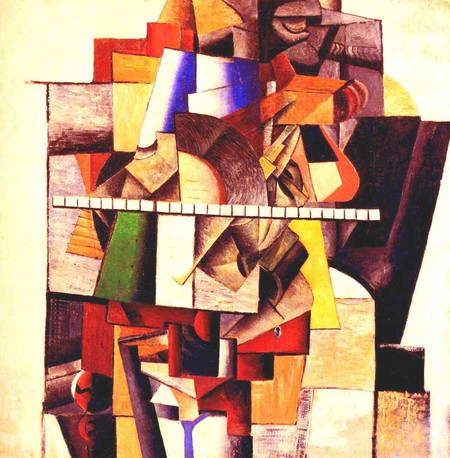 The Knife Grinder (Principle of Glittering)

A fellow Cubo-Futurist Malevich work, The Knife Grinder (Principle of Glittering) – located at the Yale University Art Gallery in New Haven, Connecticut – merges the Cubist elements of geometry and fragmentation with the creative energy of Futurism. Painted between 1912 and 1913, The Knife Grinder (Principle of Glittering) depicts a man hard at work against an industrial backdrop with its striking array of multi-colored metallic hues and multiplied fragments suggesting energy and movement. 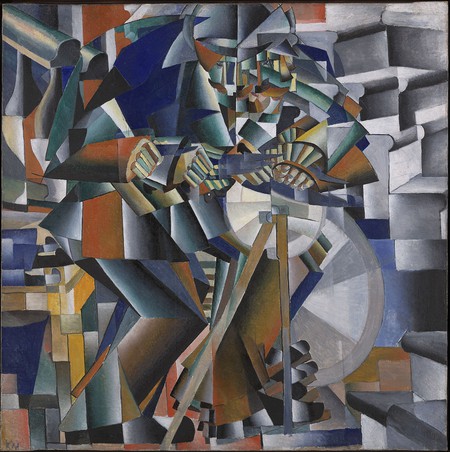 Another highly profitable artwork by Malevich, Mystic Suprematism (Black Cross on Red Oval) – hailed by Simon Shaw, co-head of seller Sotheby’s Impressionist and Modern Art department, as capturing ‘a moment when Malevich was at his most radical, iconoclastic and powerful’ – was sold in 2015 for $37.7 million. While the painting, created in the early 1920s, didn’t scoop quite as much at auction as Malevich’s earlier work Suprematist Composition, it nevertheless remains one of the most expensive Russian paintings ever sold – up there with works including Wassily Kandinsky’s Study for Improvisation 8 and Nikolai Roerich’s Madonna Laboris. 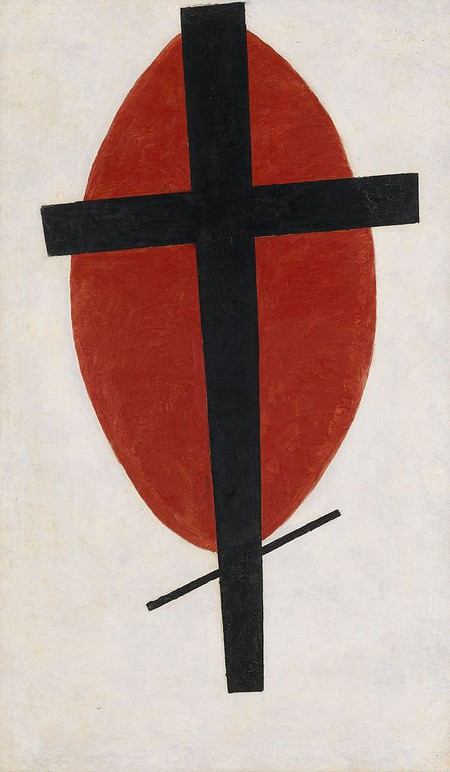 Quite alike in composition and theme to The Knife Grinder (Principle Glittering) and painted in the same timeframe, Malevich’s Woman with Pails: Dynamic Arrangement is a further example of the artist’s Cubo-Futurist period. The work – which in between its interconnected abstract, geometric shapes and cool, metallic tones reveals a peasant woman toiling away – had been on extended loan to the Museum of Modern Art since 1935 until the New York City institution finally acquired it in the early 1960s. 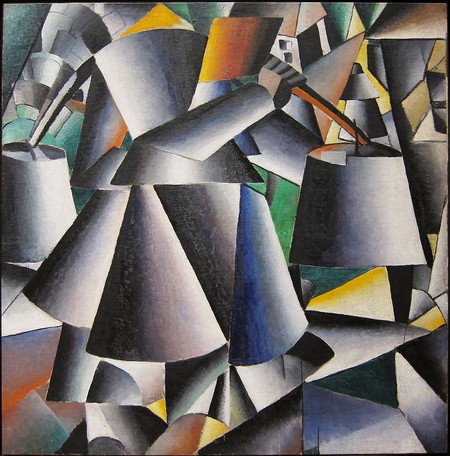 Compared to Malevich’s higher-selling Suprematist works, Suprematism, 18th Construction went for a song when it sold in a 2015 Sotheby’s auction in London for just £21.4 million ($33.8 million). Declared by Sotheby’s as “a masterpiece of 20th century avant-garde art,” Suprematism, 18th Construction was painted in 1915. In the typically minimalist style of Suprematism, the work is dominated by a black trapezoid-like form underpinned by four colored geometric shapes and set against what the artist referred to the ‘white abyss’ of the stark, colorless background. 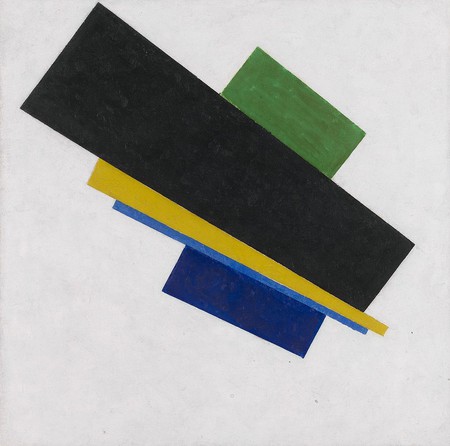