10 Artworks By Kandinsky You Should Know 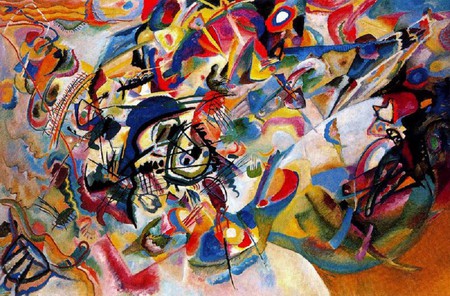 At first glance, Wassily Kandinsky’s artwork might confuse you; how can all of those disparate paintings have come from one artist? Born in Odessa, he experienced both the October Revolution in Russia and then the rise of the Nazis in Germany before moving to Paris to live out the rest of his life. Kandinsy’s artwork went through amazing changes – and the ten paintings below are a great way to see the proof.

Kandinsky would eventually be credited for creating the first purely abstract painting – but Der Blaue Reiter is not it. This painting, completed in 1903, is a good example of his earlier works, which display the influences of French Impressionism and, to some extent, Pointillism. This work in particular would eventually be remembered for another reason – in 1911, Kandinsky was among a group of German and Russian artists to found a group called Der Blaue Reiter, or The Blue Rider, in response to a different painting of his being rejected from an exhibition — although it’s unlikely that he named the group after this painting. 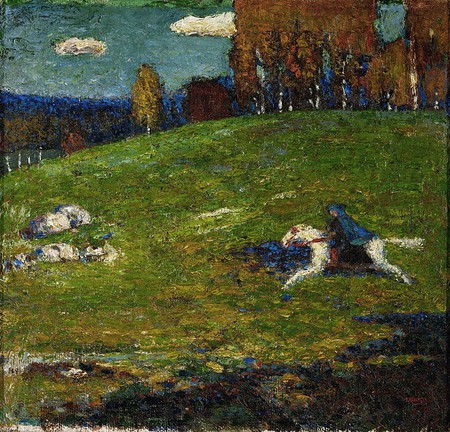 Kandinsky’s paintings would gradually become more and more abstract, and with Murnau, Train and Castle, you can see a stop along the way. Kandinsky painted it in 1909 after he had traveled through much of Europe and then decided to settle in Murnau – a small town in Bavaria. In this painting, you can see how the color plays almost as big of a role as the forms it shapes, although the forms here are still themselves clear; the train and the castle are both evident, as are various elements of the background. 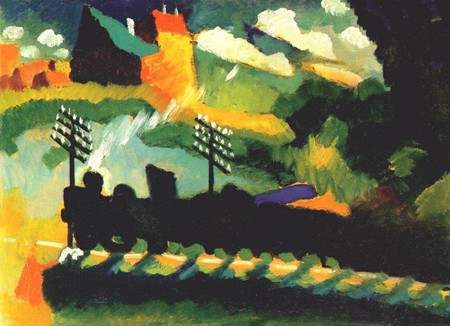 The Rider, a painting from 1911 – at the beginning of Kandinsky’s time in The Blue Rider group – offers a good chance to compare and contrast his earlier and later work, especially given that the subject matter here is so similar to Der Blaue Reiter above. The horse and rider are clear here, but they are merely lines and colors without the smaller detail and background scene that you’ll find in the earlier painting. This is actually one of his less abstract works of the period, but it still captures the same energy and force. 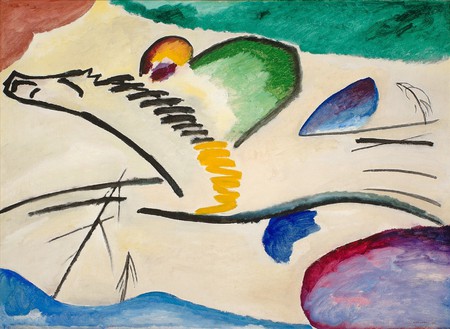 For Kandinsky, who often referred to his paintings with terms generally reserved for the world of music, the “improvisations” were spontaneous and unplanned pieces, whereas the “compositions” were more intricate and planned out. His use of the terminology was not merely by chance; as an art theorist, he saw many connections between the way that music and abstract art can reach pure feelings and emotions – better, he felt, than realistic pieces. Improvisation 27 is also called The Garden of Love II, which gives new potential to what it is expressing. 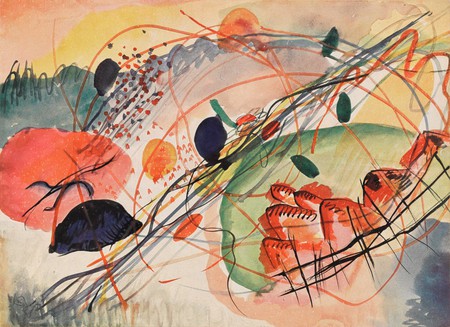 Composition VI is an abstract piece that Kandinsky meant to bring about specific images – specifically, the apocalypse by water, plus baptism and rebirth, all in one giant painting. He encountered a block along the way, though, which he would only get past by taking the advice of a friend to repeat the German word for ‘flood’ (überflut) over and over again, hearing the sound but ignoring the meaning. This allowed him to release himself from his thoughts on the piece, and after that breakthrough he completed it in three days. 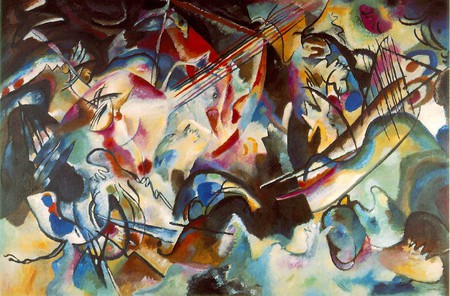 Composition VII is a sort of culmination of those Blue Rider years, as to his mind it was the most complex piece that he ever painted. Like the compositions that came before it, this painting has a very spiritual side – like much of Kandinsky’s work. He meant to bring about a spiritual connection between himself and the viewers through the painting – a conduit that evoked similar feelings on both sides. While it may look like just splashes of shapes and colors, Kandinsky saw a meaning for each color, and he put them together with great purpose.

With Points, you get the chance to see the next direction of Kandinsky’s paintings. They gradually became more geometric in form, and Points is a good illustration of how he conceived of these geometric forms. The two main elements of his paintings at this time were lines and points. Both took on additional meanings in his theory; a point is merely a form in the painting, not limited to any specific color, size, or shape. Lines are the result of an artist applying force on a tool, a paintbrush or pencil, in a specific direction, and even the directions and curves (or lack thereof) of the lines held specific meaning to Kandinsky. 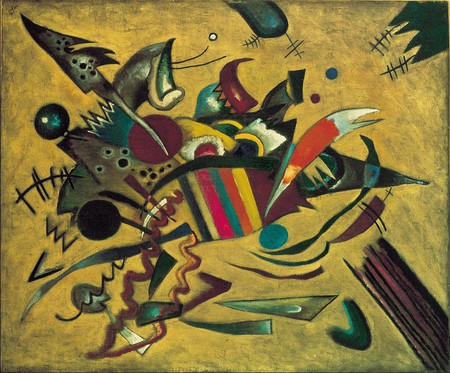 One of his most famous works, On White II, painted in 1923 (three years after Points, which was painted in 1920), shows the development that Kandinsky’s geometric painting underwent in a relatively short time. The lines are crisper, the forms sharper – but they all were governed by Kandinsky’s understanding of what the various lines and colors meant when they came together. For him, white symbolized complete silence and complete possibility, and white and black form the second great contrast of colors, which you can also see in this piece. 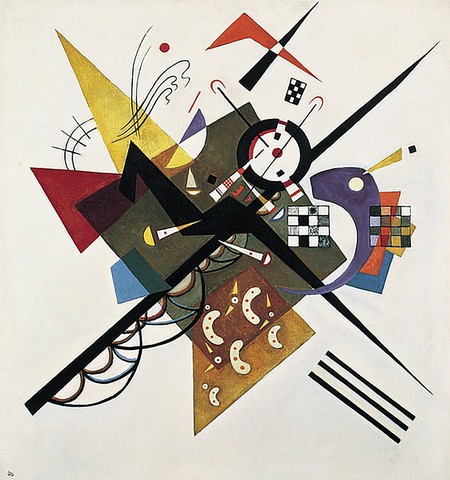 Several Circles is notable for the way that Kandinsky uses colors, with the perfect circles overlapping and their colors blending to form entirely new ones. The black background is also important – to him, black symbolized, most simply, death, but also hopelessness and nothingness. The other colors, however, add to the piece’s overall impression, which at first glance looks rather colorful and bright, like fireworks or planets; they each had their own meanings, along with the combinations between them. Blue, for example, is a color that for Kandinsky belonged to the sky and was meant to evoke a deep sense of calm. 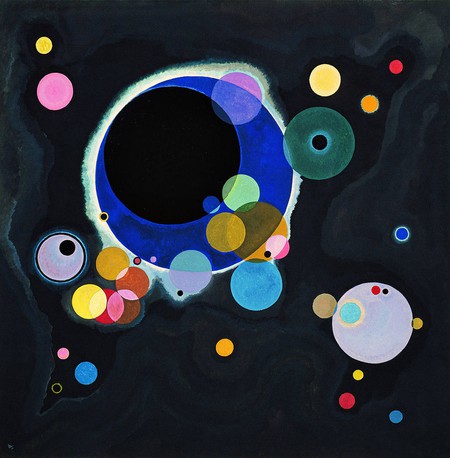 Once again we get to see a new style of Kandinsky’s with his Composition X, painted only five years before his death. The period between 1934 and his death in 1944 is called the Great Synthesis, when all of the phases of both his art and his theory came together into a series of paintings with unique style and flair. In this work, as in many others, Kandinsky meant for some features to be obviously immediately and for some to only reveal themselves with time and greater connection. The connection between the artist and the audience through the painting was, through his last days, paramount for Kandinsky. 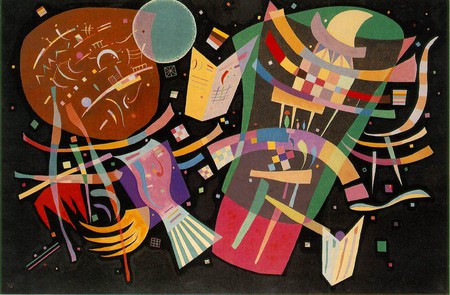