The Best Beaches in the Algarve, Portugal 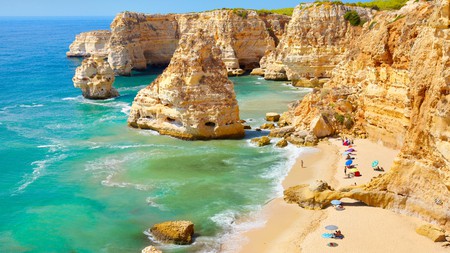 The Algarve is Portugal’s most popular region with tourists – and with good reason. The area’s beaches range from kaleidoscopic coves to windswept Atlantic sprawls.

The Algarve in southern Portugal is one of the most popular tourist destinations in Europe, known for its dramatic Atlantic beaches and world-class golf courses – but that doesn’t mean you can’t still find secluded coves and luxurious beachfront destinations away from the crowds. Whether you’re looking for one of the Algarve’s pristine naturist beaches or a stretch of coast offering private sunbathing spots and acclaimed seafood restaurants, we have you covered with this list of the best beaches in the Algarve. 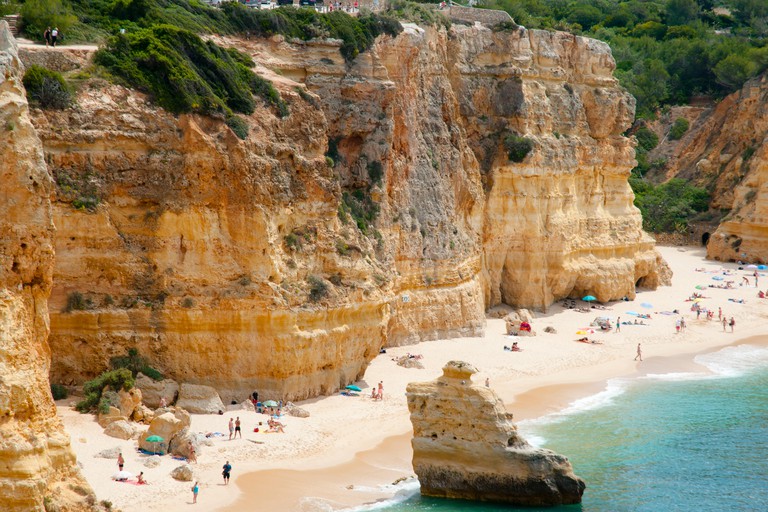 This iconic beach is among the most beautiful beaches in Portugal and it regularly makes it on to lists of the world’s best beaches. The small, sandy beach is surrounded by towering orange limestone cliffs that dramatically contrast with the turquoise waters. But it’s the sculptural rock formations that really set this beach apart – including the double-arched M Rock or Cathedral, which has become emblematic of Portugal’s natural beauty. To get an up-close look at the rock formations, book one of the boat tours, or go snorkelling in the clear waters.

Once the location of a small tuna fishing community, Praia do Barril is one of the best beaches near the coastal town of Tavira. Alongside pristine white sand and clear waters, it’s most notable for the fascinating insight it gives into the area’s fishing heritage. The defining feature of the beach is the Cemitério das Ancoras, an anchor graveyard nestled among the dunes. The hundreds of rusting anchors stand testament to the fishing industry that once thrived in the waters off the beach – and it makes for a pretty spectacular photo opportunity. 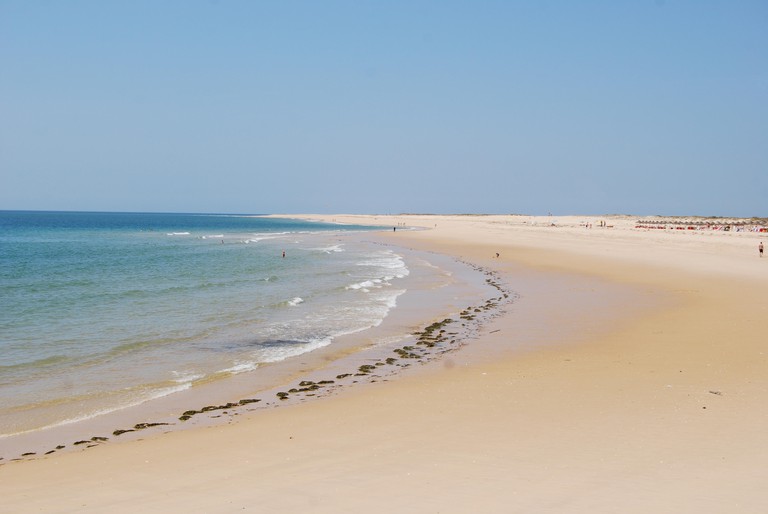 Ever dreamed about being stranded on a desert island? Bring those dreams to life at Ilha Deserta, a narrow islet that is one of five barrier islands in the Ria Formosa Natural Park near Faro. Also known as Ilha da Barreta, the island can be reached by a public ferry line that runs daily throughout the year, or you can rent a boat. During the fall, flocks of migratory birds descend on the island, making it popular with birders. There’s also a part of the island that is used by naturists for nude sunbathing.

Want to discover one of the Algarve’s best snorkelling destinations? This hidden cove, an hour west of Faro, features shallow, clear waters and plenty of marine life around the rock formations submerged in the ocean. The v-shaped cove is accessed via a tunnel carved into one of the towering cliffs that surround the beach. In the tunnel, take care on the uneven ground and keep an eye out for the marine fossils in the walls. Cliff diving is also a popular activity here – but can be dangerous. 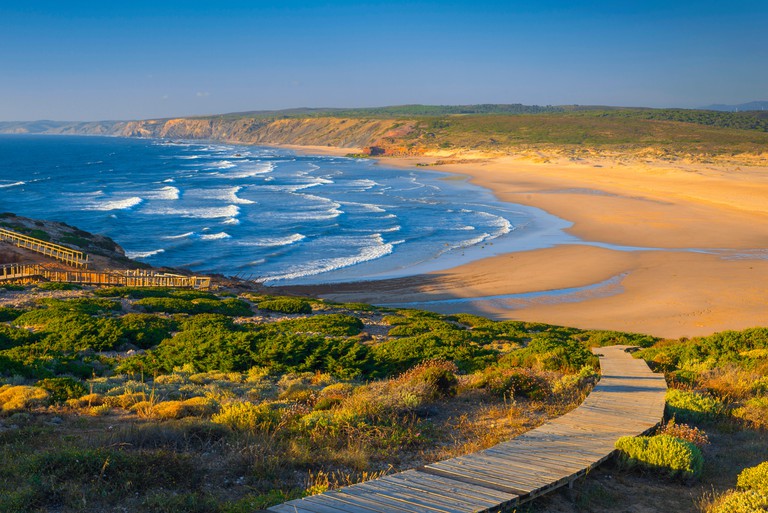 Praia da Bordeira | © Jon Arnold Images Ltd / Alamy Stock Photo
Costa Vicentina Natural Park is home to some of the Algarve’s best surfing beaches, including the 3km (1.9mi) long Praia da Bordeira near the village of Carrapateira. If you’re planning on surfing or swimming here, you’ll need a wetsuit to tackle the cold Atlantic waters – and you’ll want to know what you’re doing, as there are strong currents and large waves. The neighbouring Praia do Amado is also a popular surf beach and can be reached from Praia da Bordeira via a clifftop hike.

This long stretch of golden sand on the boundary of the Ria Formosa Natural Park, between Faro and Quarteira, sits within the Algarve’s Golden Triangle, which is home to the region’s most affluent resorts. The Blue Flag-rated beach is known for its spectacular natural beauty – think sand dunes, clear waters and golden sands – and also benefits from amenities including sun loungers, lifeguards and kayaking, with paddleboards and wakeboards for hire too. In keeping with its upmarket location, it’s home to some of the area’s best seafood restaurants, such as the acclaimed Dois Passos, which was founded 30 years ago and is featured in the Michelin guide. 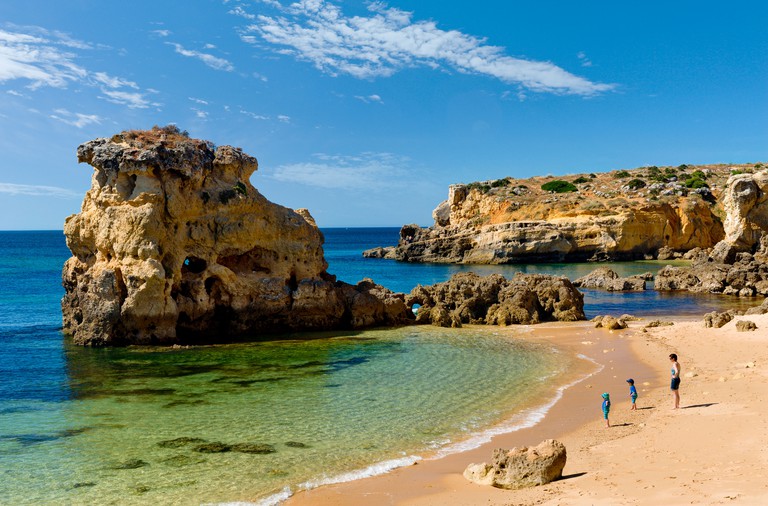 Praia dos Arrifes | © Mikehoward 2 / Alamy Stock Photo
This tiny beach, near Albufeira, is also known as Praia dos Três Penecos (Beach of Triple Rocks) due to the three towering rock formations that jut out of the ocean in front of the sand. These rock formations not only make Praia dos Arrifes a picturesque location, but also a great snorkelling destination. If you’re planning on swimming or snorkelling here, however, you’ll need to pack water shoes to protect your feet from the submerged rocks. The beach is also ideal for sunbathing as it’s protected by low cliffs that shelter it from the wind.

One of the most magical places to watch the sunset in the Algarve is Praia de Cacela Velha, also known as Praia da Fábrica. It’s known as one of the best beaches in Portugal – but amazingly never feels too crowded. At low tide, a network of lagoons and tidal pools appears on the beach, which kids will love to explore. It’s also worth visiting the former fishing village of Cacela Velha, which has a viewpoint that offers expansive views over the beach, as well as pretty cobbled streets, whitewashed houses and a 16th-century church. 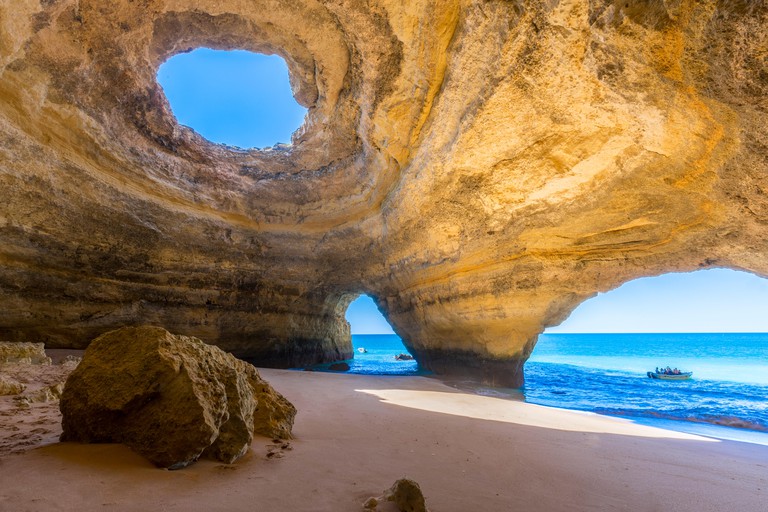 Portugal’s rugged coastline has been dramatically shaped over millennia by the power of the Atlantic Ocean and winds – and the Algarve is known for some of the world’s most impressive rock formations and sea caves. The best known of all these formations is Benagil Sea Cave, an enormous cathedral-like cave with a hidden beach, two arches that open to the sea and a circular opening in its roof that frames the sky. You can reach the cave by one of the many boat tours, or hire either a kayak or stand-up paddleboard to make the trip yourself.

After a long day on the coast, you’ll want somewhere to call base. The Algarve offers a range of places to stay from hotels to apartments, now bookable via Culture Trip, that’ll make you feel at home in Portugal. After exploring the beaches, discover nearby towns like Vilamoura and Lagos, which host a number of mouth-watering restaurants and bars.

This is a rewrite of an article originally by Carolina Antunes.