The 12 Most Unusual Experiences in Gdańsk, Poland 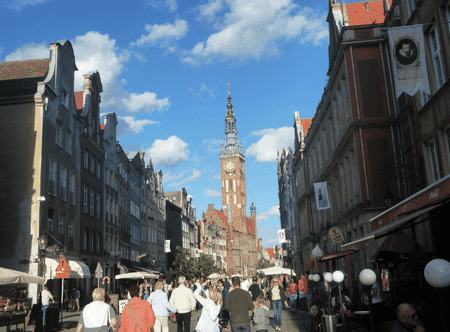 Gdańsk is brilliant. It is one of the most popular destinations in Europe at present and it’s easy to see why. With a huge range of unforgettable sights to accompany some of the most historically relevant buildings in European history, you can’t fail to be enthused by this Polish city, which makes up part of Poland’s famous Tri-City (Trojmiasto) area. But away from the more common touristic sights, are there some crazy and unusual things to do here? Yes, for sure, and here are 12 for starters. 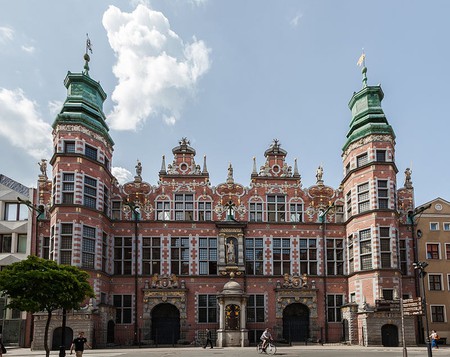 The 12 most unusual experiences in Gdańsk, Poland | ©

Watch football in a Speedway stadium 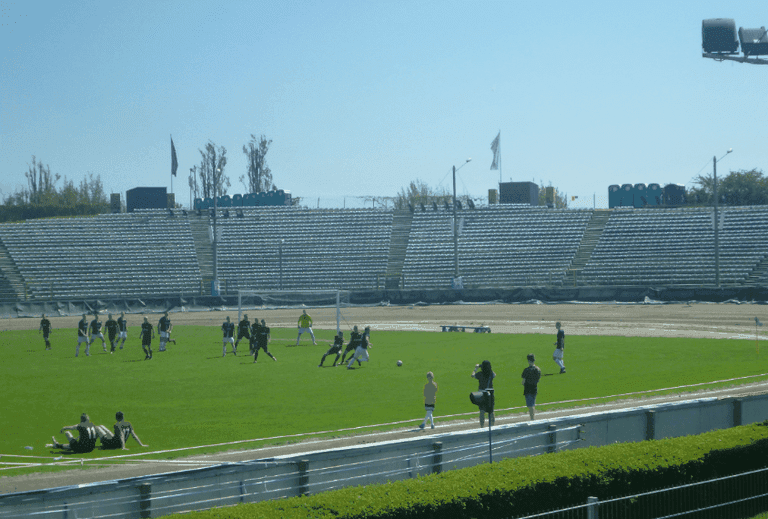 Watch football in a Speedway Stadium | © Northern Irishman in Poland
Speedway (motorcycle racing in a stadium) is huge in Poland and believe it or not, just a fifteen-minute walk from Gdańsk’s Stare Miasto is a 15,000 seater Speedway track and stadium. But to make things more unusual, why not head here and watch football instead of Speedway? Local team GKP Wybrzeze play their home matches here in the pitch in the middle and unless it’s a major match, entrance is free.
Open In Google Maps
1 Zawodników, Gdańsk, Pomorskie, 80-729, Poland
+48583463027
Visit Website
Give us feedback

Run into the freezing Baltic Sea

While Poland may not have many nude beaches (Lubiewo in Międzyzdroje being an exception), it does offer dips into the freezing cold water in the winter. Some crazy people do a famous winter dip into the freezing waters of the Baltic Sea on the gorgeous wild beaches in Gdańsk, including Brzezno. 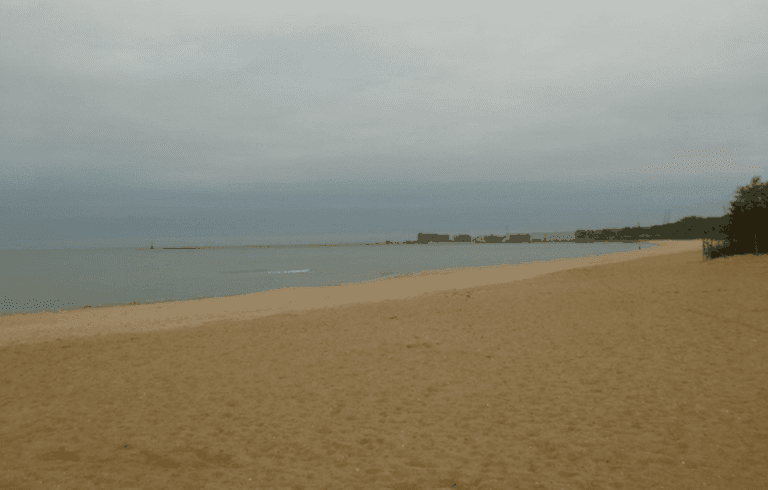 The beach at Brzezno | © Northern Irishman in Poland

Eat in a tram that doesn’t move

As well as possessing an awesome Old Town (Stare Miasto), Gdańsk also has what is known as its “Dolne Miasto,” which kind of translates as Lower or Upper or Town, and it’s a mere island away from the Ulica Długa. Here, on a dis-used tram track sits a tram that never moves. Even cooler is that it now operates as a restaurant, café, and bar, so you can sit on an old-school Polish tram having your lunch in peace. It’s one for Instagrammers for sure. 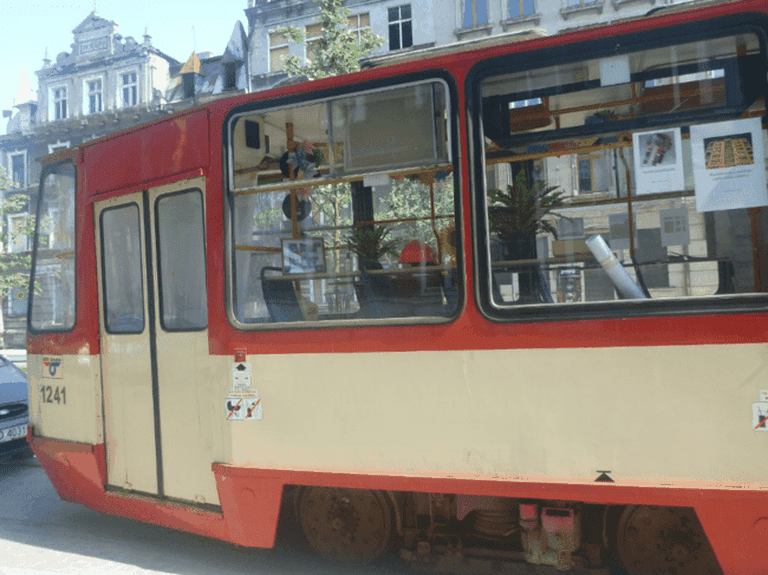 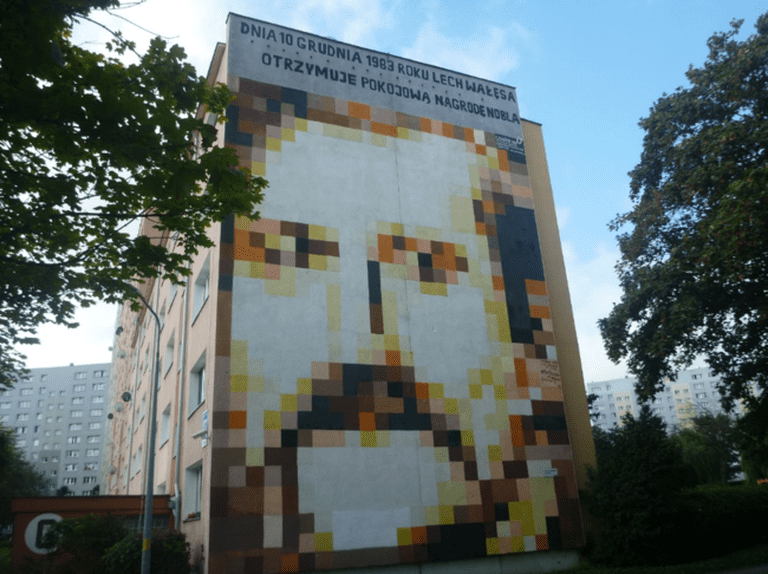 "Lech Wałęsa" Mural in Zaspa | © Northern Irishman in Poland
The Gdańsk suburb of Zaspa is a pure gem because it has a stunning, free, and unusual outdoor art exhibition that has to be considered “off the beaten track.” Almost all of the residential blocks of flats in Zaspa have had their walls painted. But not just normal paintings—huge murals displaying some of the finest wall art you can imagine and documenting some of Poland’s political history, inspired by the fact that Lech Wałęsa (Poland’s President from 1990 – 1995) used to live here. Viewing the murals is free, as people live here and it’s a residential estate, however, a guided tour can be arranged from the official website.
Open In Google Maps
Gdańsk, Poland
Give us feedback

Eat in a potato restaurant 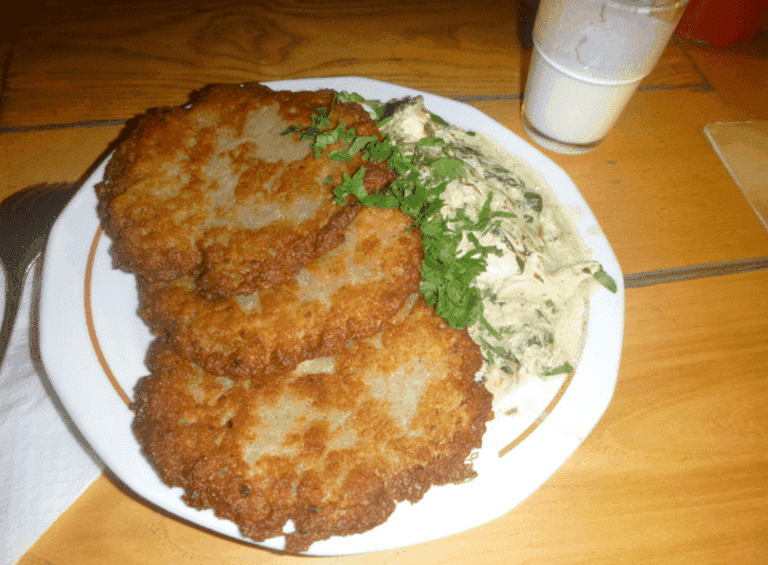 Pyra Potato Bar, Gdansk | © Culture Trip / Northern Irishman in Poland
You could be forgiven for thinking you were in an Irish Restaurant, as Pyra Bar here in Gdańsk offers a scintillating menu of potato-based meals. You can expect to eat potato pancakes, potato casserole, pasta with potatoes, and potato soup. In short—it’s a potato lover’s paradise and a real surprise to find here in the heart of Gdańsk—the bar is on Garbary, just off Gdańsk’s Ulica Długa.
Open In Google Maps
6/7 Garbary, Gdańsk, 80-827, Poland
+48583019282
Visit Website
Visit Facebook page
Give us feedback

Gdańsk might be miles away from Stratford upon Avon and the legacy of William Shakespeare, but here in Gdańsk they have an entire theater dedicated to him! So escape the usual droves of tourists in the center of Gdańsk and visit the special Gdański Teatr Szekspirowski. As well as regular Shakespeare plays, there are numerous theatrical events in town.

A post shared by The Gdansk Shakespeare Theatre (@gdanski_teatr_szekspirowski) on Sep 3, 2017 at 9:09am PDT

Drink and dance in a World War II shelter

It’s not against the rules anymore to head to a World War II shelter to have a few cocktails, some local beers, and dance the night away. A local brainchild and hidden gem is the Bunkier nightclub. It’s everything you hoped for but didn’t believe existed. It is a bar with good food, five levels, fantastic cocktails, history lessons, and a stylish interior. One of the toilets is even inside an old prison cell. From outside, it looks like a completely dis-used war shelter. 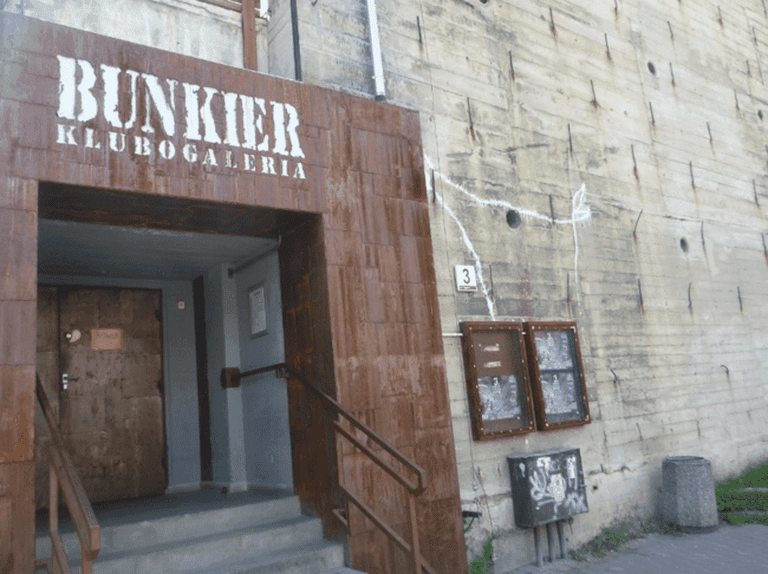 Gdańsk’s oldest restaurant, Kubicki, pumps out a beat that has you gagging for a taste of something special. The venue is the oldest consistently running restaurant in the city, having survived the Second World War (where Gdańsk’s Ulica Długa was completely destroyed) and the entire communist regime. The interior décor is quaint and this is a fantastic place to go for a romantic first date. The local pierogi, soup, and bigos options are both healthy and tasty and Kubicki also serves up sumptuous cocktails.

Check out the longest residential building in Europe

Building
Facebook
Email
Twitter
Pinterest
Copy link
Share
Map View
Here in Gdańsk, there is a communist-era residential block which is the longest residential building in Europe. Locally known as Falowiec, which translates as “wavy block,” it’s a huge piece of architecture which astonishingly houses nearly 6,000 people—almost a town in itself. Built between 1970 and 1973, it is yet another iconic Gdańsk landmark and one of the more peculiar touristic things to check out.
Open In Google Maps
falowiec Gdańsk, Pomorskie, 80-358, Poland
Give us feedback

Officially, the unrecognized autonomous region of Kashubia (Kaszuby in Polish) classes Gdańsk as their capital city, even calling it “Our Capital Gduńsk.” And as Polish itself might seem like a tricky language, Kashubian tests you even more. Belonging to the group of West Slavic languages, it is the only language in Poland registered as an official regional language, with 76 dialects, some of which are mutually incomprehensible. It retains some Polish archaic words, long forgotten in the Polish language and oddly, some commonly-known Polish words have a totally different meaning in Kashubian! Sadly, the number of people using the Kashubian language is decreasing but there is no shortage of options to learn it and keep it alive. So, as well as visiting some Kashubian towns, get in touch with the local Kashubians, who have their headquarters in Gdańsk, and arrange some lessons! 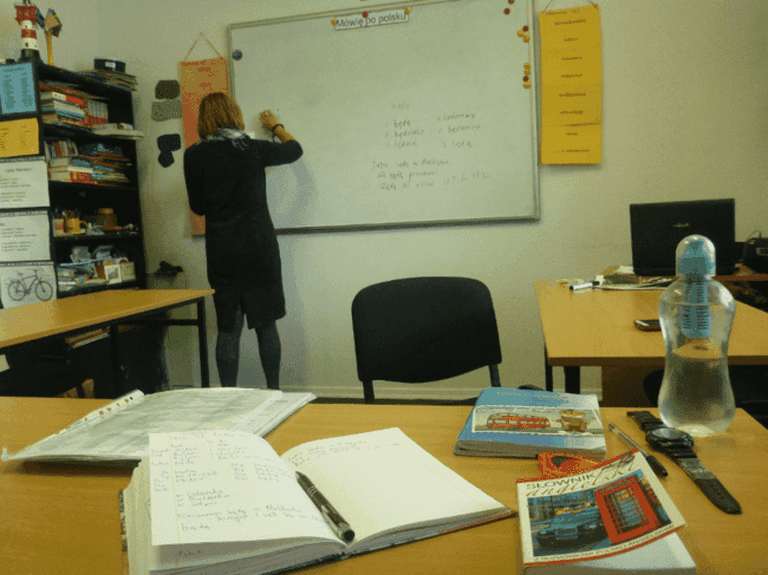 Test yourself by learning Kashubian | © Northern Irishman in Poland

Cruise to Westerplatte on a pirate ship

Situated in Gdańsk harbor is a pirate ship known as The Black Pearl (or Czarna Perła) and from here you can book a cruise on it out to the infamous Westerplatte. The peninsula at Westerplatte was one of the places where World War II began in September 1939. It’s a sad history but something worth checking out to understand the tough times this city has been through. 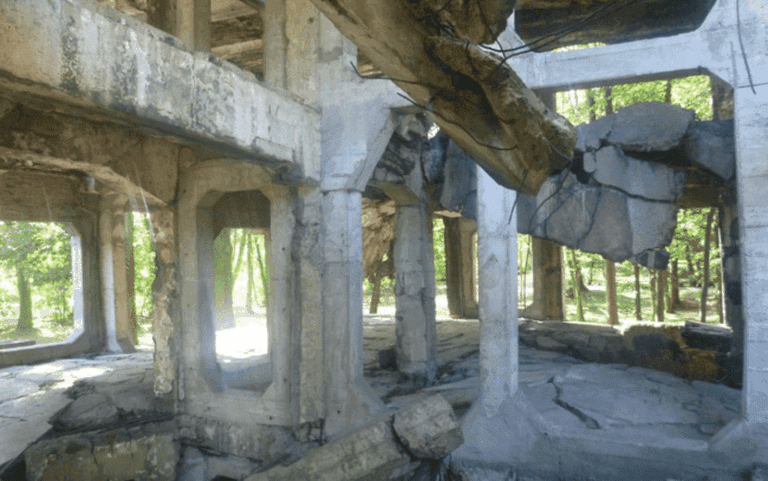 See the Berlin Wall and Shipyard Wall side by side

In a city steeped deep in history, there is a quirky corner not far from the main train station where there are two genuine parts of two famous walls. Here, there is a fragment of the actual Berlin Wall sitting next to a fragment of the famous wall at the Gdańsk Shipyard, which was pivotal in the Solidarnosc movement of the 1980s. Both monuments are accompanied by plaques and there is a “walk of freedom” path which leads from here all the way to the shipyard itself. The monument and path start on the corner of Rajska and Wały Piastowskie. 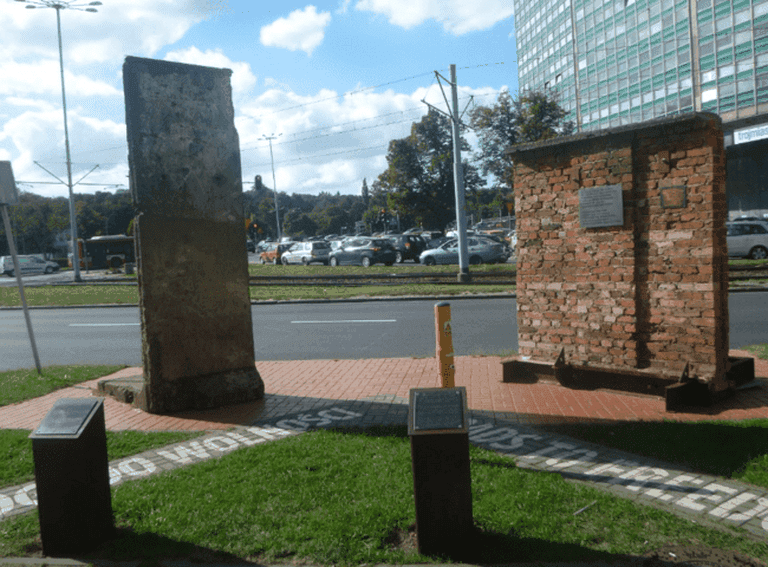