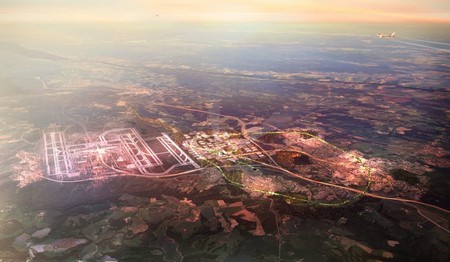 What came first: the airport or the city? This chicken-and-egg question may seem bizarre at first but if you think about it, busy airports and urban development often go hand in hand. That’s merely one of the reasons Norway will be expanding the area surrounding Oslo Airport Gardermoen to include an innovative business park that will be completely sustainable and energy-positive.

A new hub for the future

The area right next to Oslo Airport Gardermoen (OSL) and the city of Jessheim, which is now mostly home to company headquarters and service providers, will soon become Norway’s most central hub. Its name: Oslo Airport City, or OAC. This “new and better city” will span an area of approximately 260 acres, with a development of approximately 1.000.000 m², and will include a hotel, a convention center, offices, commercial areas and recreation facilities. The development is expected to completely transform the already fast-growing area of Ullensaker municipality. The master plan for the development has been assigned to Norwegian firms Haptic Architects and Nordic Office of Architecture (who designed the original airport in the ’90s and completed the curving extension last year). 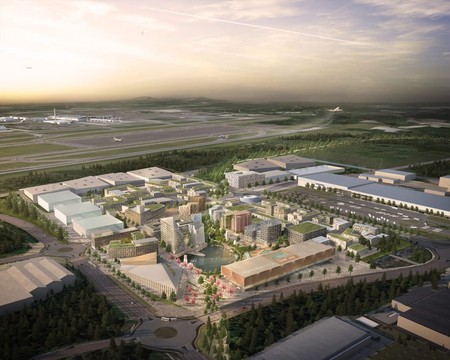 What really sets this project apart is that OAC will be the first energy-positive airport city. That means it will run on only the renewable energy it produces and, with the use of smart technologies, will promote sustainable living. Surplus energy will be sold to surrounding buildings, communities and cities, amplifying the green effect. It goes without saying that vehicles in this airport city of tomorrow will be electric and driver-less.

Of course, this ties closely with Norway’s broader plan to transition off its oil-based economy and move towards renewable energy. Electric cars are already the norm in Norway’s big cities – with electric airplanes soon to follow – so a smart city that incorporates technologies like autonomous vehicles, auto-lighting and automated mobility feels like a logical next step. 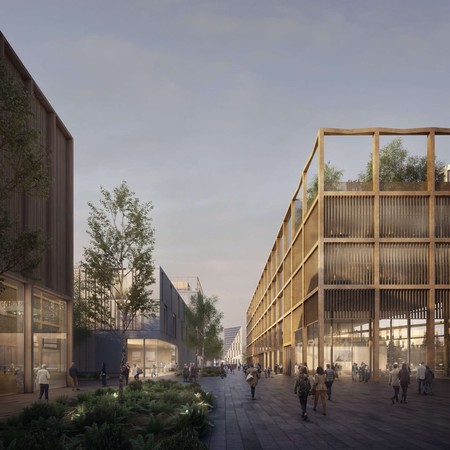 Besides serving as a “test bed” for renewable energy, OAC aims to be a livable city. Minimizing the distance between the center of Oslo and the airport, OAC will be a leisure destination with a central public park and a car-free city center, as well as robust public transportation. It is definitely an ambitious plan, and construction is expected to begin in late 2019. If all goes well, the first buildings of the city of the future will be completed by 2022. Looking at the visualisations created by Forbes Massie studio, we can’t wait to see what it’ll all look like in real life.