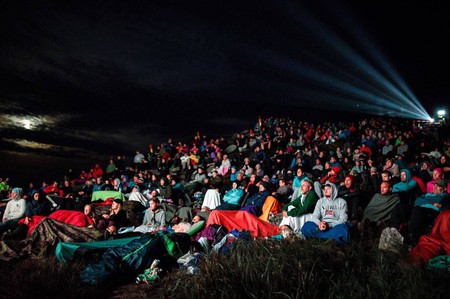 How long would you hike to see a special viewing of your favorite movie at the edge of a cliff? For 2,000 people in Norway, when Tom Cruise’s latest Mission: Impossible installment “Fallout” hit theaters worldwide, the answer was: “eight hours back and forth”.

Pulpit Rock, also called Preikestolen, is a mountain plateau that towers 604 meters above Lysefjord in Western Norway’s Rogaland county. It offers stunning views of the fjord and the surrounding area, but to get there you need to hike for four hours (and four to get back). Of course, a little bit of hiking never deterred the Norwegians, who are known for their love of exploring the great outdoors. And Pulpit Rock is one of Norway’s most famous attractions.

This is where Tom Cruise comes in. Last autumn, when Mission: Impossible – Fallout was still filming, the crew spent nine days filming at Pulpit Rock. The Norwegian tourist attraction features very prominently on the film, with a major action scene where agent Ethan Hunt, portrayed as always by Cruise, ends up hanging from the Pulpit Rock. The actor even used that image in one of his tweets when the movie trailer was about to premiere. As a result, many international viewers had the chance to admire the impressive cliff and a lot of interest around the location was created. And so a team of local enthusiasts worked for several months to make the impossible (pun intended) happen and organize a special screening of the film. 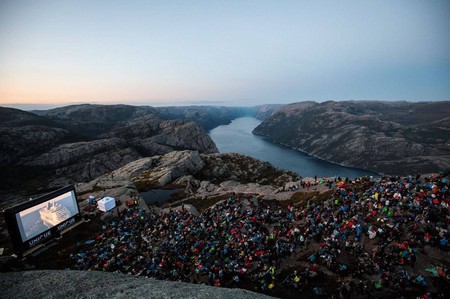 Tom Cruise wished he “could have been there”

The special screening of ‘Fallout’ was a unique way to not only experience a movie in an open-air cinema with a breathtaking view but also to be at the very same spot part of the movie took place. The screening, presented by the Forsand municipality, was no small feat. Two thousand determined Mission: Impossible fans hiked for four hours to reach an elevation of 2,000 feet and sit down on the rock to enjoy the movie. Paramount Pictures called it “an extra special screening” and Cruise himself said wished he “could have been there“. Although it would certainly be remarkable for agent Ethan Hunt to have appeared in the flesh, the people who attended the screening probably already had enough excitement, whether they looked at the screen or all around them. 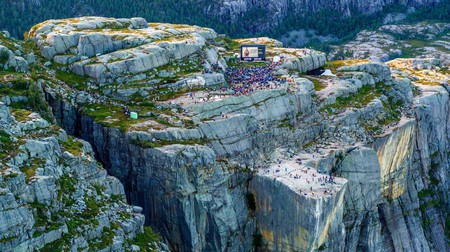 The special screening | © Paramount Pictures
Give us feedback