The Top 10 Things to See and Do in Trondheim, Norway

Previously called Kaupangen, Nidaros, and Trondhjem, Trondheim is the third largest city in Norway. It was the first capital of Norway, around 1,000 years ago, and it is consequently the best location to discover medieval Norway. Although Trondheim is an ancient city, it has a modern soul, and modern architecture and design are also popular. Here we list our top ten things to do and see.

Located near Trondheim Kunstmuseum, Nidaros Cathedral is the most significant church in Norway. It has been redesigned many times, so combines multiple medieval architectural styles. Its foundation date from the 11th century, the nave and choir are in the 13th-century Gothic style, with English influences. The artwork at the altar frontal is from the early 14th century, showing St. Olav’s life, and the sculptures around the church have French influences. There are numerous examples of pan-European and Norwegian artwork throughout the cathedral, making it a must-visit for medieval art enthusiasts. 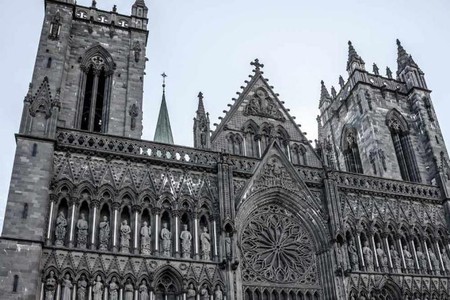 Situated inside the Stiklestad National Cultural Centre, Stiklastadir features many activities for the public. There is a farm which imitates a medieval village, with everyone costumed like town dwellers from the 11th century. It includes crafts, farm work, and games, as well as the option to learn fire starting skills and archery. Kids have the option to dress like knights and have a battle with swords and shields. An ideal way to spend an afternoon experiencing ancient Trondheim.

Ringve Museum is Norway’s national museum for music and musical instruments. It is situated in the historic Ringve Farm, which was the childhood residence of a Danish-Norwegian noble family. There are two permanent exhibitions. ‘The Manor House’, which shows European instruments such as the harp-piano, a type of piano favored by Beethoven and ‘The Barn’, which displays world folk instruments and popular music. Make sure you also pay a visit to Ringve Botanical Garden, where you can relax and view many types of Arctic flora.

Olavsfestdagene in English is the St. Olav Festival. It is the most significant festival in Trondheim, and commemorates the death of St. Olav at the Battle of Stiklestad. It is held at the end of July every year. During the medieval period, people would launch a midnight mass to celebrate this festival. However, nowadays people will invite renowned artists to perform in concerts and there is a service for Catholics to attend. It is the absolute best way to experience the Trondheim’s religious culture.

Rockheim was open in 2010 and is a brand new point of interest in Trondheim. Rockheim literally means the ‘Home of Rock’ and it illustrates Norwegian popular music from the 1950s to the present day through exhibitions, concerts, and interactive displays. The outside of this building is a breakthrough piece of design. A huge glass box was placed on the top of the pre-existing warehouse with LED lighting and music related graphic designs. It demonstrates the renewal of an old building with the most up-to-date artistic sense.

If you are looking for somewhere special to visit or to stay, ArtHotel Norway is a a great choice. ArtHotel Norway is a modular hotel, which has been temporarily constructed from 2014 to 2016. Each individual unit is an independent artwork for artists to design freely. It is flexible and allows the hotel to be adapted in urban and rural environments. From the exterior to the interior, it’s all about art.

Stiftsgården is situated on the Munkegaten road. It is the largest wooden structure in the Nordic region, with 140 rooms which spread across approximately 4,000m². This palace is constructed in a baroque style and features many neoclassicism elements. From the curtains to the tableware and the beautiful carpet, the venue exudes an understated elegance in every detail.

Shop
Facebook
Email
Twitter
Pinterest
Copy link
Share
Map View
If you are looking for special souvenirs, you should definitely pay a visit in Husfliden Trondheim. Located in Olav Tryggravason Gate, in the city center, the shop sells traditional and modern Norwegian art and crafts. You can buy a set of Bunad, a Norwegian traditional rural dress worn by both men and women, as well as modern minimalist Nordic fashion clothes.
Open In Google Maps
18 Olav Tryggvasons Gate, Trondheim, Trøndelag, 7011, Norway
+4773833230
Visit Website
Give us feedback

Haltdalen Stave Church is located in Sverresborg Museum and is a combination of two ancient churches from Ålen and Haltdalen. Made entirely of wood, the church showcases the single-nave stave church of the eastern Scandinavian style. The building style is extremely rare and it is the only one preserved. It perfectly demonstrates how the people built stave churches in rural Norway during the early Christian era.

Salmon fishing is significant in Norway and there are more than 600,000 Atlantic salmons in the Norwegian region every year. Trondheim is the perfect place to fish for fresh salmon. Stjørdalselva is one of the most popular rivers to catch these fish, and the peak season is from June to August. Many agencies provide fishing equipment for you to catch this yourself.
By Billy Lok Ming Poon