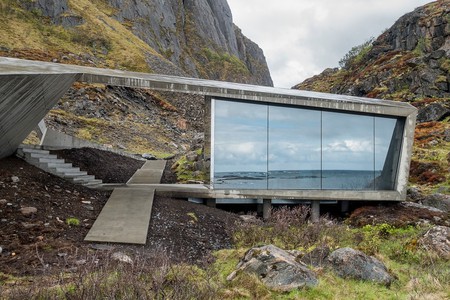 Norway has invested in creating state-of-the-art rest stops and viewing points along the country’s most scenic routes. One of the most recent ones, the public bathroom in Bukkekjerka along the scenic route of Andøya, blurs the lines between architecture and landscape.

On the Arctic island of Andøya, Vesterålen archipelago’s northernmost island, you can embark on one of Norway’s most beautiful scenic routes. Along the winding road, you’ll encounter a juxtaposition of breathtaking beaches where you can swim or kayak, moorlands that burst with cloudberries in the summer, and craggy mountains frequented by eagles. Andøya has a long tradition as a fishing place, and scenic villages such as Bleik will give you a sense of the daily life in the area.

But perhaps the most historically intriguing site in Andøya is the rock formation of Bukkekjerka. Located between Nordmæla and Nøss, at the Børhella promontory, Bukkekjerka is an old sacrificial site for the Sami. There are several tracks leading to the top of the rock formation, where you can sit on a bench and gaze at the open sea. You can also walk to the islet there and visit the unmanned lighthouses. And because this is Norway, the country where public bathrooms are works of art, there is also a restroom that’s open to the public from May to September. 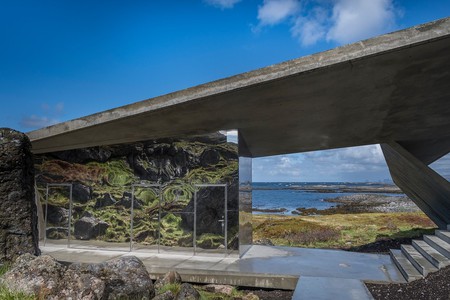 This particular public restroom was designed by Oslo-based Morfeus Arkitekter. The idea when materials were being selected was to choose something that would feel like a natural extension of the jagged, mountainous terrain. Concrete and steel indeed make the structure feel sturdy while being compatible to the landscape color-wise. The bathroom has strong irregular angles, making it an interesting sight to behold (and looking slightly different) from whichever direction you’re currently at. But perhaps the most striking feature is the mirrored exterior wall: it creates a trompe-l’œil, reflecting the scenery on the outside while working as plain glass that offers unencumbered ocean and mountain views from the inside.

The rest area in Bukkekjerka was unveiled last month, and there are already plans to utilise it further in the future as an event space – perhaps even for weddings, as there is an open-air church service taking place here every year. In the meantime, remember that despite the warmth of the Gulf stream you’re still in the Arctic Circle. If you’re planning a wedding or even a pit stop here, you should do so between May to September. 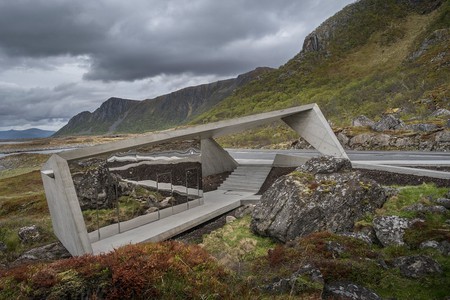