Norway has witnessed an architectural boom in recent years, which has seen a range of innovative and exciting projects pop up throughout the country. The Culture Trip surveys the best of these buildings, which have transformed Norway into an architectural laboratory. 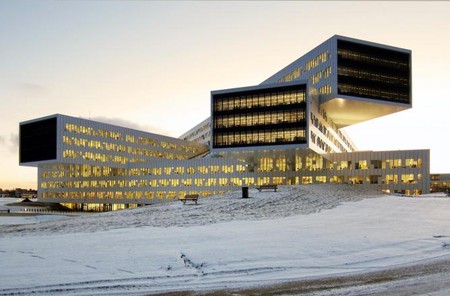 The unveiling of the new Oslo Opera House in April 2008 heralded the beginning of a new era for architecture in Norway. The stunning white marble building, designed by Norwegian firm Snøhetta, was an instant hit with locals and tourists alike (1.3 million visitors in the first year alone), and has won several prestigious international awards and prizes since then. A number of other projects in Oslo have also received the attention of the international media of late, none so much as the controversial Barcode. But the trend is not limited to the capital; exciting new buildings up and down the country are turning Norway into a top destination for architecture enthusiasts. We feature ten of the most striking buildings — some by home-grown talents, others by architects of international renown. 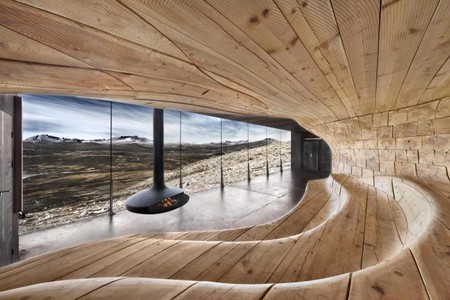 Snøhetta ranks among the world’s most sought-after and influential architectural firms, working on prestigious projects such as the new 9/11 Memorial in New York and the expansion of San Francisco MOMA. Much smaller in scale, but just as striking, is the Norwegian Wild Reindeer Center Pavilion. Located on the outskirts of Dovrefjell National Park, overlooking the mountain that inspired the architectural firm’s name, it stands 1,200 meters above sea level, and is accessible via a 1.5-kilometer nature path. With its curvy pine core and its full glass facade, the shelter provides ample seating for hikers and is an ideal observation platform from which to spot the herds of wild reindeer that roam the area. 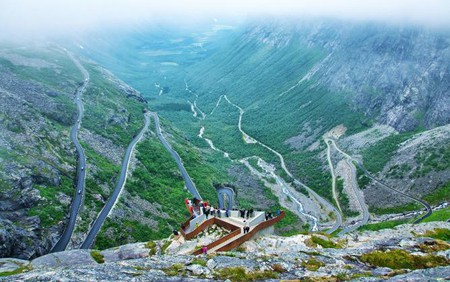 Driving, not hiking, around Norway? Norway’s new 18 National Tourist Routes blend stunning nature and modern architecture — much to the delight of visiting motorists. Financed by the Norwegian government, the project, which comes with a 3.5 billion NOK price tab, will be completed in 2020, but many stretches are already open. One of the most spectacular is the rest area at Trollstigen in Andalsnes, which affords a breathtaking view over one of the top tourist attractions in the region — a steep road famous for its 11 hairpin bends. The visitor center, the restaurant and the steel walkway leading out to the viewpoint were all designed by Reiulf Ramstad Arkitekter, and have received many plaudits since opening last year. 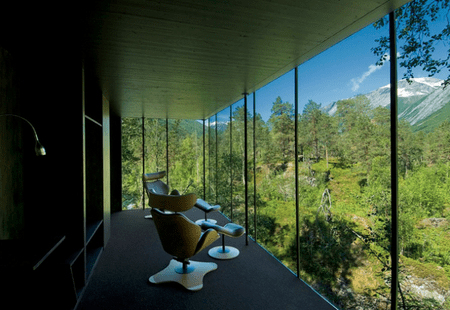 Some 20 kilometers southwest of Trollstigen lies another example of Norwegian architecture that perfectly integrates with its immediate surroundings — Juvet Landscape Hotel. Made up of seven small raised wood and glass box units scattered by the banks of the Valldøla River near the Gudbrandsjuvet Gorge, the hotel makes a perfect retreat for both nature and design lovers. With its huge panoramic windows framing the wilderness outside, offering some of the best hotel views anywhere, Juvet Landscape Hotel has won a number of awards and been featured in many international design and architecture magazines. 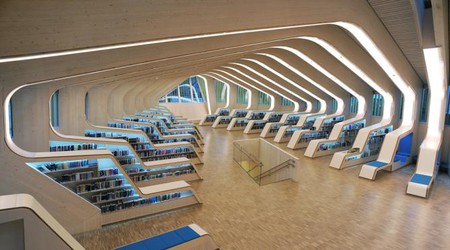 Wood has always played an important part in Norwegian architecture – unsurprising considering forests cover 38% of the country’s surface. A popular material, it is increasingly being used not just for homes and smaller buildings, but also in bigger projects. And no other Norwegian architects have mastered this material better than Helen & Hard. Buildings like the Norwegian Pavilion at the Shangai World Expo or Preikestolen Mountain Lodge attracted their fair share of attention when they opened, but it was the unveiling of the Vennesla Library in October 2011 that wowed architecture enthusiasts the world over. The library, in a small town in southern Norway, is a great example of modern wood architecture — elegant, functional and sustainable. The interior in particular is stunning, with its 27 timber ribs doubling up as shelves and benches, allowing plenty of natural light to flow in. 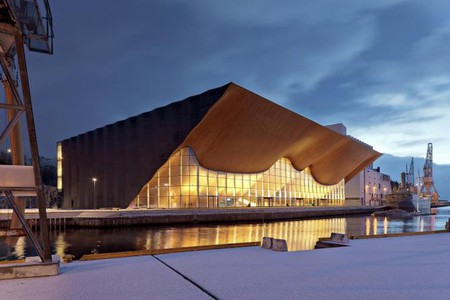 Not far away in Kristiansand, along the city waterfront, another building, opened in 2011, also features wood as an essential element, both inside and out. Over 12,000 planks of local oak, each one of them carefully numbered, make up the foyer’s curving wall, which juts out canopy-style over the building’s glass facade. The wall also defines the undersides of the three performance halls. These offer state-of-the-art acoustics, courtesy of the sound scattering wall treatment. The center was completed under budget and six weeks ahead of schedule. Kilden was designed by Finnish architects ALA Architects. 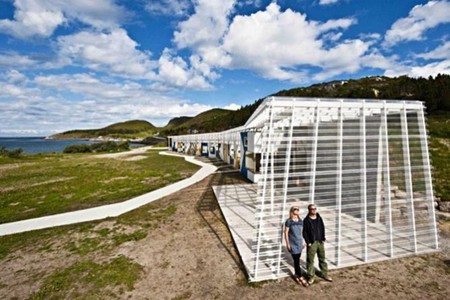 Also located by the sea, on a stretch of white sandy beach in Åfjord, Sør – Trøndelag, Stokkøya Sjøsenter has caught the eye of the international press. Designed by the architects who built the Rockheim Pop Centre in nearby Trondheim, Stokkøya successfully blends modern, minimalist design with bohemian beach living. The center, which has revitalized an entire community, also boasts strong eco-credentials. Partly built in the hillside and thus perfectly integrated in the landscape, its underground cabins, which occupy the foundations of a former concrete factory, feature recycled furniture and have been designed to use minimal energy. 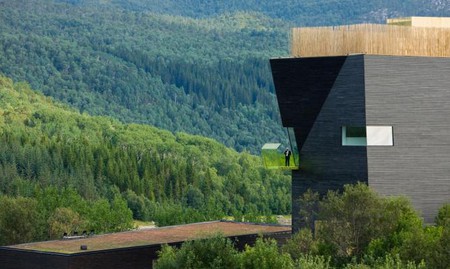 Knut Hamsun, who won the Nobel Prize for Literature in 1920, is by far Norway’s best known novelist. The center dedicated to his life and work was completed on August 4th 2009, the 150th anniversary of his birth. Located near his childhood home on the island of Hamarøy in Nordland, the six-floor tower (and adjacent auditorium), was built by American architect Steven Holl. The aim was to give shape to a Hamsun character in architectonic terms, hence those familiar with Hamsun’s oeuvre will find echoes of his texts in the building itself. Elements of traditional Norwegian architecture, like stave churches and sod roofs, are also evident in features like the dark exterior timber cladding and the reeds on the rooftop terrace. The center is surrounded by nature that is little changed since Hamsunʼs days, and offers impressive views over the area that inspired some his most famous works. 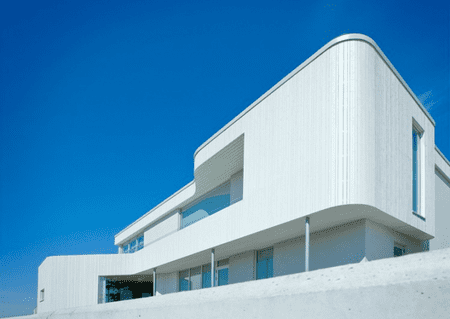 It is not just public projects, though, that have attracted talented architects. This private house just outside Bergen was built by Canadian architect Todd Saunders, a long-time Norway resident. Described by Wallpaper* magazine as “a little slice of the Hamptons on the North Sea,” the child-friendly villa in Hjellestad boasts a huge play area, an indoor climbing wall and anti-slip stairs, as well as hidden storage and an eight-metre long kitchen bench. Reminiscent, through its clean lines and colour, of the funkis style popular in Norway in the 1930s, the house, which happily blends traditional material with technology, is distinctly modern in appearance. It was completed in 2009. 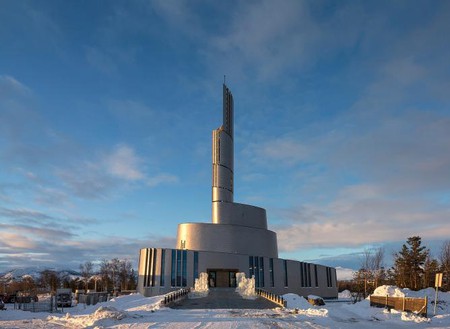 Cathedral of the Northern Lights, by Schmidt Hammer Lassen and Link Arkitektur (2013)

For their first building in Norway, Danish firm SHL (the people behind the acclaimed Aros Museum of Art in Aarhus and the National Library in Copenhagen) collaborated with renowned architects Link Arkitektur. The brief they received from Alta municipality was to create a new architectural landmark that would highlight the region’s status as a top destination to view the northern lights. Hence the spiraling body of the cathedral, which winds up on itself to form a pointed belfry 47 meters above the ground, reminiscent of the twirling shape of aurora borealis. Titanium was chosen for the exterior of the church to reflect the northern lights dancing in the sky in the long Arctic winter months. The cathedral was officially opened in Feb 2013 by the Crown Princess of Norway, Mette-Marit. 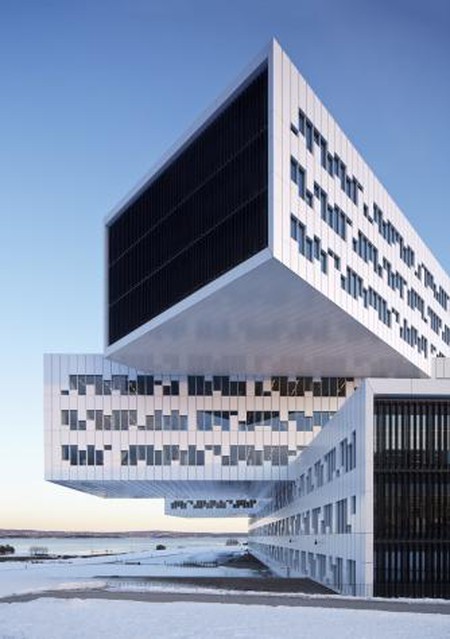 Back in the capital, the Oslo offices of Norwegian state-owned oil company Statoil officially opened in October 2012. Home to some 2,500 employees, the new office building is located on the site of Oslo’s former main airport in Fornebu. The unusually shaped building reflects the company’s daring pioneering attitude. The structure consists of five blocks, each one of them three floors high, 140 meters long and 23 meters wide, stacked on top of each other. Large-scale art by international artists in and outside the building was a key element in the design, the idea being for both employees and visitors to be inspired by quality art and architecture.