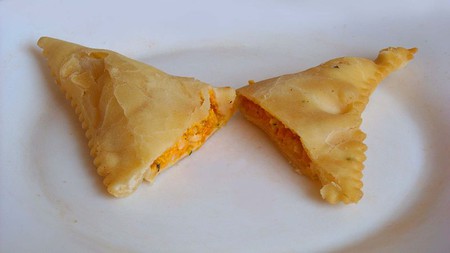 Barbagiuan is a savoury, filled pastry originating in Monaco and is mainly found in the eastern part of the French Riviera and in northern Italy. Read on to discover more about Monaco’s delicious national dish.

Barbagiuan, in the Monegasque language, means ‘Uncle John’. It is thought that, long enough ago for the story to become the dish’s folklore, someone named Jean didn’t have a sauce for his ravioli and so stuffed it with Swiss chard and fried it instead. This new creation spread in popularity and became known as ‘Barbagiuan’ – a nod, in name, to its famous culinary creator. Across the border, in Italy, this pastry is called ‘Barbagiuai’ and the main difference is that it is filled with pumpkin.

What is Barbagiuan made of?

There are two elements to Barbagiuan; the pastry and the filling. The two main ingredients that make up a traditional Barbagiuan are Swiss chard and ricotta, but there are various fillings – rice, onion, Parmesan cheese – that you’ll find included, too. Despite its original recipe, many Monegasques will have had the recipe passed on down to them, so each family batch of Barbagiuan will have its own unique touch.

Being Monaco’s national dish, Barbagiuan is most notably eaten on the principality’s national day, on November 19. On a daily basis, Barbagiuan is considered an appetiser or a small snack, so you’ll find it in the markets of Monaco. If you’re visiting, head to La Condamine market, or find it served as a starter when eating out.

More recently, the Fete du Barbagiuan – a festival of all things Barbagiuan – has been set up to celebrate and educate on the national dish. Cooking demonstrations, classes and events are put on by A Roca, a company that promotes regional gastronomy.