The Best Things to Do in Skopje 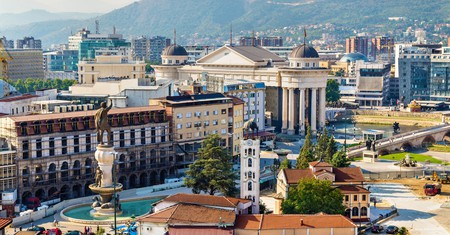 Known for its warm hospitality and penchant for colossal (if controversial) statues, North Macedonia’s energetic capital, Skopje, is making a name for itself as a city break destination. Visitors can get lost in the old bazaar, explore the Kale fortress and take in the rugged beauty of the nearby Matka Canyon, before sampling some of Macedonia’s finest rakija.

In 2010, the government announced a plan to reinvent Skopje. As part of the Skopje 2014 revamp, hundreds of statues popped up across the city centre, and many of the city’s most important buildings were given a neoclassical makeover. While this project was controversial due to its cost, timescale and what might be described as nationalistic kitsch, the results make for interesting viewing. Start a tour of the city centre on Macedonia Square, where you will find a 22m-high monument. Titled Warrior on a Horse, the colossal statue is generally understood to represent Alexander the Great. From here, cross the Vardar River via the Art Bridge, with its 29 statues of Macedonian artists and musicians, or the historic Stone Bridge, built on Roman foundations between 1451 and 1469. Once on the right bank of the river, gaze in awe at the Museum of Archaeology with its Greek Revival architecture and the newly constructed National Theatre, which is designed as a replica of the former theatre destroyed by the 1963 earthquake. 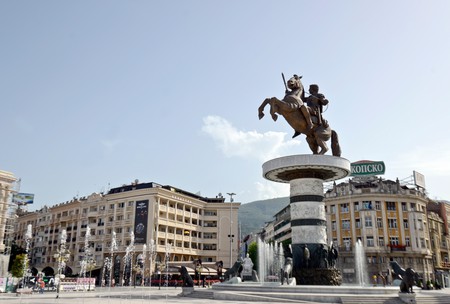 Immerse yourself in Skopje’s museums

Start your cultural journey near the city centre at the Memorial House of Mother Teresa. This Albanian-born modern-day saint, Roman Catholic nun and missionary hails from Skopje, and the house she grew up in stands today as a museum in her honour. Exhibits include letters, photographs and artworks, while the on-site glass-walled chapel holds mass twice a week. 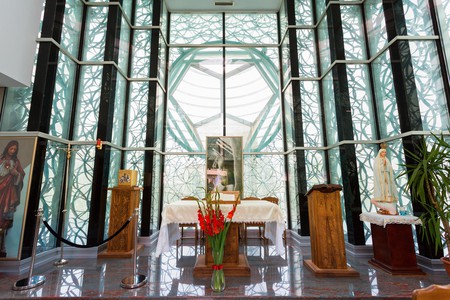 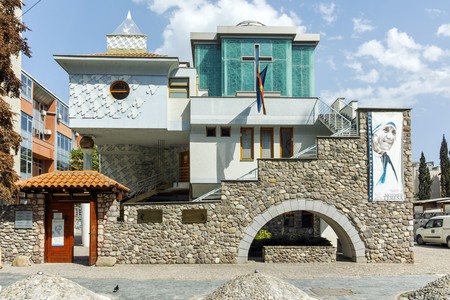 Mother Teresa grew up in this house, which is now a museum dedicated to her life | © stoyanh / Alamy Stock Photo

With architecture as interesting as its exhibits, the Museum of the City of Skopje is located in a former railway station that was partly destroyed in the devastating 1963 earthquake that saw around 80% of the city destroyed. The museum tells the story of Skopje, from the first recorded settlements around 3000 BC to the present day.

Cross the Stone Bridge and head over to the other side of the Vardar River to find the Archeological Museum; the Museum of the Macedonian Struggle, which memorialises the country’s history of occupation; and the Holocaust Memorial Centre for the Jews of Macedonia. At the entrance to the Old Bazaar stands the Museum of Macedonia – a mammoth institution comprising ethnologicial, archaeological and historical exhibits. 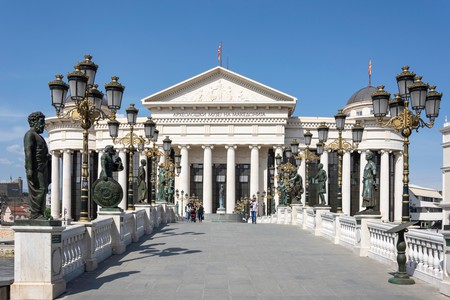 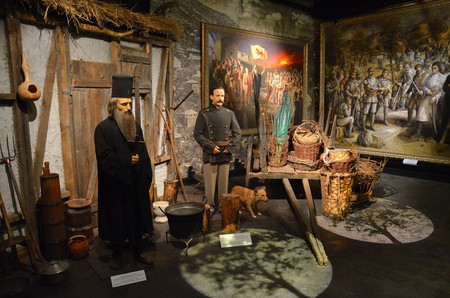 Whether opera, drama or classical music is your thing, Skopje does not disappoint in its cultural offering. The National Opera and Ballet has a rich year-round programme, and is worth a visit if only for its architecture. Designed by Slovenian architects Biro 71, the building’s white concrete form is designed to evoke mountain peaks. In addition to opera and ballet, the venue hosts classical music and theatre productions. Set close by, just off Mother Teresa Square, the Macedonian Philharmonic Orchestra resides in a state-of-the-art concert hall built as part of the city’s recent revamp. 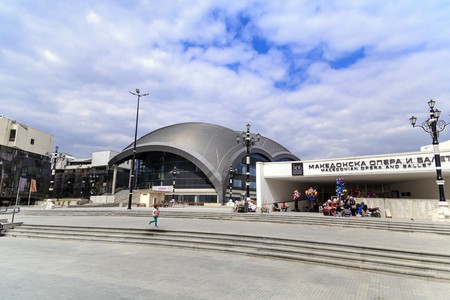 Admire Skopje from up high

To combine history with panoramic views, head to the Kale Fortress. The highest point in the city proper, the fortress dates back from as early as the 6th century and offers views across the Vardar River and city centre. Alternatively, the looming Mount Vodno – visible from almost everywhere in the city – offers scenic vistas and a fresh air fix. Hike one of the many well-kept trails to the top or make the ascent via a leisurely cable car ride to reach the Millennium Cross, a 66-metre-tall cross, built in 2002 to commemorate 2,000 years of Christianity in North Macedonia. On the western side of Vodno, the village of Gorno Nerezi is home to the 12th-century Sveti Pantelejmon Monastery. Top tip: Mount Vodno is at its peak beauty in autumn, when its slopes are adorned with a rich palette of oranges and yellows. 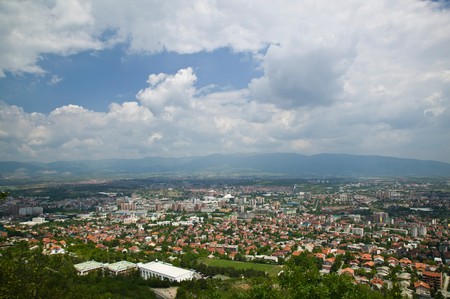 Step back in time at Skopje’s Old Bazaar

The largest bazaar in the Balkans and Skopje’s trading centre since at least the 12th century, the Old Bazaar is a maze of small streets packed with cafés, jewellery shops, bakeries and haberdasheries. Its quaint cobbled lanes and passageways are punctuated by statuesque minarets, and home to a number of hidden treasures: the rose garden of the Ottoman-era Mustafa Pasha Mosque, the Suli An arts centre with its tranquil courtyard, and the 13 domes of the Daut Pasha Hamam, which is now home to the National Gallery. To get a taste of Skopje café culture, sample honey-laden baklava at Slatkarnica Ohrid or a strong Turkish coffee at Nargile.

Shop for souvenirs at Bit Pazar

Whether you’re in the market for trinkets, colourful textiles or fresh fruit and vegetables, Bit Pazar is certainly an unforgettable retail therapy experience. One of the largest outdoor markets in the Balkans, and with a history dating back to the 14th century, Bit Pazar can be found at the northwestern edge of the Old Bazaar. Haggling is the name of the game here, so don’t be afraid to barter for the best deal.

The next step in discovering Skopje’s old town involves discovering traditional Macedonian cuisine. The best place to find authentic dishes is undoubtedly at the Old Bazaar, where you can sample kebabs, hearty local bean dish tavče gravče, gevrek sesame bread and burek – layers of thin flakey dough filled with minced meat or with cheese. Kaj Serdarot, on the southern fringes of the bazaar, serves a simple but excellent menu of local fare, which is best washed down with a local beer or wine. 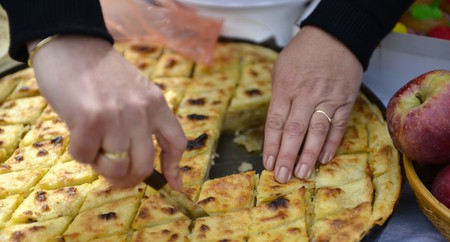 Discover the spirit of Debar Maalo

Situated just west of the city centre, Debar Maalo is a vibrant neighbourhood that is at once leafy and urban; night clubs and start-ups stand just steps away from the seemingly endless lawns of the City Park. Any visit to Debar Maalo should start with Aminta Treti. This popular street is a cornucopia of bars, cafés, and bohemian restaurants with traditional live music. Drop into Casa for an al fresco coffee or beer, and enjoy live music every Monday at Kino Karpoš. If you are up for some late-night partying, head on to Balet – a nightclub known for its lively yet casual vibe and rock-based DJ sets. Check out the rest of the best restaurants in Skopje.

Get a taste for rakija

It’s nearly impossible to make it through a visit to North Macedonia without sampling that quintessential Balkan staple: rakija. A distilled spirit made from fermented fruit, in North Macedonia rakija is generally made from grapes. A great place to start your adventure in rakija is the Old Bazaar’s Rakija Bar Kaldrma. This charming drinking place has abundant old-school charm and even more plentiful rakija – more than 30 varieties, to be precise. Pair a glass of rakija with a traditional shopska salad – peppers, tomato, cucumber and onion sprinkled with a feta-esque white cheese called sirene – for the ultimate appetiser. 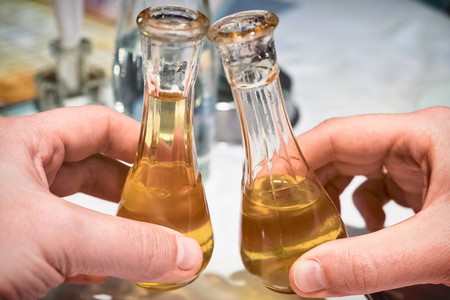 Escape the city at Matka Canyon

Just a 40-minute bus ride outside of Skopje, Matka Canyon is an ideal day trip destination from the North Macedonian capital. Here the River Treska has cut through the rugged landscape to form a steep gorge that, since the construction of a dam in 1938, has housed the country’s oldest man-made lake. Matka Canyon is a hotspot for outdoor activities, with kayaking, fishing and hiking all on offer. For a gentler journey through the canyon, boat trips take visitors along the lake to the Vrelo Cave, famed for its intriguing mineral formations – look out for the famed ‘pine cone’ stalactite – and its incredible depth. Along the banks of the lake are several historic churches and monasteries, the most famous of which are the 14th-century St Andrew’s Monastery and Matka Monastery. To get to Matka Canyon from central Skopje, take bus no. 60 from the main bus station. 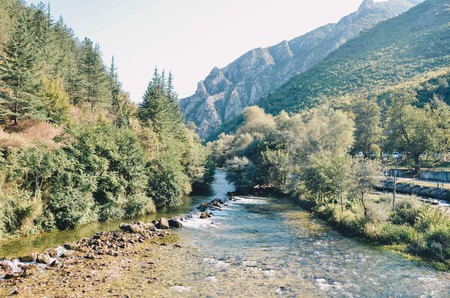