Luxembourg's Golden Lady: Everything You Need To Know

Gëlle Fra is the nickname given to the Monument of Remembrance, a war memorial situated in the heart of Luxembourg City. The memorial, created by the Luxembourgish sculptor Claus Cito, was initially meant to commemorate the fallen Luxembourgish soldiers who volunteered in the French army during World War I. However, due to subsequent events it also turned into a memorial against Nazi rule and nowadays commemorates war victims in general. 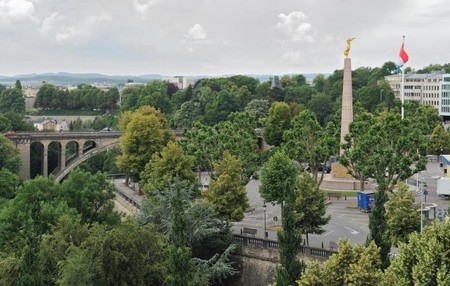 Luxembourg City: Constitution Square seen from the tower of the Notre-Dame Cathedral | ©Cayambe

In 1920 the National Monument Commission launched a competition for a monument dedicated to Luxembourgish soldiers who fought as volunteers in the French army during World War I. Among the 18 submissions, Claus Cito’s design entitled ‘Queen of Freedom’ (Friddenskinnigin in Luxembourgish) was selected. Its base comprises two male bronze figures, one representing a fallen soldier and the other showing his mourning compatriot. The middle piece is a 21 meter high obelisk, the top of which stands the gilded bronze statue of the Golden Lady.
Inaugurated in May 1923, the monument that stood for the country’s independence was targeted for destruction by the Nazis who occupied the country in May 1940. In October 1940, amidst the loud protests of hundreds of students, the statue was knocked down and removed by a steamroller. 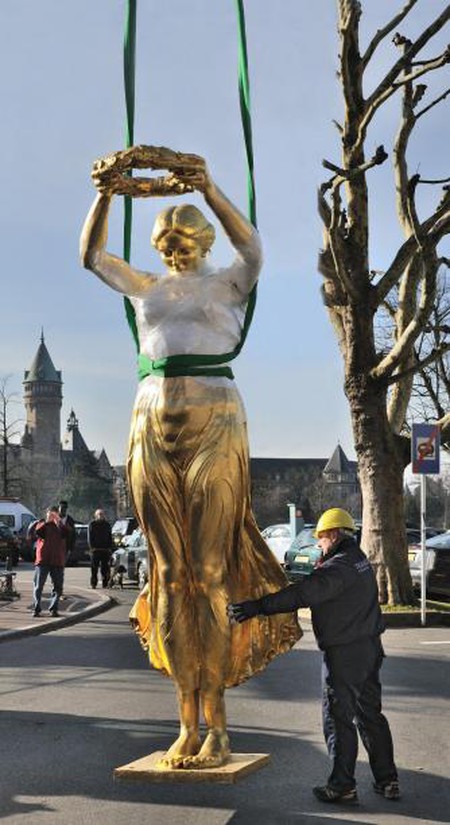 Luxembourg City, Constitution Square, March 3 2010: the statue of the so-called Golden Lady is removed from the obelisk, to be restored and brought to the Luxembourg pavilion at the Expo 2010 in Shanghai | WikiCommons

After the war, plans were made to re-erect the monument, yet it would be impossible without the Golden Lady who, after briefly appearing in an exhibition on the Resistance in 1955, had suddenly disappeared. Only decades later, in 1981, were the fragments of the Golden Lady found under the tiers of a football stadium. After gathering donations via a national campaign, the statue that had come to embody Luxembourg itself was renovated and reinstated on 23 June 1985.
In 2001, Croatian artist Sanja Ivekovic whose public works critically explore issues of womanhood, symbolism, and otherness, set up her ‘Lady Rosa of Luxembourg’ in immediate proximity to the Gëlle Fra, generating a storm of controversy. Whilst the title of the statue alludes to the German philosopher and Marxist theorist Rosa Luxemburg, its form is an exact replica of the Golden Lady, the sole difference being that the former is pregnant. The artist’s aim was to illustrate the situation of women within society; the text at the base of the monument refers not only to the different roles and attributes ascribed to women, but also to the stereotyping labels given to women such as ‘whore’ and ‘virgin’. The pregnant form of Lady Rosa refers to the child-bearing role of women as well as to the sexual violence they face. Some people, though, felt that the statue of a second Golden Lady undermined and even distorted the patriotic message of the original Lady. After a series of heated debates Lady Rosa was eventually dismounted from her pedestal.
In 2010 the original Golden Lady was also dismantled – temporarily – and shipped to Shanghai, where she was exhibited in front of the Luxembourgish Pavilion at the World Expo. Likewise, her counterpart Lady Rosa re-emerged from notoriety in Luxembourg to reappear in New York City where she can currently be admired in the exhibition titled ‘Sweet Violence‘ at the MoMA in New York, which is featuring the works of her creator Sanja Ivekovic.